Dukascopy Touch Binaries contest (the «Contest») is a competition between participants using Binary DEMO accounts for Touch Binaries trading. The Contest is conducted regularly on a monthly basis. The participants are ranked by their monthly profit.

The total prize fund is 10,000 USD to be shared among the 15 winners. The winners are defined by their maximum profit at the end of the contest period.

Other rules and policies

For feedback, questions and comments please send an email. 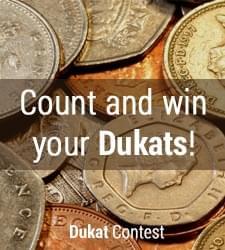