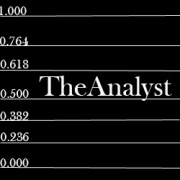 Looking at the monthly chart we are going for a bullish prediction for October. The pair broke through a channel and the MACD has turned positive.

Worrying signs for a bullish prediction include the timing and the MACD indicator. The timing is that the broken channel happened on the news about Turkey and the diving Lira. On top of that we don’t have a solid confirmation since the monthly close is in a couple of weeks. As for the MACD indicator it has turned at a level where it could easily turn back again.

We assume September will either be generally bullish with the currency moving up or it will stall at the 50% level before or after it tries for the previous lows at the 38.2% Fibonacci level. In this case the bullish forecast will be in jeopardy but not dead yet unless there’s a solid close within the channel by the end of the month.

Looking at the weekly chart a correction below the 61.8% level would be a bear sign. We assume the bullish move will continue and the pair will retry the previous high at around the 127.2% Fibonacci level either by the end of August (day of this forecast is August 20) or sometime in September.

Based on those assumptions we choose the 15.2565 price for our prediction.