Community
Article contest
Forex Minotaur: a Hidden Threat in Learning from the Web


Internet is the biggest and the most accessible door to the trading
world, and in the same time is the largest source of disorientation and
sidetracking for an aspiring trader.

In recent years, the
popularity of the Forex has grown
considerably and the same has happened with the FX trading
stuff on the internet. For new candidates in this business, the web is
usually the first site of contact with Forex, and while they are
beginning to realize its immense lucrative potential, they are already trying
to find out more through the net…

But what are the limitations of this research and what consequences may arise
for beginners?

I am very confident in saying that in my opinion, for an alone novice
trader, undertaking a study on how to successfully trade Forex, based essentially
on readings of stuff on the Internet, is a so great and danger ordeal as that
of Theseus, in the Labyrinth of the Minotaur myth. At first glance, this
statement may seem extremely exaggerated because we are very accustomed to rely
in the resources of the network, but perhaps with a slightly deeper analysis,
this idea will not seem so impossible.

What I am sure is that most of aspirant traders felt lost in the
crepuscular world of the market, where no way seems never fully safe, and despite
of its simplicity, they perceived there is a part of the Forex that always stays
unreachable to them and even, if market can sometimes be generous, being devoured
emotionally or financially in the FX, is what inevitably happens more easily… 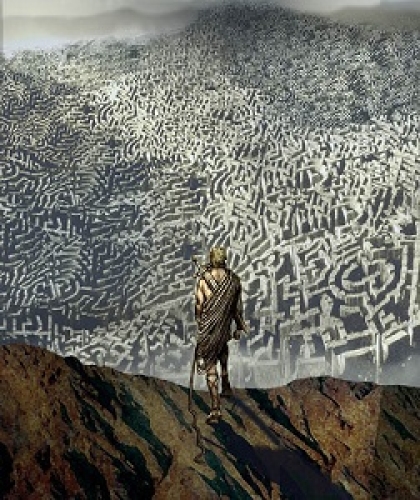 The stuff about Forex, commonly shared in the web is far from being a
serious solution for all this pains. Let’s don’t be naïve and stop thinking
that we may find easily and for free any really worth detailed publication on
Forex researches or information. Probably the fastest way to get something truly
valuable for our trading business, is to generate it from ourselves.

So, let’s take a look on the web. What one notices first is that a very
large part of the materials related to Forex are in some marketing context. Many
try to make money “around” the Forex and not in the Forex. So there is a lot of
material derived from this activity; marketing is very important in every
business, but it is obvious that “to teach” is not what it pretends. For a
novice it is much easier to be confused, false impressed, or simply led to “bit
the bait” in similar contexts. In any area, beginners lack enough basics to
discriminate correctly, being unable to put the right value on things. This is
one of the reasons why an aspirant trader is dangerously exposed during random
web surfing.

On the other hand, anyone may write whatever he wants on the net, with
no assurance that what would be written will correspond to something real or
truth. But… as it is known and stated in many different sources, great majority
of people lose money in Forex. Now, If we accept that the biggest part of market players consistently lose
money, this should also mean that a corresponding proportion of majority of
Forex stuff on the internet has to be valueless. Otherwise said, by
logic definition, an average FX material on the web statistically will not
bring to us any significant help in order to be successful investors. This
average and typically mediocre FX information is growing every day, contaminating
more and more the web, making increasingly difficult the correct concepts assimilation
for the new entries in our club…

When information is too huge and ambiguous, what is really important
disappears into the sea of millions of photocopied and cloned subjective
concepts and opinions. This type of pollution is a very serious obstacle for
the trading aspirant, because it hides “the juice” of the matter, contaminating
him with garbage information, which easy penetrates his brain because of his
actual lack of sufficient criteria for the matter. This contamination is
apparently invisible, and a person is usually unable to free himself from it,
not even realizes this fact. For sure, too many traders will be surprised to
know that their trading failures has very probably a lot to do with this
phenomenon. In order to be profitable as traders, we need our mind to be clean
from informative contamination, which tends to choke our creativeness and
intelligence, very important tools in our work. Internet is actually the major
source of this type of pollution.

Web researches are useful of course, but if a trader centers all his
focus and method in the internet trading universe, it is quite sure that he
will limit very much himself and his possibilities of success. Transcending
common average approaches and ideas, cheaply diffused in mass pool stuffs, may
became one of the keys for a superior trading performance and important increase
in personal wealth, avoiding to be trapped in a labyrinth of ambiguity. Knowing
that somebody in the London session, or during the New York one will move the
market is a good data, but it is not enough to be rich! Same for collecting
hundred of technical indicators while lacking the right criteria to combine and
apply them. 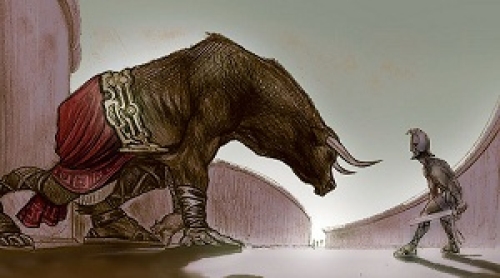 Venturing alone at the beginning of our trading journey may result very
dangerous, since the labyrinth is very insidious and the lack of external
secure landmarks may lead us to be defeated in the game. We know that this is
what happens every day to the great majority of Forex new investors and that it is
not a fantasy. Internet is much more dangerous thing than how it appears. It
seems to have a great ability to inform people, but if we observe it from some
different angle, we will realize that most commonly internet misinforms and
disorients them.

Forex Minotaur eats people’s time, money, integrity, health and energy…
he feeds himself from their emotions, their illusion and dreams. In the legend,
Theseus overcame his ordeal with the help of Ariadne, who gave him a wire, which
was vital to find the way out from the Labyrinth... Probably the best help for
a novice aspirant investor is the support of an experienced and successful
trader, internally focused beyond masses wavelength and able to orient him to
something better. This reference will be essential, until the novice trader
gains sufficient criteria to be able to walk alone safely and wisely.