Forex market is an around the clock market which opens to
trade at 5PM EST as Wellington opens to trade on Sunday and closes at 5PM New
York on Friday along with New York session. 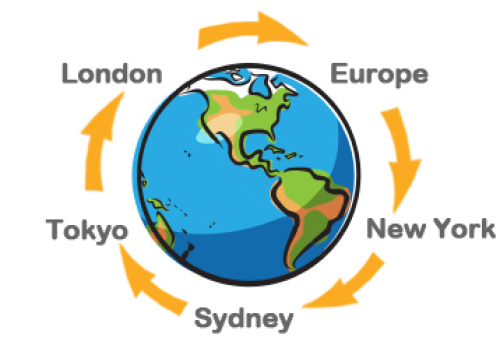 What difference does it make?

There are two types of arguments for this. While one group
suggest that since the Forex is a 24 hour market, one can trade at any time and
can take trading as 2nd source of income whom I consider as traders
with  positive attitude.

On the contrary, another group says it is impossible for a
retailer to track every single market movement and make an immediate response
at all times.

So, now the question arises is when to trade Forex. In this
article I would describe the time zones, effect of that and how to tackle the
market.

Timing is important in currency trading. To devise an
effective and time-efficient trading strategy, it is important to note the
amount of market activity around the clock in order to maximize the number of
trading opportunities. Price of a currency is always dictated by liquidity
i.e., demand and supply. It also depends on the geographical locations and
macro economic factors.

Institutions around the world typically open to work in the
morning and closes in the evening of their geographical location. While it is
morning in Japan, It is mid
night in Europe and late evening in US. So, it
is best to understand the timings of institutions working hours and trade
accordingly.

Depending on the Geographical regions, Forex market has been
divided into 3 zones.

The above zones may be sub divided in to 2 based on the over
lap of the timings. 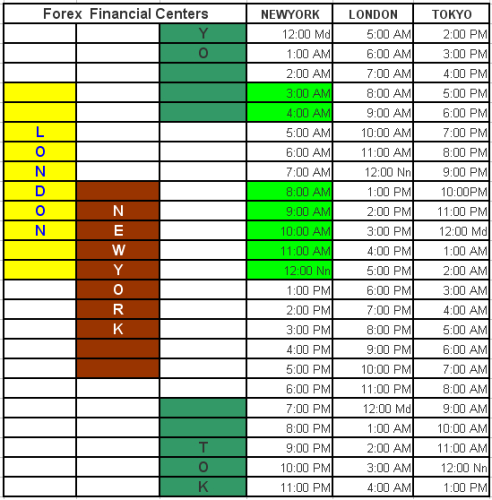 Let’s discuss the above in detail

Asian /Tokyo
Session:
Opens at 7PM EST time and Closes at 4.00 am EST.

Let’s follow the sun and Sun rises on the east and so is the
Japnese session. In this session, the major regions where forex is traded are Sydney, Tokyo, Hongkong and
Singapore.
With the influence of the Japanese central bank on the FX market, Tokyo remains one of the most important dealing centers in
Asia. Hence we can call the Tokyo as the Capital of Asian session. Trading
in Tokyo is
usually thin many a times; but large investment banks and hedge funds are known
to try to use the Asian session to run important stop levels.

Major news releases for New
Zealand, Australia,
Japan, and China come out
during the Asian session, so the NZD, AUD, and JPY currency pairs tend to move
more than the others during the Asian session. Even though china doesn’t allow
free float of their currency, the news release may hit the valuation of major
pairs due to their economic policy. Japan being highly dependent on
exports, market participants in this session is comprised of Companies and
Central bank and in their absence, market tends to be thin. Markets will be
active in the first week and last week of the month as most of the transactions
of companies occur in those periods.

While Asian people get ready to shut their shops, People in London wake to charge. London is the largest and
important dealing centre in the world with over 30% of the volume coming in
this session. There are several financial centers across Europe but most of the
dealing desk of large banks are located in London due to its strategic location and in
fact is called the Forex Capital. The majority of major FX transactions happen during
London hours because
of the high liquidity and pricing efficiency

Just as the London
goes for Lunch, Americans will be active after their Break Fast. This is the
most important session in a day as most of the currencies are quoted against
USD. The majority of the transactions during the U.S. session are executed till
noon, a period with high liquidity because European traders are still in the
market. Most of the news release from Canada,
United States of America
during this session, so the USD and CAD pairs are mostly active.

About 85% of all Forex trades involve the U.S. dollar, so
any currency pair involving the USD has the potential to make a big move during
the New York
trading session.

After European markets close, volatility and liquidity tend
to dry during the late-afternoon New
York trading session and the spread increases
dramatically.

Asian-European overlapping session:
Occurs from 3.00 AM EST to 5.00 AM EST

The trade intensity in the Asian-European overlap is lower
than in any other session because of the slow trading during the Asian morning.
Of course, the time over lapping period is also relatively smaller. With
trading thin during these hours, traders take a two-hour nap or spend the time
positioning themselves for a breakout move at the European open.

EUROPEAN-U.S Overlapping Session:
Occurs between 8.00 AM EST and 12.00 Noon EST

Markets tend to be most active when the hours of the world's
two largest trading centers overlap.  This session constitutes on average 70 percent
of the total trades of trading for all of the currency pairs during the
European trading hours and 80 percent of the total trades for all of the
currency pairs during U.S.
trading hours. Just these percentages alone tell day traders that if they are
really looking for volatility and wide ranges and cannot sit at the screen all
day, the time to trade is the U.S.
and European overlap.

The majority of all economic reports are released around the
start of the New York trading session since
both Europe and New York
are open at this time. All USD and CAD economic news comes out during or near
the New York
trading session.

It is typically the most active trading session and this
leads to high liquidity and volume and lower pip spreads. 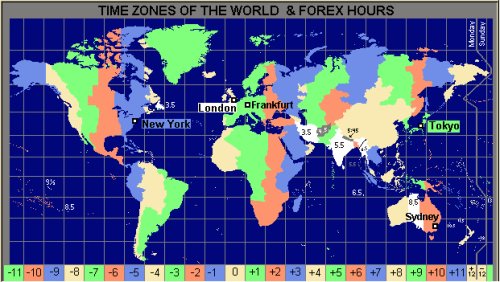 How to make use of these different Time Zones:

Do you have second opinion on the article? Please share your
opinions by commenting as it will help me as well as others to learn.