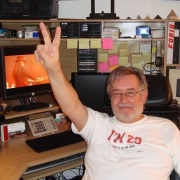 My Canadian business story 2 ... or how philosophically I found myself in the Forex trading.
In the first part of my story, I told you in details what I went through to get at my age to Forex as something, that I can now confidently call my business. In this second part, I shall try to interpret why I think so. We all have dreams, ideals and values. How often, however, we realize that they are crystallized clearly in our minds? The ancient Greek philosophers once said that:

"Happiness is the purpose and meaning of life, the overall sense of human existence."
When thеy have meditated on happiness, perhaps they did not mean just a cloudless and easy-going life. In fact, they connected it mostly with personal fulfillment. But this interpretation does not preclude the fact that the happy person sometimes also goes through periods of delusions, loss and sadness, depression and disappointment. What ultimately makes us feel happy is the profound and full sense that we are standing on the right path in life - the feeling that we are doing what we have skills and vocation for. In this context, according to the Greek philosophers, the opposite sense of happiness is not just sadness and desp
…
خواندن مقاله
ترجمه به انگلیسی نمایش اصل Toggle Dropdown

The Woe Teaches (nevolya –“ woe”, “The hardship in life “ in Bulgarian language)
I would like to start my Forex business story with one of the most famous Bulgarian folk tales:
Once upon a time, there was an old woodcutter who had two sons. Every time he went to the woods, he took along with him one of them as a helper.
One day, the woodcutter put the oxen to the oxcart and told his sons: - Come on, guys, go alone to the forest for firewood. I shall take a rest because I am very tired.
The boys were delighted that they could replace their father and drove the oxcart to the woods. Starting on their way, the elder son turned his back and asked his father:
- Dad, if we damage the oxcart, who will fix it?
- Do not worry, - replied the father - if it breaks, call the Woe, She will fix it.
The boys went to the woods. They released the oxen to graze and grabbed the axes. They started to cut quickly and chopped a lot of firewood and the oxcart got overloaded. The boys put the oxen to the cart and started their return home. Suddenly, just in mid course, the overloaded oxcart crashed and fractured the draw-bar “.What a mess! “How shall we drive back with this overloaded cart?”, asked the yo
…
خواندن مقاله
ترجمه به انگلیسی نمایش اصل Toggle Dropdown