Overview:The past few weeks have seen a total and utter capitulation across the financial markets, the recent elections from France and Greece has lead to the "risk-off" environment that is evidentially being seen. The USD and JPY have been well bid over the past few weeks as investors seek safe haven's where their money will be relatively safe.For example US 10 Yr Government Bonds have risen in price dramatically, and a cause of this has seen the yield fall from well over 2% to 1.72% (at time of composition). Alongside this the VIX - The measure of volatility and predicted Rate of Change of the S&P500 on an annualized basis has risen dramatically.Overall the past few weeks have been very interesting and have provided much opportunity to trade effectively across the asset classes. EUR:Seen worldwide as one of the most liquid, highest volume securities, the EUR has come under tremendous pressure against the USD and JPY. The fall started with a "gap" down after Hollande was elected as president of France sparking fears of political discord between Merkel and Hollande. This fall was exacerbated by increasing fears from Greece.On a technical basis, It seems that a short cover rally is … 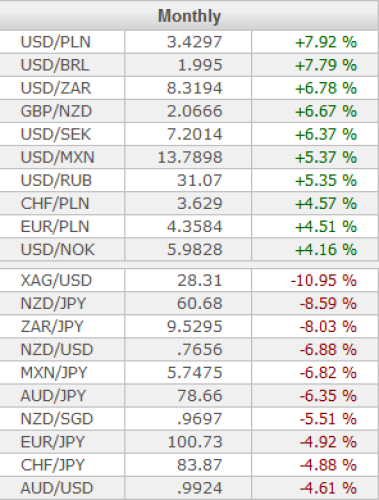 Forex trading is simple to learn, and anyone can acquire the skills to trade successfullyFirstly look for realism, don’t be deceived by people telling you that you can make a fortune with no effort – you can’t. If you want to get a course in currency trading then it is up to you to learn the logic, understand it, have confidence in it and apply it with discipline,If you are a Forex Trader than you need to liquidate losing trades quickly and run profitable trades to pile up big long term profits. Many traders don’t know how to do this and this section will give you some basics to follow and advantages and disadvantages of various methods. If you have read the section on Technical Analysis then you will understand that you can build substantial long term profits Most traders use technical analysis to get a "big picture" on an investment's price history. Even fundamental traders will glance at a chart to see if they're buying at a fair price, selling at a cyclical top or entering a choppy, sideways market You select the pair of currencies with which you wish to make a Forex deal. You determine the volume (the amount of the deal). You deposit…
Read article
Translate to English Show original Toggle Dropdown