Sentiment is usually backward looking and is incorrect so frequently that it is used by professionals as a counter indicator of market direction. Daniel Loeb
The Forex Exchange market is the worlds largest financial market with an estimate daily turnover of over $5T, which is more than 25 times bigger than the US equity market. Although the FX market to some extent seems to be irrational because they don't follow the interest rate differential as expected. This could indicate that investor psychology plays a significant role in exchange rates fluctuations and there are consistently empirical evidence which suggest that sentiment may be the key to understanding this apparent irrationality.
Each and every trader will always have an opinion about where the market should go, and everyone will have their own explanation as to why the market is doing what is doing. Sentiment may drive trades however sentiment does not always translate into actual trades, so at times it can be deceiving.
It is what people actually did in the stock market that counted - not what they said they where going to do" Jesse Livermore
[list][/list]… 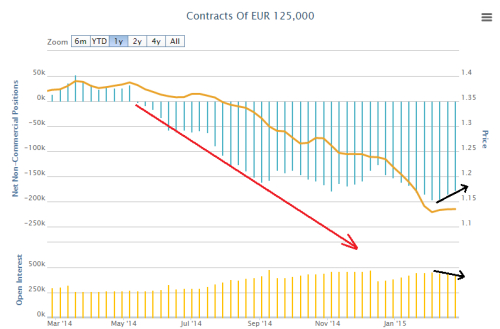 In the last years and in particular this year, the London FIX has been on the front page of mainstream media but not for the good reasons. Trials and allegations involving various big banks is under developing right now as they are accused of artificially fixing currency rates and rigging the FX market.
This growing scandal suggests that no matter how big is the size of the FX market the fact that the market is controlled by a small group of traders at a handful of large banks it makes the FX market prone to manipulations.
Lack of regulation is one of the other reason why FX wrongdoing is possible and what makes FX market the most opaque market of all financial markets.
Before going any further we must address some serious questions like: What is the fix?; Who uses the fix? How is the fix manipulated?; and the most important question is: How can we make money of the fix?
Although there is no doubt the London Fix has been manipulated, by answering the above questions and knowing the mechanism behind London Fix we can create a profitable strategy from a risk to reward stand point of view. It's like in Poker, if you have the possibility to know your opponent cards you know which cards… 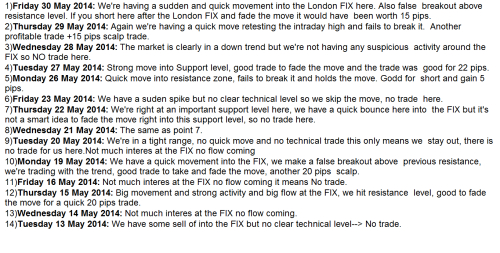 
This article is a continuation and a reproduce of my recent blog post series were I was trying to give my own view on the major currency pairs for this year but I never got the change to finish it, so I though it may be a good idea to write an article were to cover this subject. Keep in mind this is just my personal opinion and my own plan for this year, it may or may not work out, flexibility is key, because things can change very fist in today's market.
I'm going to give out my Fx Market Outlook for this year and I'm going to start with my favorite currency pair: Japanese Yen. I want to take the time to go through all the major currency pairs and give my personal outlook for 2014.
We know that currently the YEN pairs is all about Abenomics market policies. The "Abenomics effect" have had a huge impact to revive Japan's economy, strengthening consumer consumer spending. Although many have doubted the market policies of Japan's new Prime Minister Shinzo Abe are working very well: stock market is booming, real estate prices are rising, and retail sales are also rising. So far "Abenomics" has been a huge success, and this is very supportive for the current USD/JPY …

Dear Readers!April is long gone and it's time for me to show you more tips regarding my favorite topic - Usage of Pure Price Action (PPA). This time I will describe some connections and dependencies between fundamental and technical trading. I WILL NOT TRY TO PROVE that DOW theory cannot be applied in Forex market (that I will do in next article). Instead I will show you that sometimes technical and fundamental analysis go arm in arm and if you notice that on time, you just might profit from that.Once again I will explain the general idea using EURUSD and USDCHF case study so you have real image of how things work for me.EURUSD M15 TIME FRAME The chart above shows you some price action regarding downtrend that occurred on EURUSD in the middle of March. I will not pay too much attention on the trend lines themselves (you can take some time and see for yourselves what possible entry points you would pick), instead I will go right to the point which in this case is gray rectangle in the middle of the chart.This is how it looks zoomed:EURUSD M5 TIME FRAMEI put the data announcement on previous chart but for you to have better reference point I also put it here. Basically what you see i…