The EURUSD has been in an uptrend since July 2012. Recent monetary policy changes have triggered a sell off in the pair creating speculation that the uptrend has concluded, The reversal in progress, has the capacity to take the pair much lower, this article will shed some light on the catalyst required to drive the trend change, as well as a trade plan.
Fundamental Outlook
Disinflation remains a concern for the Eurozone. HICP is the measure of inflation used by the ECB. The most recent reading came in at 0.5%, while targets are to be as close to 2% without going over.
Figure 1.1 - HICP on steady decline after a high of 3% posted on September 2011
The ECB has several different tools for battling disinflation. In April, an attempt at verbal intervention was made. See my blog post from April 12 - Possible EURO sell off at Open for details. The results was a 20 pip gap down, followed up with a 2 day sell off taking the pair 90 pips lower. The method proved to be ineffective as buyers stepped in and did not allow the pair to close lower.
The ECB Press conference on May 8, however had a major impact when Draghi indicated a clear time frame for when action would be taken.
Figu… 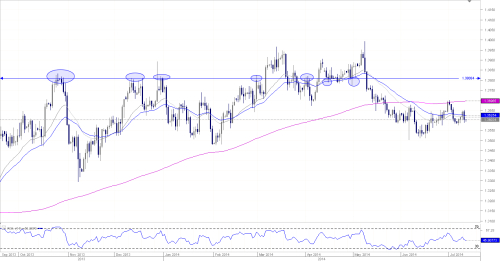