This question is not just about the participants in the FOREX market, but also the question of anyone interested in the vehicle. Every morning, you hear the words "oil prices rise, oil producing countries have reduced production." But how can we forecast the increase or decline in oil prices?
Oil, Gas, Gas, Plastic
Territory prejudice
[list][/list]…

Crude oil!...ahhh yes…that has been my world for a good many years!
Without that black sticky stuff, our industrial world would be very different and our world would arguably be a greener planet. Personally, I think burning coal to generate power is far worse than burning fossil fuel. Crude oil has been the single commodity responsible for the rise of the modern Arabs nation. And to think that the Saudis initially thought foreigners were crazy looking & drilling for that black stuff when, understandably so to the Arab’s, they should have been drilling and looking for much more precious water which is absolutely essential in a desert world.
In monetary value of the day, price per barrel of crude oil ranges from USD0.49 back in 1861 to USD117.09 in 2011. However, in terms of 2014 monetary value, crude oil was actually highest in 1864 at USD121.50 per barrel. Actual historical price per barrel of crude defers on various sites but generally are right around these figures.
Alright, that’s a very brief summary of crude oil prices! Now we go to what I think would be the direction of crude oil in our present & near future.
Why did oil lose so much value in so short a time period?
Person…
Read article
Translate to English Show original Toggle Dropdown


Introduction
The production of crude oil is paramount in order to sustain and develop the global energy industry. Despite the achievements of alternative forms such as solar, wind, and even shale, crude oil remains embedded with vital macro economic characteristics. One of these characteristics is the ability to determine and even benchmark prices in the wider energy industry, and the other is its direct correlation to inflation. Concerning the latter however, that relationship has become shaky since last decade. We have witnessed crude oil, in particular West Texas Intermediate, lose all forms of intrinsicity. This loss started since the last decade, but is slowing down.
History
From the 1940's up to early 1970, the price of oil enjoyed a peak relationship as relates to its intrinsic value. Volatility was nowhere as present as it is today (from 2008), as prices ran in the region of $12 to $14/bbl. In fact, crude was very fundamentally linked, and the result of the Iranian revolution and war between Iraq and Iran, saw prices shoot up to $35.00/bbl. The price increase also factored in a cut in general world production, which saw capacity down by 10%. As a consequence of increas… 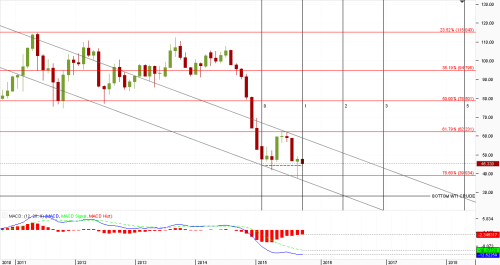 1.0 Introduction
Oil prices fell in August to the lowest level in six and a half years due to increased production and concern that the slowing economy of China, which is a very big energy consumer. US crude oil dropped to 37.7 dollars on 24. august, the lowest since the beginning 2009, when the world economy was hit by the financial crisis and recession.
Figure 1: Oil price bottom on 24. August 2015.
Economists around the world are struggling to assess what will be the effects on the global economy leave the current dizzying increase in the price of oil on the world market. The shocking rise in oil prices the past few decades was accompanied by rising inflation, the decline in employment and the recession. On the macroeconomic radar now no trace of these phenomena. This time it's not about reducing deliveries, but the unstoppable demand, despite the price. If the global economy is tottering and soon, it will be because of a collapse of the mortgage market, and not because of the turmoil in the oil market. Insatiable thirst of China, India and other third world economies on the rise for oil, the main reason why oil prices, expressed in the weakening US dollar, has not yet begun to…