Hello community members, fresh month fresh opportunities waiting for everyone in the time coming ahead. So, i am here with a new article which may enhance your trading ability and make you gain some nice profit this month. This may change the way you look at the market. As my title is very much clear, we are going to learn about "Breakouts and Fakeouts".
A breakout can occur when a specific price level is breached such as support and resistance levels, pivot points, Fibonacci levels etc. With breakout trades, the goal is to enter the market right when the price makes a breakout and then continue to ride the trade until volatility stay alive. If there is large price movement within a short amount of time then volatility would be considered high. On the other hand, if there is relatively little movement in a short period of time then volatility would be considered low.

How to Measure Volatility:
Volatility measures the overall price fluctuations over a certain period of time and this information can be used to detect potential breakouts. There are a few indicators that can help you gauge a pair’s current volatility.
#1 Moving Average:
Moving averages are probably the most common i… 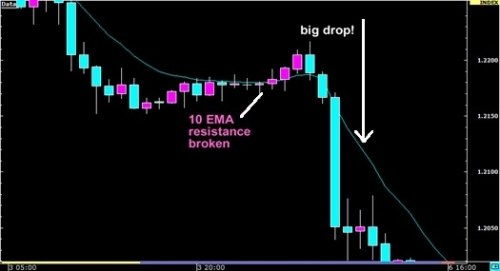 This article looks at :
+ what's happening from technical perspective only and my expectations for EUR/USD for the near term;
&
+ how range-box breakout (i.e. RBBO method) analysis / trading is applied.
Note: For further details on use of range-box, please refer to my previous article
(at https://www.dukascopy.com/fxcomm/fx-article-contest/?My-Technical-Perspective-On-A&action=read&id=3198).
An example of RBBO method could be seen at the later part of this article.
My view for EUR/USD :

The 3-months chart shows price breaking below the blue-dashed ray line and proceed to consolidate above it for the next 5 bars (since early March 2015) and counting.
Going forward, how price reacts after reaching either of the 2 blue-solid lines drawn on the 1-week chart would be critical.
At this point in time, price has been below the mid-Bollinger for more than 2 bars.
We are also seeing price trending downwards; making lower highs and lower lows.
Price should move towards the blue-solid-horizontal price level. But how price reacts after reaching the blue-dashed line would be critical as it has been a consistent road-block the past few times.

The financial markets continue to reflect the increasing uncertainties related to the Sovereign Debt Crisis in Europe and its ripple effects on the rest of the world. With the precarious nature of the fragile period of stability currently holding the markets together, a brief analysis that captures a worst case scenario and its effect on the currency market would be of tremendous interest to Forex traders. Many of the major currency pairs that were affected by the safe-haven flows during the 2008 Financial Crisis are now moving within similar Consolidation patterns that preceded the sharp breakouts 4 years ago. However, given the much larger size of these patterns today, a major market event that disrupts the fragile period of stability could lead to even stronger breakouts over a longer time period. This analysis will therefore take a look at the potential short-term and long-term effects on the EURO USD, AUD USD & GBP USD of such an event, using the theories behind Consolidation breakouts as the basis for the price forecasts. 2008 FINANCIAL CRISIS In 2008, safe-haven flows that sought the preservation of capital through the US Dollar and the Japanese Yen led to large and …

A small trade
was executed on the EURO CAD last week as part of the strong bearish breakout
from the Daily and Weekly Consolidations that had started the previous week.
This was done using the methodology outlined in my previous article which
involves using the 4 Hour and 30 Minute Charts for entries after the Daily
Chart has given a signal for the start of a trend.
DAILY CHART

WEEKLY CHART
With these strong
bearish signals indicating the start of a new breakout trend, the 4H Chart then
provided the first strong entry setup in the form of a Descending Pennant.

Eventually, the 1,2490 Support of this Pennant was broken by a 30 Minute Candle to indicate the start of the
breakout. With the Stop Loss placed above the high of a Counter Trend Line
(CTL) that was also broken, the trade was entered at 1.2480 with an initial
Limit set to the long-term target of 1.2000. 30 MINUTE CHART - ENTRYThis 1,2000 target was more enticing to
me than ´settling´ for the 100 pip target of 1.2380 which is part of my
strategy. However, I humbled my self and returned to my rules and decided to
exit early instead. By that time however, the market had pulled back slightly
above the 100-Pip area,…

The aggressive
short-term trading strategy explained in my last article was recently applied to
the EURO AUD last week when the Euro experienced significant losses against
other major currencies. The lukewarm response to the Spanish bond auction
renewed fears about the economic outlook for Europe
and its common currency, leading to declines against the USD, Aussie, Pound and
Canadian Dollar.

More trades such
as this are likely in the weeks ahead as the Euro loses more strength
against the majors. Although we might actually see a brief rally this week as
the pairs retrace in favour of the Euro, this is likely to be temporary ahead
of further declines towards the end of April.

On April 5th, the 4H Chart
had formed a Descending Pennant at a major downtrend line and broke an Inner
Uptrend Line to signal a strong possibility of a pullback. The other reasons to
have expected a decline were that

the pair was at the end of its average Weekly Range of 500 pips
it was also just below the Support of the Weekly
Chart’s Range which normally leads to a pullback
the Euro had already started to decline
significantly against other pairs earlier in the week.