The ADX index compared to MACD, RSI and Stochastic is less used indicator. Mostly long-term traders use it and mostly in stock trading. The ADX is used to measure and check quality of the trend. İt has very simple approach and display to use.
Keep in mind the indicator measures only strength but not directional of the trend. Trend and ADX may move in the same and opposite direction with the trend. In a strong downtrend, ADX will rise as it happens in strong uptrend. ADX will drop when trend weakens. We may say that ADX shows convergence in the beginning of strong uptrend and will show divergence when uptrend weakens. Vice versa, ADX will show divergence with strong downtrend and convergence at the end of the downtrend.
The levels of ADX shows quality of the trends. This allows us to choose the strongest trends to enter and ride it until it weakens.
To use ADX we will setup our chart like this:
To filter the trend strength, we look to ADX levels. Bes entrance will be above 25. If ADX climbs above 25 in uptrend we look for buy but option when ADX climbs 25 in downtrend we look for sell option.
ADX level expressions are:
We will setup our chart to trade with adx.
Timeframe: 4…

This article is a continuation of my day trading strategies, that I started covering in May. In May, I covered Day Scalper and showed live trading examples in the comments. Catch a Trend and Late Swinger are relatively simple to follow compared to Day scalper for they do not utilize Moving Average Envelopes or complex entry methods.
As I already stated in the Day Scalper article, day trading is not for everyone as it requires discipline and self-control especially near events that increase market volatility. There is no “holy grail” in forex trading and successful trading depends on consistency with a goal of more wins than losses.
Requirements
… 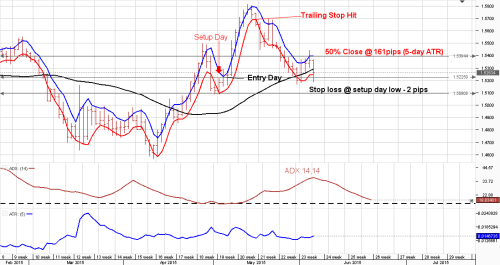 Many
traders use technical indicators to support their entry and exit decisions.  But not all indicators are appropriate for
all situations. Some indicators, such as the stochastic oscillator, are best
applied in situations where recent price has moved in a range. Other tools,
such as MACD or OsMA, are more accurately used when recent price has moved in a
trend.   How, then, do we know which tool
to use? Let me show you have to use ADX as the tie breaker.
ADX, or
Average Directional Index, measures the strength of a move.  Since it takes a certain amount of strength
to break support or resistance levels  - which mark the boundaries of a defined range - we can use ADX to
provide us with an indication of how likely the upcoming support or resistance
level is to hold and, consequently, whether we should use an oscillator (range)
or a momentum indicator (trend) to give us further confirmation that our entry
or exit decision is a high odds play.
When you
add ADX to a chart, it will show you three lines:  The main line (ADX), which is the one that we
are most concerned with; the Plus Directional Indicator (+DI) and the Minus
Directional Indicator (-DI).  These last
two DI lines provide d…


Introduction:
This article is all about the following chart, “Bar Series Frequency”
and its implications on trading and price action. For this discussion, “bar frequency”
is the number of times a bar closes up or down in a row. The following chart
was created using the last ten years of EURUSD daily closes at NY (5 PM EST) If
using different closing rates, this chart will exhibit the same structure
regardless of the closing time, time frame, or currency pair


The bottom axis represents the number of similar bars in a
series, either up or down. The vertical axis represents the number of times in
the last 10 years a series was seen. It is important to know, that a two bar
series is part of every three bar series, and four bar series etc. Calculating
the series count this way determines how many two bar series become three bar
series on so on.

Why Care
The first important statistic is that nearly 52% of all bars
exhibit no series tendencies at all. That means that over half of all bars are
followed by a bar that moves in the opposite direction, a down bar is followed
by an up bar, and vice versa. The 52% is actually rounded up from 51. 52% and
is insignificant when tested at the… 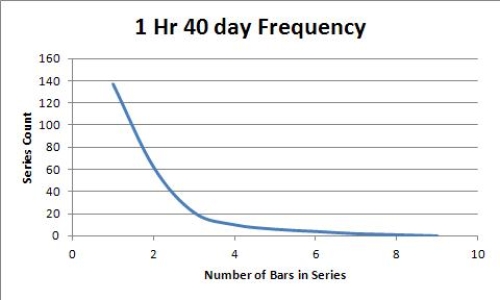 Many traders prefer to use a filter when momentum trading. But much of this is done under the incorrect notion that "the more complicated my system is, the more successful I will be at trading." This is far from the truth. I reiterate the principle of KISS: Keep It a Simple System.For example, traders using a MACD signal line crossover, or a MACD zero line / EMA crossover will frequently use an Average Directional Index indicator as a filter, in order to determine if a the strength of the trend is strong enough to enter in. Typically an ADX > 25 is the parameter used. While this may increase the win/loss ratio of your trades over time, it will not necessarily increase your profits.The X-factor that makes these filters actually less profitable is the strong opportunity cost that they impose on what is already a fully functional and profitable system. Let’s look at the most recent example of this, on EUR/USD on a 1h timeframe. Our buy signal is a MACD zero line crossover, which is equivalent to a 12-period EMA and 26-period EMA crossover. Normally, we would have entered into a trade at 0:00 GMT on Sept 30 for a price of 1.3585. The current price is 1.3246, which on 50:1 leverage is a…