4hour or daily chart in Price Action? Part 1As you probably know, each trader has to find harmony between his personality and his trading strategy. It is one of the most important steps on the road to become a stable profitable trader. Several months ago I have decided that Price Action is my method of making technical analysis. Sometimes there is a huge gap between decisions and our trading practice, but it is a topic for another day. EXAMPLE 1 Let's see the daily chart EURJPYIt is a bearish candle - 25 February 2013 What do we see? There is s strong bearish candle as breakdown. Strong engolfing, as we may say in PA's language. I suppose several thousand traders all around world opened short positions on this pair in 61,8% or 82% fibo and set stop loss behind this 25 February's candle. It doesn't matter if several PA's setups won't work on daily charts, of course, but let's ask another question. How we can use this big move to make money in the market?It is time to see 4 hours chart EURJPY during 25 February's session. The 4 hours chart show chance open short position with good relation between risk and profit.We see the false break setup, (i've written some information about t… 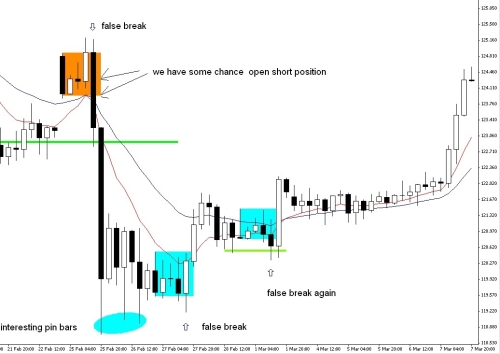 This next trade on
my real account involved shorting the EURO JPY that continued its downtrend
following the Daily Chart’s Bear Crown formation. This trade was in sync with
other bearish moves against the Euro as the currency continues to decline
amid a deteriorating economic outlook for the Euro zone. Although there is a
consensus that the risk on a trade in the Forex be no more than the 2%-5% range, my strategy
involves risking 15% on each trade because of the high probability of success
of these setups.

TRADE SETUP
The Daily Chart
below shows how the recent downtrend on the EURO JPY started with the Bear Crown/Head and
Shoulders pattern at the beginning of July. This was in sync and supported by
the strong bearish trend that was already in place on the Monthly Chart.
DAILY CHART-RECENT
BEAR SIGNAL

With the trend
direction already decided, it was then time to wait for an appropriate setup on
the 4H Chart that would allow us to take advantage of the downtrend. This came
in the form of a Pennant that was formed between the 97,25 and 96,33 price
points.
4 HOUR CHART-THE
SETUP
It was important
that this setup be strong enough to give the trade a hig…