Community
Article contest
Which Is Adouble Top
WHICH IS ADOUBLE TOP

For thistrading strategy is very desirable price action of the asset that will operate from 30 minute chart on.

During theperiod when the candles are formed in order to create a double top pattern can be detected in the candles the following information:
The thickpart is the "body of the candle." Sample prices when the candle opens and closes.
The mostdelicate parts are "slivers." They show the maximum and minimum price of the day.

The traderused the information from these chartists figures to determine when to buy or sell something as is giving the pattern. But in our case as we are studying the double top we prepare for a turnaround ie ticket sales look is suggesting after being given a double top pattern.


Now for thedetailed explanation of our pattern.A doubletop is formed when there are two peaks on a large resistance , with a distance between them indefinite at approximately the same level .Betweenthese two maxima price correction where candles are usually very small in size , with large tails, and whose minimum price point will be key when the confirmation of our double top pattern occurs . However, It is important that between the maximum and the correction there , at least , a distance of 15% of the price quote .


Then afterthe second maximum if another fall that broke previous levels of correction ( which occurred between the two maxima ) occurs, can be given by confirmed the formation of figure called flysheet. It happens thatAfterbreaking the turning point , the volume increase due to the increased supply of investors wishing to leave the value.The double soilclearly works as a formation shift in price quotes . From a second peak with a lower volume drop occurs, and then stop and increase the volume when the pattern breakage level 2 is completed . In thegraph we detail. 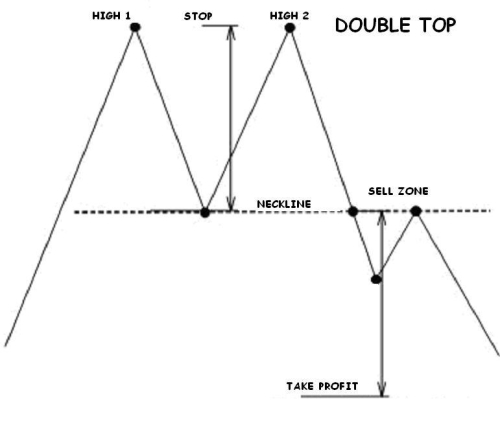 It is avery common pattern in high temporalities graphics from one day to several years, but will also run from 30 minute charts . The characteristics of this pattern can sometimes be similar to the SHS that it is necessary to seize distinguish.

Once theprice breaks through the neckline , you can enter the market with a sell order . The graphshows the neckline has been broken for the price - when this happens , you press the button and enter a sell short.

Sometimes ,the price may rise a bit on our second maximum but Lugo returns to levels of resistance, traders believe that the asset is going to go long and buy what makes a sudden drop occurs when taken out of market, and the double top pattern is completed. Youcan see this directly in a chart. Once an asset reaches a price that is too expensive, then the price begins to fall.

For makinga profit we hope once the price has fallen to the equivalent level between the two peaks and neckline, this distance will be that we should expect to get with this pattern.

And as alwaysdo not forget to properly managing your money, know how much money you are willing to risk. Moneymanagement protects you against the loss of all their own, after a series of losing trades.
Successfultraders only risk a small amount of your trading capital in a single operation, so if the trade does not go as expected, the risk is limited. As ageneral rule, you should only risk 1% of your trading capital in a single trade.


Now we go with some graphic examples.