Community
Article contest
What Happens during the Day… Every Day

In an earlier article I compared the length of trends on a daily time-scale between EURUSD and a randomized instrument only to find that the differences were marginal. The conclusion was that on a whole, trends on a daily time-scale don’t last rather than reverse. Using statistics ans data-mining, I look at intra-day trends and show that on certain hours of the day, prices tend to travel in trends while on others they tend to travel within a range.

Range throughout the day

The range per hour is the difference between the high and the low of the hourly period. 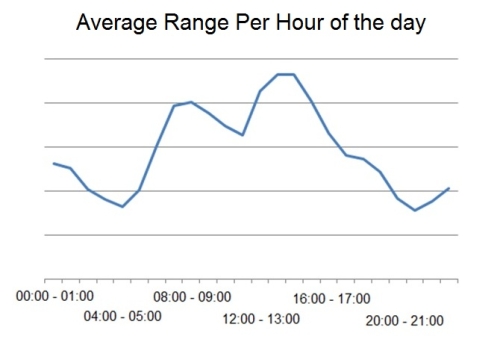 This graph shows the average range for each hour of the day for EURUSD over 2.5 years of data. three peaks of activity arise, one at around midnight, one at around 08h00 and one around 14h00. These correspond to the peaks from the Tokyo, London and New York markets respectively. There is thus a verry strong correlation between volume and range.

Intra-day trends cannot be analyzed with the classical definition that says a bullish trend ends when the price falls below the last bottom and a bearish trend ends when the price rises above the previous peak. It’s wrong to use this definition because the average range changes greatly during the day and it is thus much more probable for these trends to end at the hours when the range/volume is increasing. Inversely trends will end much less often when the range is decreasing and the chart has a higher probability of forming a flag-shape.

Range per volume throughout the day

In order to study EURUSD in intraday, we need a trends definition that is not affected by intra-day volume fluctuations. Since range is so much affected by volume, let’s take it out of the equation by dividing the range by the volume. The graph below shows the average range per volume for each hour of the day. 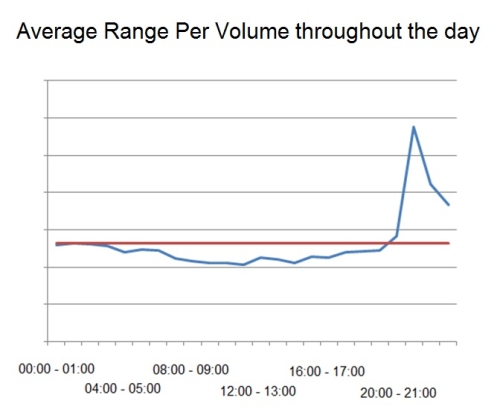 the range divided by the volume is a trend indicator in the sense that if for the same volume, one period has a much higher range than another, it must mean that within this period, the prices travelled in a trend rather than in a range.

the graph shows, the range, proportionally to volume, is actually smaller on average during the London and New York hours. It then reaches a peak in between the New York market and the Tokyo one, the range per volume almost doubles at this time. The red line indicates the overall average range per volume.

My interpretation is that the process is largely stochastic. At the times when there are fewer players with their own strategy on the market, there is a higher probability that a majority will agree with one another, even by pure chance. As the number of strategies rises, this probability falls towards zero and the proportion of buyers and sellers will mainly be the same causing the prices to be steadier, proportionally to volume. 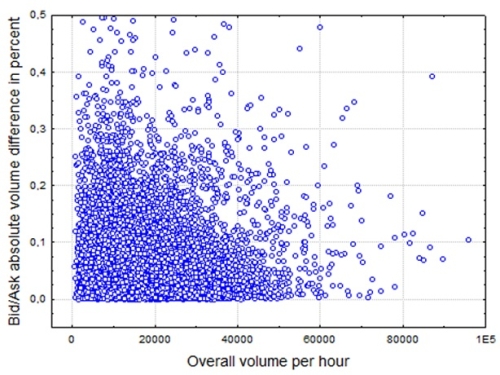 However, this does not explain the enormous peak of the range divided by volume just before tokyo market hours. 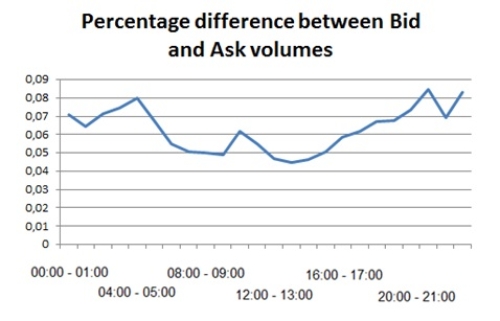 the graph to the left shows that certain hours, on average, have a much bigger bid-ask volume difference in percent. This is in agreement with the earlier statement that low volume means a higher disparity between bid and ask volume. However, if you compare this graph with the one of average range over volume throughout the day, you can see that the enormous peak at the beginning of Tokyo is missing.

While volumes between tokyo and london are just as small as between new york and Tokyo, the price variations are comparatively quite small. In order to achieve these enormous ranges proportionaly to volume, EURUSD must travel in trends between New York and Tokyo.

Are all days really the same?

We know that most days have large similarities between them in terms of volume and range per volume evolution throughout the day. However, a cluster analysis shows that days can further be separated into two groups or clusters.

On the 584 days available, Expectation-maximization (EM) clustering with 10-fold cross validation identifies two groups. The first group contains 88% of days while the second accounts for the rest. The second cluster has a much higher average range per volume. This goes to say that on certain days, about one in 8, prices move in trends much more strongly throughout the entire day but both groups show a strong peak in the early hours of the Tokyo market.

The results using K-means clustering is similar except the smaller group only accounts for 8% of all days.

The range per volume gives an indication of volatility that is not affected by volume fluctuations during the day. It shows that, in the interval between New York and Tokyo market hours the range proportionally to volume is much greater. This is partly due to a stochastic effect that causes a larger average difference in Bid/Ask volumes when the overall volume is small but it appears that the enormous peak of range per volume between New York and Tokyo hours cannot be explained that way. Instead, it seems the difference comes from longer lasting trends.

A major flaw of range per volume as an indicator is that it gives no indication of the actual range of the equity. Following trends between New York and Tokyo may be sensible but possible earnings are much smaller since the instrument actually moves very little at these times. One may always use a higher leverage but the problem may lie in the spread between the price you want and the price you actually get when volumes are so small.