Community
Article contest
What Ever Happened to the Carry Trade? (part 1)

What ever happened to the carry trade? Back in the middle of 2007 I was just a year into my trading "apprenticeship". I just had just blown my first account and was trying to find the perfect system that will make me a millionaire overnight.

I knew a friend who was just starting out in trading, lets call him Bob. "Bob" got into forex trading by hearing about the "Carry Trade".

What is the "Carry Trade" ?

The prime example for a so called "funding currency" for the past decade has been the Japanese Yen. The Bank of Japan has kept interest rates in the near zero range for close to 15 years now. See the chart below for this.

As can be seen on the chart, Japan's interest rates stayed in the 0%-0.5% range all throughout the past decade. Even to this day Japan has one of the lowest interest rates of the world ranging at 0%-0.10%.

My friend liked the GBP/JPY currency pair. Unlike today, the Pound had decent interest rates back in 2007. They were consistently higher then the other major currencies, reaching as high as 4-5% in those days. The chart below shows interest rates for the U.K.

The U.K. had high interest rates going back a decade prior to 2008. Back in 2006/2007 you could buy the GBP/JPY currency pair and profit of the interest rate differential between the Pound and the Yen. After accounting for the broker's cut in the Rollover Rate, you would gain around 3-4% per year by being long this pair in interest alone.

Those new to the carry trade may wonder why all the racket about a strategy that delivers 3-4% interest rates per annum? Well dear reader when you combine the base 3-4% interest rate differential with the massive leverage offered in Forex you truly get a monster.

With a leverage of "just" 10 to 1, the measly 4% turn into 40% per annum, just from the interest alone, even without reinvesting the interest payments. This is also without accounting for the appreciation of the Pound versus the Yen. Usually when a currency has a higher interest rate then its traded counterpart, it will tend to gain in value over time, all other things being equal of course.

The "Carry Trade" was in full swing, the media and Forex salesman were all over it, claiming it was the best and of course the safest investment out there.

The pitch went something like this: Why bother with your bank's low 3 or 4% interest rate when you can get over 40% using a "conservative" approach and over 100% per year using an aggressive strategy if you're more adventurous?

GBP/JPY Charts Filled The Walls of His Room

My friend loved to talk about the carry trade. He had past charts of GBP/JPY printed out and posted on the walls of his room, going all the way back to the year 2000.

He would show me the chart below and he would say to me: "The pair hasn't had a drawdown bigger then 20% in the past 6 years."

This Time It's Different, Markets Have Changed

He of course knew that, that's why all his charts were for the "good times" period after the year 2000. He would say: 1999? That's not even the same century, trading has changed so much since then, its useless to use that data to predict prices now.

That of course was true, Forex trading has changed a lot from the days of 1999, but my point was that he should consider the possibility of losses far exceeding his "conservative" forecasts.

After thinking it through for few days, Bob finally took the plunge and bought 3 mini lots or 30,000 worth of GBP/JPY when the pair was trading at 241.00. He had 10,000 in his account. While a 3:1 leverage may not seem like a lot to forex traders, keep in mind that the Carry Trade strategy requires no or very wide stop losses in order to work.

"Now it will take a move of over 4,000 pips to take me out, and by the time that happens the GBP/JPY will go up so more so I will have those pips as added protection" : Bob said.

My friend wasn't completely crazy, he did more work then most people would in his situation. In his mind, the fact that the Geppy hasn't had a drawdown bigger then 4,000 pips in 7 years was enough to put 10K on the line.

On 9 August 2007 BNP Paribas announced that it was ceasing activity in three hedge funds that specialized in United States mortgage debt. BNP's press release said that the complete evaporation of liquidity in the mortgage market made it impossible for them to calculate the NAV (Net Asset Value) of the funds. This news came just 2 weeks after the liquidation of 2 of Bear Stearns' hedge funds.

With banks holding trillions of dollars worth of mortgages, no one knew which bank was safe and which bank was saddled with bad mortgages. Markets seized up and interbank lending rates shoot up as mistrust started to spread. The TED Spread (which measures the difference between interest rates on interbank loans and short-term U.S. government debt) shoot up as banks didn't want to lend to each other. 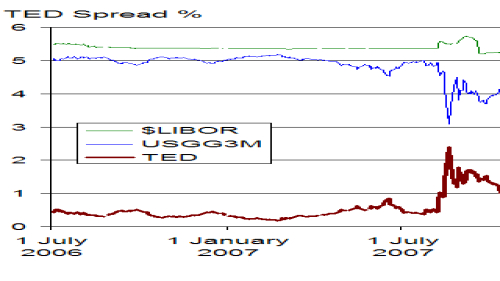 The TED Spread, a measure of market stress, shoots up above 2% in August of 2007 after staying below 0.5% for much of the past year.

Risk assets crashed, stock markets around the world fell and the safe haven currencies, the Dollar and the Yen gained in value. My friend was in trouble. By August 17 2007, the GBP/JPY had fallen over 2,000 pips from where Bob bought the pair. He called me that night and I couldn't believe the first words that came out of his mouth. "Geppy looking like a great buy right now? Just look at that pin bar!"