In my previous publications I concentrated on strategies to be used in strategy contest development. As presently developed strategy needs further testing and it consumes a lot of time I decided to describe possibilities how visual jforex could be used to implement trading ideas and to use it in demo account.

Strategy which building will be described in further sections of article is dedicated for catching of small movements inside tight range. Time when strategy to be used could be chosen so that no big movements in selected pair during selected period of time could be predicted. It could be for example be loaded during Asia trading session when most pairs with exception of those with JPY's do not move very intensively.
Thus strategy which will be developed parameters to be as follow:
- Pair - EUR/USD;
- Maximum number of simultaneously opened trades - 3;
- Opening of trade based on 10 min candles if last tick is 1 or more pips higher than candle open - sell trade is executed, if 1 or more pips lower - buy trade I executed. This rule applies if there is no open positions at the moment. If there is one open position additional requirement for opening trade is that existing position loss is higher than 3 pips. If there is two open positions additional requirement is that existing positions cumulative loss is higher than 9 pips;
- SL is 12 pips, TP is 3 pips;
- Trade amount - 0.001.

So strategy specification is done and now it is time for strategy development. Firstly in visual jforex default parameter should be set to values according to prepared specification, i.e. SL - 12 pips, TP - 3 pips. Trade amount - 0.001 and pair - EUR/USD is set by default so in this case no adjustments of default parameters are needed.

Secondly we need to choose strategy start point OnTick and follow with blocks and its interconnection. 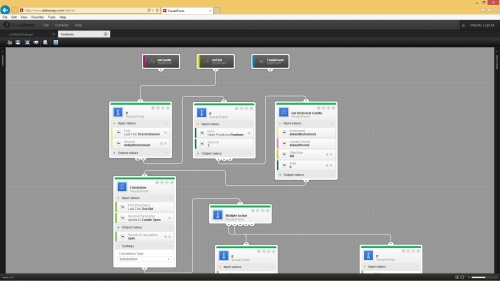 As can be seen from picture above strategy start point onTick is connected with block "If" in which check is done if tick instrument is equal to default instrument. Here only default instrument ticks are filtered. Next block "If" checks if number of open positions is less than 3 as in strategy specification there is a limitation of 3 simultaneously opened positions. Further "Get Historical Candle" block is used for fetching of present 10 min candle which open value will be used further for decisions on opening of trade (default period is 10 min if another period to be used either default period could be adjusted or new value jus entered in block parameter field).

Next "Calculation" block is used for determining how high or how low present rate is from present 10 min candle open. Thus parameters in this field are last tick value and present 10 min candle open value. In lower part of this block subtraction should be chosen in order to indicate what mathematical action should be performed with mentioned values.

Now we have value "span" (result of calculation) which will be used for determining to open position or not and if open in which direction. 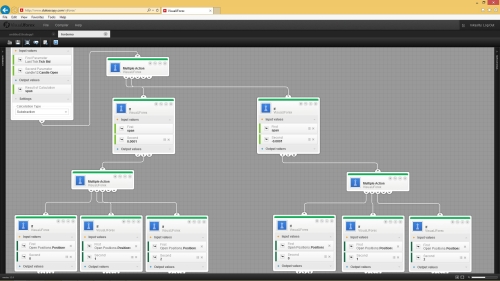 Analysis is identical in both branches thus only one branch will be described. 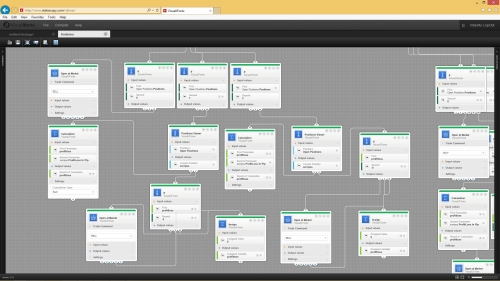 If there is 2 open positions logic goes similar but in this case first output of "Position Viewer" block will be triggered two times and "Calculation" block will be used 2 times also thus value of variable profitloss will represent cumulative profit loss of 2 open positions. Later on according to specification check if loss is higher than 9 pips will be made and if it the case third position will be open.

As was already mentioned another branch (which looks for opening of buy trade) has the same logic. Strategy could be amended by additional blocks which will allow strategy running for example during night time from 00:00 to 07:00 GMT for this purpose "GetTimeUnit" block could be used and later on further "If" blocks in order to implement time window when strategy should run. 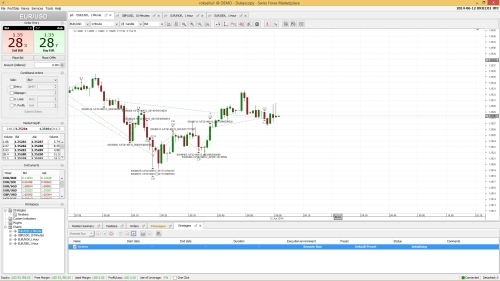 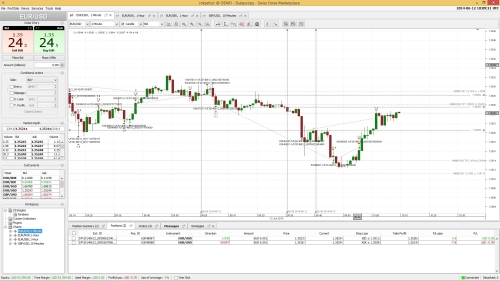 Trades are opened when rate goes more 1 pip away from 10 min candle open and check of cumulative profit loss is also made before opening second or third trades.

Strategy performs according to specification but the most tricky moment is actually define time windows when rate fluctuates without sharp moves as strategy is not dedicated to run during sharp moves. Already mentioned possibility is simple time window during night time but there should be also other possibilities to run and stop strategy based on various indicators, price action, etc.
But purpose of this article was to demonstrate how easy with means of visual jforex trading strategies could be developed. Definition of windows when to run strategy is not in scope of this article and will be covered in coming publications.
Translate to English Show original Toggle Dropdown