Community
Article contest
Us Dollar Index
Hello,my dear friends.
We will take in this article about:
US Dollar Index .
Any market in the world is sold and purchased in which it is necessary to lead the distinctive goods that this market is hungry and strongly influenced.
In the world of money the dollar is the king is dominant because of many factors are not our subject here.
We are talking about one of the most important indicators in the world of finance,
US Dollar Index.
The dollar was established in 1973 with a value of 100 points
So if its value is greater than 100 points, it is higher than the opening day and less than 100 points less than the opening day.
When analysts talk about the rise or fall of the dollar, they point to the dollar index. This indicator is an important analytical tool for traders in almost all markets.

What does it consist of?
The US dollar index consists of six foreign currencies, namely:
Euro- (EUR).
Yen- (JPY).
British pound- (GBP).
Canadian Dollar- (CAD).
Swedish Krona- (SEK).
Swiss Franc- (CHF).
The index compares the US dollar against a basket of other global currencies. This basket represents the majority of the world's largest floating currencies on a weighted average basis.
Some currencies in the index are the Euro, the Japanese Yen, the British Pound, the Canadian Dollar, the Swedish Krone and the Swiss Franc. Each of these currencies has a weight within the scale, with the biggest weight being the euro.
Call to think about the importance of the US dollar
If it consists of 6 currencies, how many countries are listed in that index?
If the answer is "6" the answer is wrong and if the answer is "24" then you are right!
There are a total of 19 EU member countries that officially deal with the euro plus the other five (Japan, Britain, Canada, Sweden, and Switzerland) with competitive currencies.
It is clear that 24 countries are a small part of the world but many other currencies follow the USD closely. That is why the US dollar index is of global strength.

Now you know the basket of currencies dealt with the dollar Index Index Let us now know what is the average circulation of these currencies against the dollar because they are not the same size and it is fair to give each of them size according to the volume of trading on it.

See the sizes in the following figure: 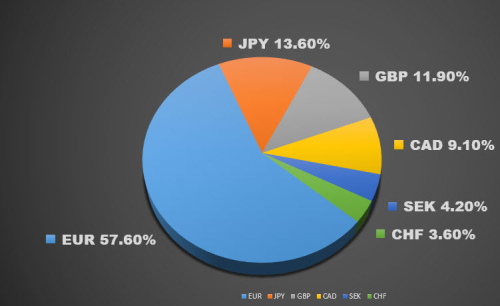 As you can see, the euro constitutes the bulk of the index of the dollar and the other five countries constitute less than 43 percent.
Here is something worthwhile: when the euro falls, the US dollar can only move.

Here is the chart for the US dollar index

But what does it matter to me as a currency trader?
Benefited from the following:
1 - Benefited from buying and selling as an independent work in relation to his work.
In the sense of its low price go to the bank and buy it
His price has become high and he has significant resistance to sell it and benefit from the price difference.

3 - It is known that there are many other indicators such as:
EUR Index.

As in shapes
We analyze all the indicators in order to discover any work in front of the dollar that can benefit from its great movement.
Example: We analyzed the currency indicators and showed a bigger than expected decline for the Sterling as a business, ie, when the support is large after a major drop.
And the Dollar Index when a big resistance.
Here 's the best deal with
GBP / USD.

4 - I watch the oil traded with the same style of trading with gold as well as goods in general.

Before I finished the article, I looked at the information very very important
Namely the JPY Index.
It is common for any movement to be offset by a rise in value on the chart.
JPY Index reverse.
Any rally on the chart is offset by a drop in value.
Any drop on the chart is offset by a rally in value.
Meaning
USD / JPY
If the Dollar Index rises in value, the USD / JPY will rise in value ((a close relationship)).
And if the Yen Index rose.
Given that it is the second currency against the dollar, it is normal that USD / JPY is going down.
In contrast to all, the USD / JPY will rise.
This observation is to be used by those who want to deal with the JPY Index as an analysis and to benefit from the study of its movement.
In conclusion, I wish everyone success.
Translate to English Show original Toggle Dropdown