Community
Article contest
Trading the Levels Correctly
In this article I want to show you how to pick the right price levels and how to trade from them. Most importantly I will show you how to implement this in the context of the price manipulation.
1.What is a price level.

First of all we need to understand what it is.
In my opinion it is something more than just a level where price changes direction. I think of it as a point where beliefs of a trader get manipulated. Those levels are constructed by big players such as market makers and institutional traders to trick others into placing orders that would be favorable for them.
When such an activity can be observed it can help us in predicting the potential price movements with a higher likelihood. If there would be no price levels there would be no point of interest and therefore no orders placed by traders.

Only two types of price levels exist.
These are horizontal and diagonal levels or better known as trend lines. There is one huge difference between them.
Horizontal price level can only be at a fixed price, and is not subject to change.
However diagonal trend lines don't have that fixed price, it can always change depending on the time of a touch. It means one more variable in the equation which makes it a bit harder. Also there are too many ways to draw the trend lines. Most of them incorrect.There is however a way to trade using trend lines, but at first we have to look at the horizontal levels to understand the concept.

There are only 3 things that can happen with a level:

As Forex is a range market we should concentrate on fake breakouts more than any other methods.
Fake outs are my favorite and definitely have a higher probability than other two.
I never trade breakouts. Ever.

To implement any type of these 3 you need to be able to select the price levels correctly. This is exactly what I am going to show you.
I will concentrate on horizontal levels, but I will also show you an example of how diagonal trend lines can be used.
There are too many possible levels to trade from at any given time, but how to know the right ones.
This is how - look for the following:

2.1. One or more fake breakouts of a level ( each of them increases the strength of the level ) 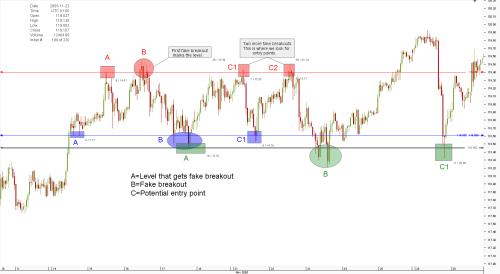 Here the key is to understand: in relation to what level the breakout occurred.
I have explained in the chart above how A is a level that is broken, B is an actual fake breakout that marks the level and Cn ( C1, C2, C3) is a next fake breakout which is also a point of entry.
There will be the situations when different levels will get fake breakouts one after another as illustrated in the chart above with blue and green support levels.
Then most recent level tend to be the strongest one. Only once we see that the breakout is fake we can look for the right level.

2.2.The amount of times the level has been touched( the more the stronger the level is ) 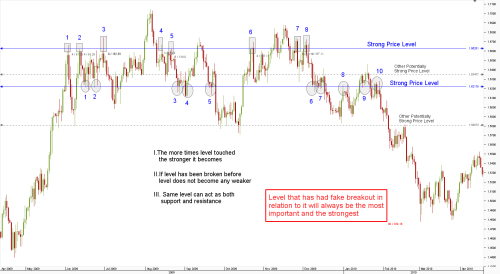 This is a bit harder than with fake breakouts, but provides a great overview of the strongest levels.
It is not a coincidence that price stops and changes direction at same levels all the time.
Drawback of this in my opinion is that you need more than 2 points to establish the level. If a certain level didn't hold at some point it doesn't make it any weaker. If you notice fake breakouts and also levels that are touched several times, and don't know which is the right one definitely go for the first option.

2.3.Presence of round numbers ( also increases the strength of a level)

Always look out for round numbers. These will make it easier for you to pinpoint the entry.
In the chart above you can see how price breaks pass two highs ( green rectangles ) and 1.1500 ( thick red line ).
Normally the both highs would be marked as potential resistance levels, but as the round number 1.1500 is there then it is something that has to be taken into consideration.
You can also notice how differently the price is acting when touching just the level (yellow ellipse ) or level in conjunction with the round number ( red ellipse ).

3.Quick look at a bounce or a retest.

It will always be seen as a mirror level. The old resistance becomes new support. The most important is that you know the right level. 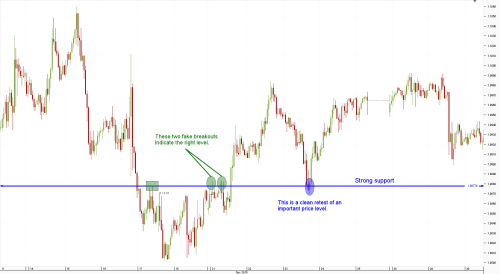 4.Only way to trade breakout.

To trade a breakout we need a strong level at first. Once this has been established next step is to get a fake breakout to the opposite direction. The best breakouts occur when this kind of accumulation has not touched the level, but is just hovering slightly above it. 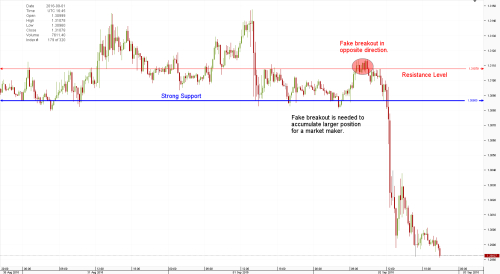 Now that the concept of trading fake breakouts is clear we can implement the same in trading from the trend lines.
We need two points to draw a line and a fake breakout through it. In this situation the same thing happens, but instead of a horizontal level a diagonal level is getting marked.
Only on the 4th touch we can look for an entry. Similar yet different from horizontal levels. 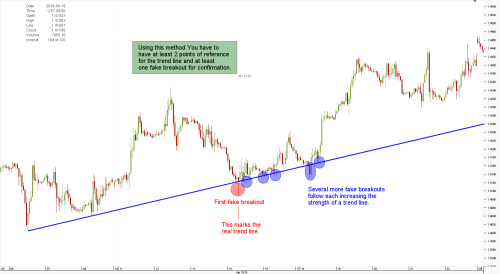 It is very important to see what is happening on the larger scale. We have to be able to see what market makers are doing and expect the next move.

Here is the little guide that will help you to understand what is most likely to happen next once certain things start to appear.
These two events always have to occur subsequently.
Below it is explained as follows: event + event = most likely direction of the price.
Support and Resistance below means: fake breakout in relation to either strong support or resistance.
For someone to buy, someone has to sell and vice versa. Market makers job is to create an opposite belief.
What does the market maker do? It literally makes the market.

7.The entry and the example.

In the example below I have used daily time frame as my main and 4 hour as my entry chart.
First of all we find the levels on larger time frame. Always one time frame for larger picture and one for execution. 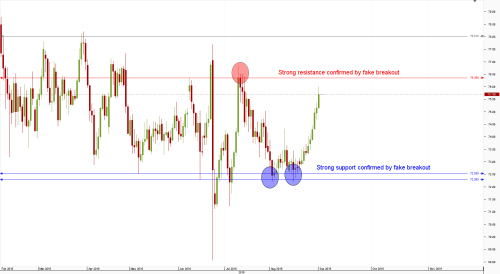 Then look for an entry on lower time frame. I use very simple rules.
There has to be a bar that touches the level, and then for sell signal I would use a close below the resistance level and for buy signal a close above the support level. Simple as that.
I would place limit order as close as possible to the actual level, depending how far the previous bar closed. The stop is placed above the high ( sell scenario ). Only enter if risk to reward potential is 1 to 5 or more. 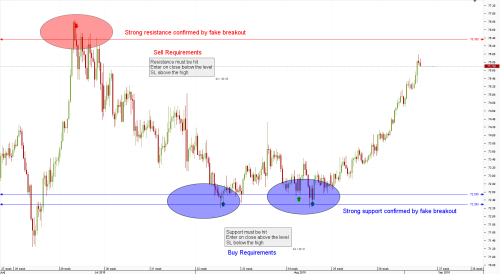 In this chart below you will see details of how those trades look in reality. You may not always get as lucky though.
This is just to show you the potential of the movements from these levels.
Another practice would be to look for a manipulation in the same direction just on a smaller time frame. This should also be very close to the actual level. 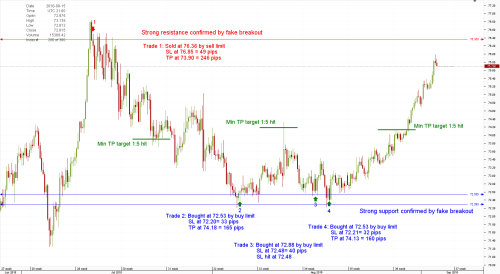 The more important is the actual fact of a fake breakout than the exact price.
If I had to choose only one method I could ever use, it would be fake breakouts. Most definitely.
Translate to English Show original Toggle Dropdown