What we Europeans call overnight session (starting with Wellington, Tokyo and finishing right before European bank working hours at 8:00 CET) might not be necessarily involve dark period of the day in other parts of the world. But it has a broader meaning. Whit all main economic events and most volatile market hours throughout the European and North American session - Australia’s, Asia’s and Middle East sessions seems more like an ending act of the period when everything calms down, sort of - night period in the natures cycle.

Still, despite the fact where in the world you live – this interesting part of a trading day may be traded while absent from the trading platform. It has repeating behavior aspects in low volatility environment – a perfect recipe for trading with limit orders.

Interestingly enough I never looked in to overnight session purposely for trading opportunities. But somehow very naturally, this trading method developed itself. As a trader you just can’t miss those trading opportunities that appear over and over again at the end of the every day.

The thing is that after fresh European and North American range is formed - all the technical levels are still “hot”, which means that retest of these levels during Asian session may end in similar fashion as it did in European session.

Having in mind low overnight volatility – it becomes easy to predict potential boundaries of the upcoming range and possible reactions to all key levels within this range. Generally this trading approach is best suited for EUR/USD. Those currencies which represent eastern part of the globe, like AUD, JPY, NZD can produce some unexpected movements naturally. Correlations with their national stock markets and unexpected local economical events or comments from government officials are quite frequent thing to happen. These still can be traded with limit orders but it requires extra attention individually as all of them have slightly different behavior aspects.

Pre-determining Tokyo opening level. There is a gap of three to four hours (depending on daylight saving regime) in between NY closing and Tokyo session opening – slowest period of the day. If you live in Europe, Africa or in Middle East it means that Tokyo opens really late - after the midnight local time, so it’s not comfortable to wait that long. But there is a way to pre-determine most probable areas for Tokyo opening. Look where in a 40 pip range (20 pip up and 20 pip down) from NY closing level it could get open and still be within same distance (20 pip) form highs/lows and approximately 40 to 60 pip from next notable tech level outside the range. It may sound artificial but price really moves in 20 pip impulses. More about this price action pattern here (See figure 1.0).
20 pips sequences act stronger if they coincide with standard mathematical proportions of the range. For example if daily range is 80 pips, then 20 pip steps would mark quarters of the range, if 60 pips then – thirds, and etc. 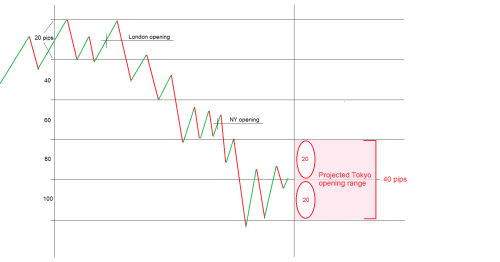 Staying within the range. If European and North American session (further in article – “Western” session) volatility created a decent range (close to the average daily range or more) and Tokyo opens near the middle of that range - outer boundaries of Western range are in play. In this case entry orders are placed at the limits of the Western range or near other most important technical levels if they got tested and rejected already (See figures 2.0 and 2.1).

It is not advisable to place tight stop loss limits when trading within the range. Even if your trade gets underwater for a few hours – there is very good chance that it gets retraced/bounced in the morning right before or right after London opening. You probably heard term “Frankie fake” – that’s quite common behavioral phenomena, when increasing pre-London European volumes trying to establish fresh daily starting range – often rechecking recent lows/highs or just diving inside Asian range. 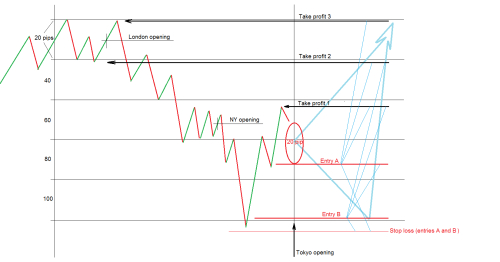 Figure 2.0. In this example after a bearish day, bounce from the lows was quite strong – made micro higher high, so long side is favored, but more distant levels for short entries also are tradable. First profit target is always within 20 pips from entry level as most of the times overnight movements doesn’t exceed 40 pip. If there is London opening level, or any notable PA level, which acted as support/resistance in the way – partial profits should also be taken before that level. 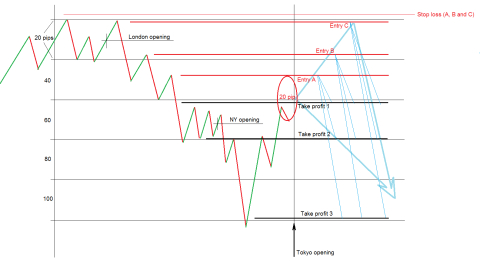 Figure 2.1. Both sides of the range can be traded – short and long. Often overnight sessions ends where it started while testing highs and lows in the process. 20 pip distance is for a reference and can’t be traded solely. It is necessary to have supportive price action level in that range to have exact point for limit order.

Breaking out the range. If Tokyo opening level appears near lows or highs (40 pips or less) of western range, and overall Asia range happens to be volatile enough – it is very likely that price will reach for a new highs/lows. Most often after new highs/lows are made, price retreats back inside western range – creates so called fake spike. Playing “fake” breakout is the most common and easiest trading scenario. It’s a good chance that limit order just 20 pips beyond recent highs/lows can be triggered right before reversal (See figure 3.0).

If Western range is narrow and/or it signaled strong trend for continuation but just didn’t proceeded (it often stalls right before NY session, and NY session hesitates also, as it often just dives back in to European range to retest all the broken levels, it is highly probable that Asians will try to breakout. In such situation entry orders should be placed just above (10-20 pips) potential Tokyo opening level in the downtrend or below in the uptrend (See Figure 3.1). Also in well trending environment, entry orders can be placed right near/at last lower high (in a downtrend) or higher low (in an uptrend). 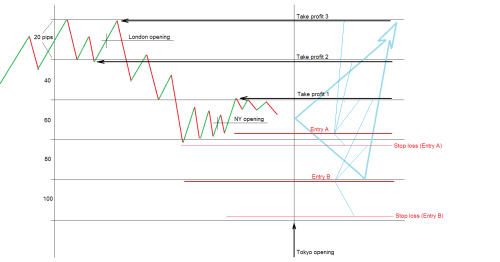 Figure 3.0. Limit orders outside of the intraday range must be placed at technical levels from bigger time frames. Usually middles of the range, weekly and monthly closing levels are strong enough to hold overnight tests. 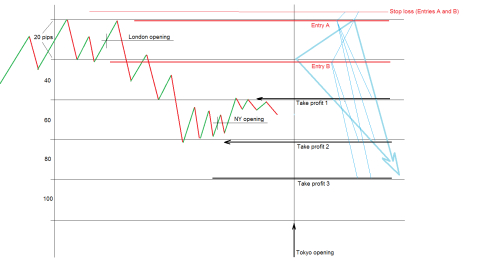 Figure 3.1. Best entries and exits are at notable price action levels which coincide with 20 pip segments of the range. 20 pip distance is for a reference and can’t be traded solely. It is necessary to have supportive price action level in that range to have exact point for limit order.

Count on new high to be made. If NY closes within reasonable distance from new highs/lows (20-40 pips) you can search for tech levels in a range of 20/40 pips beyond daily highs (combined it shouldn’t be more than 60 pips from Tokyo opening level or these won’t be reached)

Trading the news. I wouldn’t leave any limit orders if there is a Central bank statement release, but any other economical news could serve perfectly for some more distinct levels to be tested. Of course it would be better to stay out if there is really important news/data release scheduled or if there is a good chance that the actual data could be unexpected (Chinese data releases often don’t mach analyst’s predictions). But actually it could help to catch some fine entries. The initial impulse could help to breakout previous day range and test some key level near by. Anyway – Japan/Australia news rarely have a huge initial impact on pairs that don’t include JPY or AUD. But it could increase volatility for other majors in a positive (tradable) way.

Risk and money management: It’s important to split profit taking orders for different targets. The more distinct entry level is - better chance to get a bigger profit. Entries should be done with multiple orders and close some of them right away – to reduce risk by reducing exposure and booking little profit in order to cover loss if price will turn back and break the level (it often rejects level on the first attempt and breaks it on the second).

Most of the times your orders won’t get triggered because of narrow Tokyo developments but it’s ok. Don’t get greedy and don’t get soft with your entries – keep maintaining “respectable” distances from Tokyo opening level (projected or factual) and within outer boundaries of the previous Western range. All it takes – just additional half or hour of analysis later in the evening (when markets doesn’t move much anyway) and you can wake up rewarded with some green trades going!
Translate to English Show original Toggle Dropdown