A break-out strategy as the name implies is a strategy that relies on market price breaking out of a recent range area and making a new high or a new low. A break-out trader is looking for situations where volatility is reduced and the market price has formed a narrow trading channel or range; the aim of this search is to establish a position as soon as the market price leaves this range. Such a trader would be buying if price breaks out of the range in the upward direction and selling, if the break-out occurs in the downward direction.


A range is usually bound at the top by a resistance level, and below by a support level.
An example of a range or channel can be seen below. 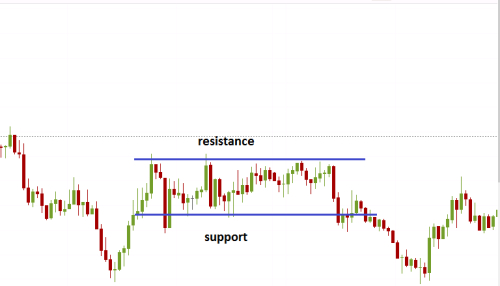 So from the above screenshot, we would be looking to sell once the support level is broken. 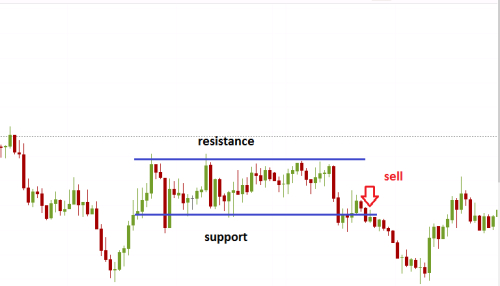 The hardest part about trading break-outs is recognizing the range or channel, because what one trader might call a channel may not be a channel to another trader. So it is important to have clearly defined rules for identifying a trading channel or range.

The longer price stays in a channel, the higher the probability of success when it breaks out of the channel, so the best channels or ranges are those that have held market price for a long time.

Fortunately, there are several tools available on our trading platform that can help with the easy identification of a trading channel. Some of the commonly used indicators for spotting a trading channel are: Contraction occurs when the upper and lower bands start to come close together; this usually signifies a drop in volatility and indicates that the market has formed a channel or is in a range. Most traders often refer to this concept as a "squeeze" or a tightening of the Bollinger bands.

Once we notice the tightening of the Bollinger bands, the next step is to wait for price to level either the upper or lower band. In this case, it went below the lower band, indicating a break-out of price in the downward direction. 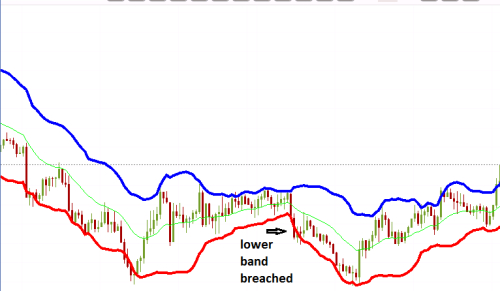 The above example is a textbook example of a break-out trade. 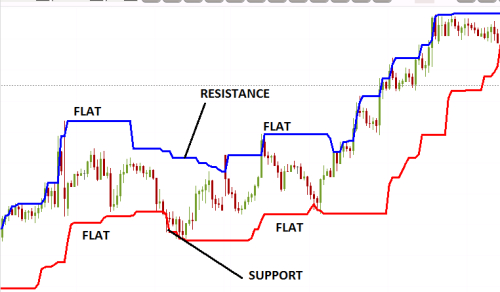 When using a Donchian channel, a break-out trader is watching out for the channel to go flat to easily identify a range or channel. A break-out occurs when the Donchian channel lines start trending either upwards or downwards, breaking out of the already established channel. 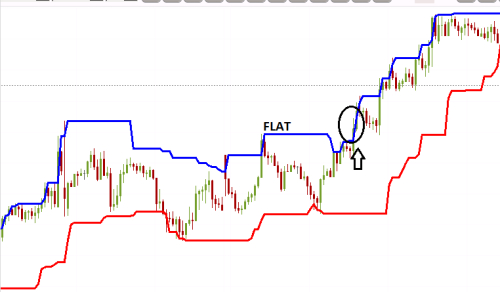 The example above shows the channel lines trending upwards, and breaking out of an existing channel. Break-outs are more effective when applied to higher time frames; a break-out on a daily market chart would net significantly more pips than a break-out on a fifteen minute market chart.

The biggest advantage of trading break-outs is the fact that a trader will be trading in the direction of the trend. Most market break-outs usually mark the beginning of a new trend or a trend continuation after a period of market consolidation; so trading in the break-out direction effectively means trading with the trend.

There is also a lot of comfort in knowing that some great experienced traders also trade using market break-outs. The famous Turtle trading system of Richard Dennis, was based entirely on market break-outs. The system used moving averages, and the turtle traders took long positions when the market price broke out of a range and made a new high.

The major issue with break-out trading is the concept popularly known as false break-outs. Not every market break-out ends in a profit; many price channel breaks will correct back to the breakout point, or beyond.

A break-out is only successful when the market break-out is backed by enough momentum to carry above a resistance level, or below a support level. 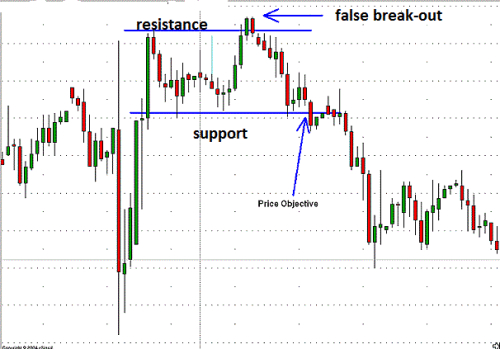 Another spoiler is the fact that the great turtle traders had few successful trades, and many losses. But their winners were large enough to upset their losses, so they always came out in the green. Their secret was that after a break-out, they let their trades run with the trend for as long as possible, and as the trend developed they added more trades in the direction of the trend.

I hope this article has been enjoyable and educative. I gladly welcome comments and observations.
Translate to English Show original Toggle Dropdown