Community
Article contest
Trade Optimization Using Visual J Forex
All of us get opportunities in the market where we feel we can profit quite a lot of pips. Though the opportunities for large profit come far and few it keep coming nonetheless . All we how to do is have a trade setup which can identify this opportunities and bring home the profit. From my personal experience in trading I realized each currency pair gives at least 3 to 4 trades a month where there is a probability of price moving in our direction for at least a percentage point. Now this opportunity can come at point in time either in day or at the middle of night. It shouldn't happen that we miss out on such opportunities simply because we were not looking at charts or say we were in deep sleep.

To take care of this and many other limitations of manual trading Dukascopy has provided us Visual J Forex platform using which we can automate our trade setups and then run them on either our own private server or on Dukascopy Remote servers. So I am thankful to Dukascopy for giving me the peace of mind while my money in the bank keeps increasing on it's own.

Lets now look at how it's done.

First of all you need a trade set up which is consistently profitable over a long period of time. I kept experimenting through trial and error till I have got a trade set up using MinMax indicator which has been doing phenomenally good, bringing me returns of over 600% on the initial margin used over last six months even though it executes far few a trades for most people's liking. It won't even qualify for strategy contest simply because it won't even be able to do 10 trades against the minimum requirement of 20 trades in the given month.

In the month of March 2017 it did four trades bringing in decent profit. In the test results that I have provided the trade settings are as below
Trade Indicator = MinMax with Candle period of four hours.
Trade amount = 3 million (30% of total funds)
Take Profit = 60 pips
Stop Loss = 60 pips
Test Duration = 1st March 2017 to 31st March 2017. As we can see with the profit loss ratio of 1:1 the algorithm has generated more than 30% returns on the initial capital and more than 100% returns on the margin allotted. For any algorithm this results are quite good but as we can see the trade optimization can be done while providing more flexibility to the algorithm to react to the market dynamics in a more non linear fashion. Here the tools that Dukascopy Visual J Forex platform has provided come handy.

So lets get started with the trade optimization set up.

When we enter into any trade we only have a probabilistic likelihood of trade going right to the extent we want. As we raise our target price the probability starts to get even lower simply because market is a no slave; any new development can cause the price of the underlying instrument to move in opposite direction. So once we have entered into any trade we need to keep a close watch on it to guard against any adverse development. Here we can hand over this tedious job to optimization set up which will track the price movement with each tick.

For trade optimization I have used two variables namely
1) Barrier and
2) Trailing Step.

Once the trade is executed the setup will keep a watch on current position. It has been designed to act in two different ways for each of the two trade possibilities that is whether the trade is long or trade is short. In the current algorithm I have defined the Trailing Step equals to 50 pips. For example if a buy trade is opened in EUR/USD at 1.050 and the trailing step will come into force as soon as price crosses above 1.055. For each pip move above the 1.055 the SL will be moved 1 pip higher from open price. 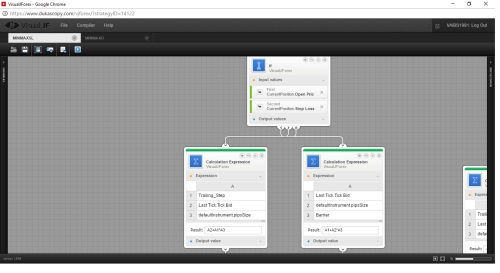 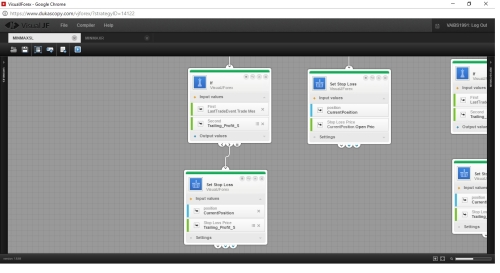 As we can see the difference in profit is remarkable. We have been able to successfully raise our price target while opening up the option of closing the trade if the price moves significantly in opposite direction. Even with the same trading algorithm the profit has more than doubled by use of trade optimization set up. 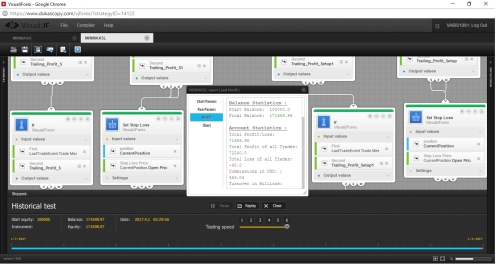 If any of you want to use the above trade otimization setup it is available with a different algorithm on my Strategy contest page of last month.
https://www.dukascopy.com/strategycontest/?action=blog&trader=VAIBS1991&month=201703
Happy Trading to all.
Translate to English Show original Toggle Dropdown