Good Morning, fellow traders, I continue my series about Volume Spread Analysis and how to use VSA to profit from the market. I’ve been talking to a lot of traders and there’re a huge number of methods out there, they told me the system could be profitable in months but the opposite equation also holds true for months. Even though the hit rate is higher than the miss rate, they are all continuing to seek for is a consistent system/method which is profitable month after month. I told them to study and use VSA as another trading tool to their trading arsenal and a lot of them question the reliability of tick volume.

Last week, I’ve been hit by a few questions via PM asking about the reliability of volume in Forex market. I’m totally aware of the argument since it has been the most asked question whenever I’m talking about VSA. As we all know, Foreign Exchange is a decentralized market, which’s operated 24/7 all over the world, so it’s almost impossible to draw a complete number about total bid/ask being made or total volume being exchanged every day.

Now, let’s ask a simple question: Who’s moving the market? The retail traders, the hedge fund, the government or Mr. George Soros…? I say: the ones with a lot of money in the market. Therefore, when the ones with a lot of money are in the market to make money, we should be there also, the fisherman is out there to catch fish, follow him to catch it as well, he’ll show us the way. That’s why we all love to trade during London/New-York sessions because it’s time the fishermen throw his net which’s bring liquidity needed to move the market. We want the moves, we don’t want sideways market. Simple!

The volume which our broker provides is tick volume. Tick volume represents the activity of the market participant, not the real bid/ask volume. That raises a question: Is activity important? Should I trade when there’s high activity or should I trade when there’s low activity? As explained above, we want the moving market, so we want high activity. When the big boys are active they’ll make trading decision which’s millions of dollar being thrown to bid/ask the market, the candle is moving fast because of the number of bid/ask, the change/movement of a candle shown the amount of activity by market participant. If there’re large amount of bid/ask, the movement is fast, therefore the activity is high, and so is the tick volume. That leads us to conclusion, the tick volume we are seeing is actually proportional to the real volume; in a simple word, when the real exchange volume is high, the tick volume offered by broker will be high as well proportionally. That brings us to another conclusion is that, what we are seeing is actually we are tracking the big boys, we see how active they are to make our own trading decision. When they are active, which’s shown by high volume, we’ll be there to go fishing with them as well. Hurrah, tick volume explained!

VSA as another tool

As time passes by, everyone wishes to fine-tune their own trading method to make it even better, I would recommend add VSA as another tool to their trading arsenal. You don’t have to study VSA as a method itself but just apply basic volume analysis could bring another edge to your trading. Here I’ll talk about the volume in support/resistance area (also called supply/demand area). Support/ Resistance areas have been proved to be respected in the market, the strong un-tested support/resistance areas have high probability to stall/retrace or even reverse the current market trend. Here’s a chart show how support/resistance and trendline being respected: 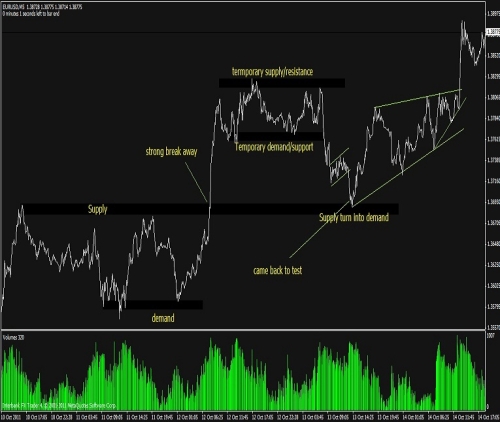 I have a few friends who solely trade price action, supply/demand area and trendlines, they set limit order and stop-loss just below/above the support/resistance area. Which’s a good method I reckon but too many times it fails; the successful trade percentage is just about 55% they said. I told them to watch out for volume action in such area as well. I’ll be more confident to buy if there’s Stopping Volume in support area since I know that the big players are supporting the price. Then I would even more confident to buy it on a No Supply candle since I know that there no supply left, so it’s safe to buy. Here’s an example of that. If I saw steady low volume in support area, I would consider staying out of the trade since the big boys is not active, they are not supported it, so do I. Just by understanding basic terms like Stopping Volume, No Supply, No Demand, we could be able to filter out a lot of bad trades, like this trade: 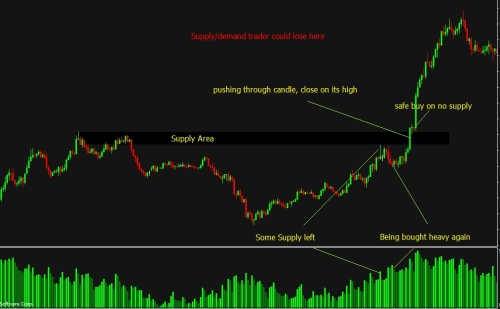 In the above paragraphs, I’ve been discussing about how we could apply basic VSA to our trading tools, I set supply/demand area as example since it’s most well-known method and it’s proved to be good over time. But we could apply VSA to any other method, if you are trading Moving Averages Cross, then I’ll recommend you’ll be more aware if there’re high volume on the cross since probably the big boys is taking position in the opposite direction, if the volume is steady, then it’s safer bet that the trend will continue its direction. If you are trading when RSI is overbought and oversold, then I would recommend looking for stopping volume on the overbought area, following by a No Demand to start selling, the opposite holds true for the oversold area. 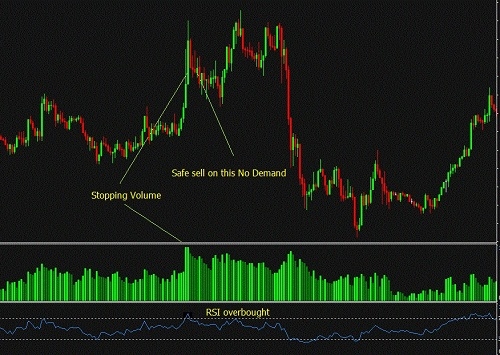 That’s just a few examples, basically if you already have a trading method, VSA could just maybe a final missing piece to your trading puzzle.

I will probably end my VSA series here. I hope you guys find it a good read and please comment if you have any question.

I wish success to your life and your trading.