I was very fond of reading when I was a child. I still love reading but the books I read now are very different from the ones I used to read. Back then, most of the books I read where solely for my amusement and entertainment. As I write this piece, I can recall a particular book that made an impression on my young mind – The Animal Farm written by George Orwell and published in 1945.

The thing is I did not particular enjoy the book and probably never finished it, but I was intrigued by a single phrase in the book “All animals are equal, but some animals are more equal than others". I knew it meant something else but could not comprehend what. Like any other inquisitive child, I started with what was familiar. I lifted my little hand and thought to myself “What a clever way to describe my fingers!”

Many years later, I learned that events in the book mirrored those in Soviet Union at the turn of the twentieth century. Although, the phrase was meant to have political significance at that time, I can still relate it to life in general today. For instance, I love all my friends but consider some of them more important to me than the rest. Again, I have preference for certain brands even though they offer nearly the same benefits as the rest and so on.

This maxim is also evident in the Forex market. In the United States, many traders have a higher regard for Unemployment numbers and the Non-Farm Payroll data than the nation’s GDP and Trade Balance even though they all report on the economy. I am pretty sure your trading system focuses on the few technical indicators you consider valuable and ignores the rest.

The point I am trying to make is that it seems in everyone’s mind there is a meter or gauge of sort that consciously and
subconsciously categorizes, prioritizes, measures and rates everything around us. This is important because we simply cannot have the same level of appreciation for everything otherwise we may end up wanting to eat every food that exists or trade every instrument out there for example. When this meter fails to apportion importance to something we become frustrated and if possible, we avoid that thing altogether. This is why psychologists say having too many choices can be overwhelming and we generally avoid what we do not understand.

Let’s find out what this has to do with candlesticks. 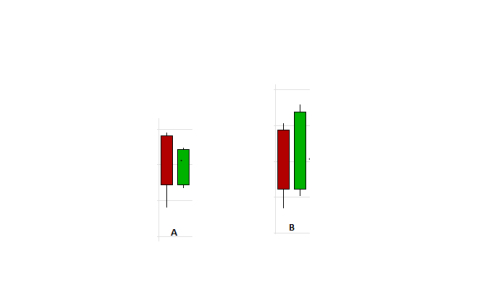 Pattern A for some reason is called bullish Harami while Pattern B is understandably referred to as bullish engulfing. You’d agree
with me that both patterns represent bullish reversals. But the question is which one of two represents a more bullish outcome?

The inability to answer this question correctly is the bane of many traders. Since it is impractical to trade every candle that appears on chart, there must be a way to attach significance to candles so we are able to filter out insignificant candles and focus our attention on the relevant ones.

Fortunately, there is a way. The solution lies in the answer to the question posed by contestant OneGoodTrade in the comment section of my previous article. He asked “what makes a candle go up or down?”

To answer his question, we must take a hard look at what a candle truly represents. A candle represents the battle between two opposing parties – the buyers and the sellers. When a candle is green (or white) buyers are in control, when a candle is red (or black) sellers are in control. It is safe to assume then that a long green candle means that buyers are very much in control. Based on this logic, we can point out Pattern B as more significant than Pattern A. It has a longer green candle and a pretty strong name as well.

This sounds plausible but there is a big problem equating significance to the length of a candle. It is one-dimensional and only presents the winner of the battle. Would it not be important to know how well the battle was fought? Would you consider a long candle on a major public holiday significant?

It is important not to use the length of a candle as criteria for relevance otherwise we fall into traps set by the opposing party. It is possible for one party to ‘allow’ the other party temporarily take control while they flex their muscles and marshal forces in the background then ambush the unsuspecting party at a desired point. To avoid this, we must always focus on the level of activity within candles rather than their length.

Law#2 or the Law of Activity states that the more activity contained within a candle the more significant the candle becomes. The activity within a candle essentially means the volume of trade operations within that candle. It is possible to get the actual volume from the stock market and other centralized markets but impossible to get these figures from the Forex market due to its decentralized nature. Fortunately, we have the next best thing called ‘tick volume’ which you will find on all Dukascopy trading platforms and other reputable chart software.

‘Tick volume’ measures the number of times the price ticks up and down. The theory is that price movements occur in relation to
trading activity and therefore tick volume can provide insight into the intensity of a given price movement.

Utilizing this law may not always provide the best entry points but will help you detect and avoid falling into traps. Here are some of the common traps you will find in the market. 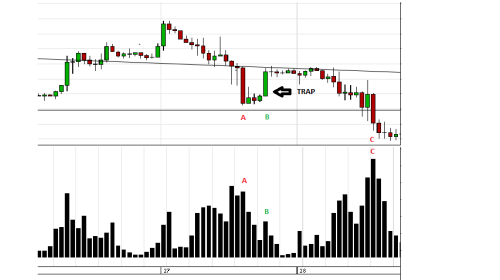 You can see that the move (candle A) below trend line resistance (former support) was backed by healthy volume (volume bar A).
Sellers briefly relinquished control allowing buyers to take price back up (candle B) to trend line resistance. Notice that candle B, a fairly long candlestick though not as long as Candle A, has disproportionately lower volume meaning that there was lack of significant resistance to the upward move. Sellers showed their might (candle C) and overcame buying interest resulting in an even higher volume than volume bar A.

Looking at the chart again (a 1-hour snapshot of EUR/USD). You will notice that volume is lowest during Asia session but rises during London session and peaks during New York session. One may argue that volume bar B was low because the session was winding to a close resulting in reduced level of participation. There may be some truth to this. Even though the move during New York session the very next day (candle C) validated the initial move down (candle A), it can be tricky using volume on intraday time
frames. For this reason, I recommend using volume on higher time frames like the daily, weekly or monthly time frames. 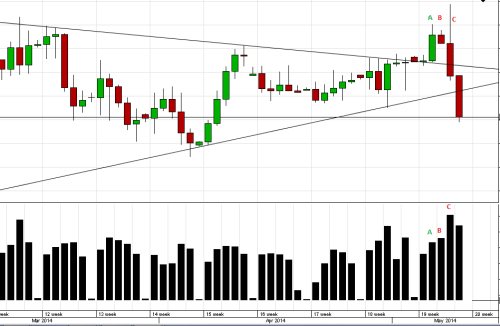 This wedge formation on the EUR/USD daily chart appeared to have broken resistance (candle A) but the bearish candle that followed (candle B) had more volume than A despite its length. An intense battle took place in candle B with the bears getting the upper hand. This should have raised a red flag that the bullish Candle A was a false move and that the real move was down.

Another benefit of this law is that it can be used as a leading indicator to predict price movement. 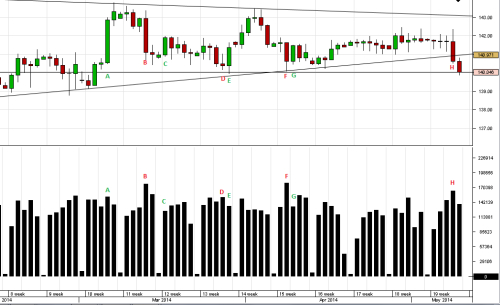 Before I conclude this article piece with one more example, I would like to dedicate this write-up to contestant OneGoodTrade from Romania who is my very good friend in the Dukascopy Community but very very bad friend on the Poker table. Nevertheless,
I would like to honour him by presenting what should turn out to be a One Good Trade. 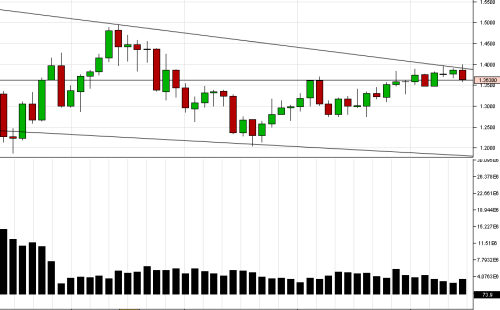 The monthly chart of EUR/USD above shows the pair is trading within a descending channel. In May, price reached resistance but was soundly rejected just before 1.4000 eventually closing at 1.3633. The volume bar is higher than the previous one signifying further losses ahead. I expect this pair to close below 1.3633 (open price) by the end of June.