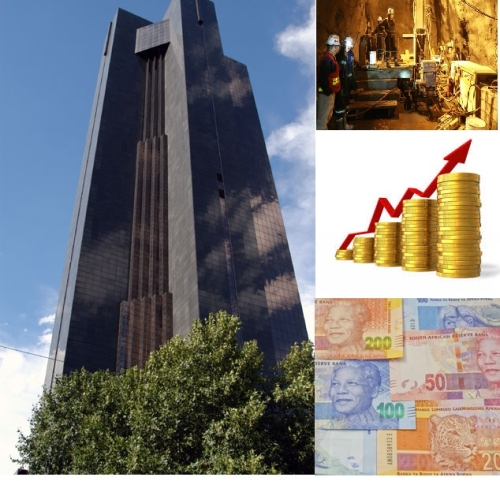 For the first time since October 2008, we are witnessing the USDZAR trading above 11. With Mr Lesetja Kganyago taking over as Governor of the Reserve Bank of South Africa (RBSA) on the 9th of November 2014, the investment community is eagerly waiting for action.

This Article looks at the fundamental and technical aspects affecting the rand.

The monetary policy in South Africa (RSA) endeavors to create a stable financial environment that is essential for economic growth and employment creation.

In February 2000 the RBSA introduced an inflation targeting framework and under this framework the inflation target was specified as a range between 3% and 6%. This band, together with the actual inflation rates achieved are shown in Fig 1. 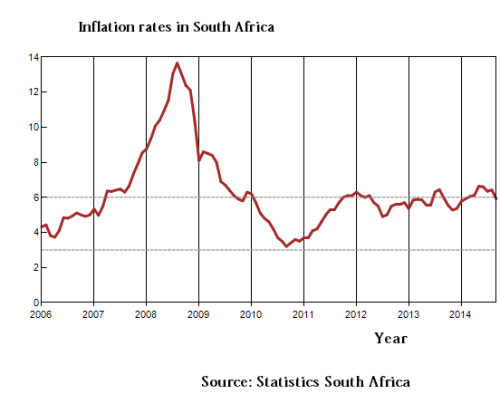 The Repo rate is another tool used by the RBSA in its mandate to achieve and maintain price stability. This is the rate at which central banks lend or discount eligible paper for deposit money banks. Fig 2 below shows the evolution of interest rate in South Africa in the recent past.

In 2014, the Repo rate was hiked twice from the initial level of 5% to the current 5.75%. The future direction of the interest rates will depend largely on the inflation expectations. Since now the inflation rate is within the targeted range there may be no need to increase the rate, but should it spiral beyond the range, an interest rate hike may be on the cards. From the latest monetary policy statement, the policy remains accommodative, and will continue to be supportive of the domestic economy subject to achieving its primary inflation targeting objective. Even with the newly appointed central banker coming in, the expectation is that the monetary policy stance is not going to be shifted.

At a GDP of USD351 billion, South Africa is the second largest economy in Africa behind Nigeria. Fig 3 below shows the contributions of various sectors of the economy to GDP.

As is being reflected in Fig 3 Finance and insurance, real estate and business services, General government services, wholesale and retail trade, catering and accommodation are the greatest contributors to GDP at 21.5%, 17.6% and 16.9%. Though endowed with vast mineral wealth in gold, diamonds and platinum Mining and quarrying only contributes 7.7% as of the Q2 2014.

Fig 4, shows the GDP growth rates in South Africa from 2011. As can be seen in Fig 4 the county avoided sinking into recession with the 0.6% growth in the second quarter of 2014 after contracting 0.6% in the first quarter. After the crippling industrial action the rocked the platinum mining sector growth has been stalled in 2014.

Over the years South Africa has been the greatest recipient of foreign investment in Africa because of its good infrastructure, vast natural resources, energy supply and stable political environment. South Africa was the largest recipient of private equity on the continent, accounting for 53% of total investments in 2011, according to Preqin. According to the World investment report of 2013, “Chinese FDI stock in Africa stood at $16 billion at the end of 2011. South Africa is the leading recipient of Chinese FDI in the continent, followed by the Sudan, Nigeria, Zambia and Algeria.” However 2011 and 2012 Nigeria and Mozambique were the leading recipients of FDI flows in Africa. 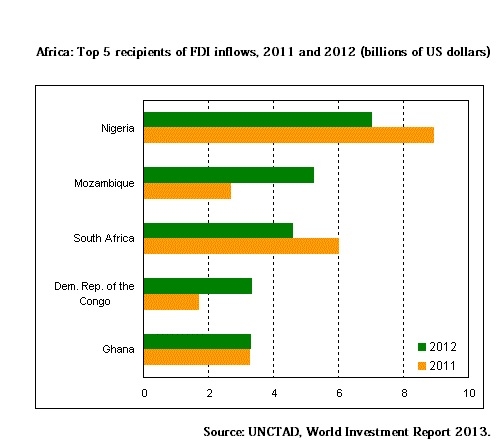 After rebasing its economy and formally being recognised as the largest economy in Africa, Nigeria has drawn the attention of many investors. With a population of close to 174million people, the Nigerian market is lucrative to many investors.

South Africa is facing stiff competition from other emerging nations on the FDI front. The continual depreciation of the rand will not be conducive to attract new investment flows as the investors will need to compensate for the losses in exchange rate. An unstable and depreciating currency will not attract portfolio investment and in the worst case scenario may lead to capital flight as investors seek to cut on losses and invest in more stable economies.

South Africa is blessed with vast natural resources. South Africa, it is the largest exporter of coal, has been a world leader in diamond production and produces more platinum and similar metals than any other nation.

South Africa is home to some of the deepest gold mines in the world and accounts for almost 50% of the world’s found gold reserves. South Africa’s gold production in 2013 amounted to 5,369,691 ounces.


However in recent years gold production in South Africa has been on a decline. For a resource economy like South Africa where minerals account for a high proportion of GDP and export earnings, the decline in both volume and value is disturbing. In gold sectors there looks to be no end in sight to the production falls while metal prices remain depressed. As can be seen in Fig 6, there seems to be an inverse relationship between the Gold price and the value of the USDZAR.

South Africa is the largest producer of platinum in the world, accounting for 78% of the world’s platinum with over 163,000 kilograms. The platinum industry was hit by industrial action between January and June 2014 which is estimated to have cost the economy around 1.2 million ounces of production, worth about USD2.25 billion.

Low global prices, reduced production and damning strikes have cost the economy over the past few months resulting in the underperformance of the economy and therefore weakening the value of the rand against the major currencies.

South Africa recorded a Government Budget deficit equal to 4 percent of the country's Gross Domestic Product in 2013 as shown in fig 7.


Government debt in South Africa has been on an increase. It recorded a Government Debt to GDP of 46.10% in 2013 as shown in fig 8

The increasing budget deficit and debt levels indicates that the government is funding the deficit with debt. However if the debt continues to increase, it may reach unsustainable levels which might require the government to print money to pay off the debt thereby weakening the rand.

On the 6th of November 2014, Moody’s downgraded South Africa’s investment grade credit ratings to “Baa2/P-2” from “Baa1/P-2 and credit outlook was revised to stable from negative. This has a detrimental impact on the cost of finance for South African businesses as financiers will apportion a higher country risk premiums as a result of the downgrade. Investment in the country may also slow down as a result despite being rated as stable.

EFF has been gaining popularity among the mine workers and marginalized members of society with their socialist manifesto. Should this popularity translate to votes in the next election then it may spell doom for the economy as they advocate for the seizure of mines and farms. As their support grows, the investment communities become jittery as the security of their investment and tenure will not be guaranteed under the leadership of the EFF.

The fundamentals in South Africa call for a weaker rand and it is the responsibility of all stakeholders to revive the ailing currency and not the prerogative of the central bank only. The technical analysis also points out that the on-going rally will last longer before a major decline is seen.
Translate to English Show original Toggle Dropdown