Community
Article contest
The Pivot Point - Trading Strategy
Hello Community Members, this is my very first article. So, I want to start with the basic strategy which is the base of the Forex trading. The following pivot point trading strategy has been around for a long time. It was originally used by floor traders. This was a nice and easy way for floor traders to have an idea of where the market was going during the course of the day using just a few basic calculations. The pivot point is defined as the level at which the market direction changes for the day. Using some simple math and the previous day's high, low and closing prices, a series of points are set. These points can be critical support and resistance levels. The pivot level, support and resistance levels calculated from those prices are collectively known as pivot levels.


The Pivot is the point around which market moves

Every day, the market you are following has an open, high, low and closing price for the day (some markets, such as the Forex market, are open 24 hours, but we generally use midnight GMT (Greenwich Mean Time) as the open and close time). This information basically contains all the data you need to use pivot points. The reason pivot points are so popular is that they are predictive as opposed to lagging. You use the previous day's information to calculate potential turning points for the day you are about to trade (present day). Because many traders follow pivot points, you will often find that the market reacts at these levels. This gives you an opportunity to trade.

A perfect setup would be for the market to open above the pivot level and then stall slightly at R1 then go on to R2. You would enter on a break of R1 with a target of R2 and if the market was really strong close half at R2 and target R3 with the remainder of your position. Unfortunately, things don't always go according to plan we have to approach each trading day the best we can. I have picked a random day from the past, and what follows are some ideas on how you could have traded that day using pivot points.

Take a glance at the 5-min chart below: 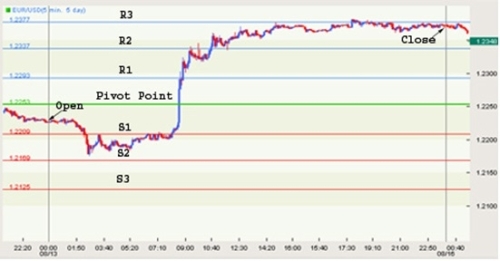 The Breakout Trade:
At the start of the day, we were below the pivot point level, so our bias is for short trades. A channel formed, so you'd be looking for a break out of the channel, preferably going downwards. In this type of trade, you would place your sell entry order just below the lower channel line with a stop order just above the upper channel line and a target of S1 (1.2209). On this day, though, S1 was very close to the breakout level so there wasn't a huge profit to be made in the trade (13 pips). This is a good entry technique for you. Just because it wasn't hugely profitable on this day doesn't mean that it wouldn't have been more profitable on another occasion. 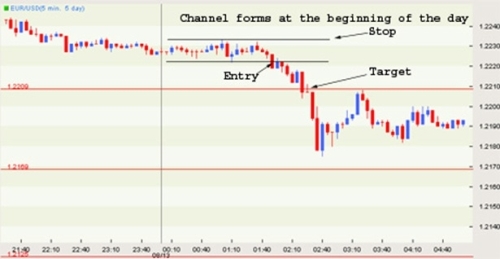 The Pullback Trade:
This is a great setup. The market passes through S1 and then pulls back up. An entry order is placed below support, which in this case was the most recent low before the pullback. A stop is then placed above the pullback (the most recent high - peak) and a target is set for S2. The problem, though, in this example, was that the target of S2 (1.2169) was too far, and the market never took out the previous support (shown on the graphic below with the grey line), which was an indication that the market sentiment was beginning to change. 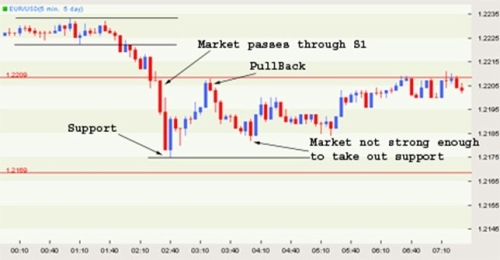 Breakout of Resistance:
As the day progressed, the market started heading back up to S1 (the top red line in the picture below) and formed a channel (also known as a "congestion area"). This is another good setup for a trade. An entry order is placed just above the upper channel line, with a stop just below the lower channel line and the first target would be the pivot line. If you were trading more than one position, then you would close out half your position as the market approaches the pivot line, tighten your stop and then watch market action at that level. As it happened, the market never stopped and your second target then became R1 (1.2293). This was also easily achieved and I would have closed out the rest of the position when that price was hit. 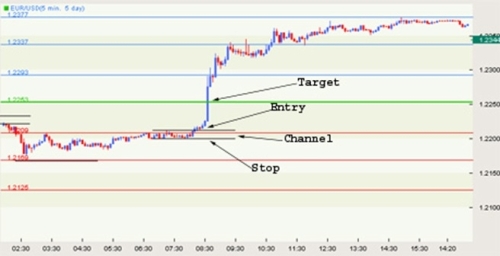 Advanced:
As I mentioned before, there are several ways to trade using pivot points. A more advanced method is to use the cross of two moving averages as a confirmation of a breakout. You can even use combinations of indicators to help you make a trading entry decision. It might be the cross of two averages and also MACD must be in buy mode. Mess around with a few of your favorite indicators but remember that the signal is the breaking through of a level and that indicators are just confirmation. 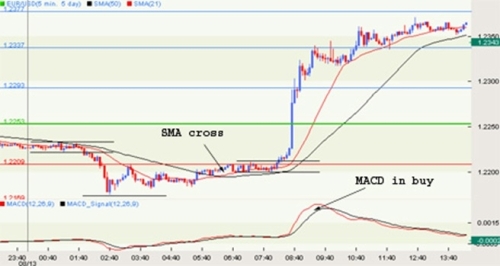