Daily and 4H charts are used for analyzing forex markets.Thus, when trading Forex on the daily chart there is a real risk of large losses, but on the other hand - a good opportunity to capitalize on intraday fluctuations . If we are talking about the daily charts, the most unmistakable signals here are systems based on a moving average.

As an example, consider the four-hour chart, on which classical engineering models are better seen than on the daily chart. In addition, the use of candles well shows the major reversal patterns, such as hangman, hammer, etc. As an individual model can be restricted to species doji. Fairly good results are obtained with the use of trade Fibonacci levels. By the way, the system, which are based on penetration levels, determined by the grid or the Fibonacci numbers, on the Limits of the Trade channel or just on a psychological basis, very good work in CHF due to the volatility of the currency.At this time interval can trade with Parabolic System: it is necessary to trade along the trend prevailing on the daily chart or 4H chart.

Trading on the hour, half hour and quarter-graphs requires careful attention in relation to the volatility quotes Dollar / Franc and combinations of candlesticks. It makes no sense to rely on classical technical analysis, however, like to use a parabolic. The latter can be found another use - to determine the levels on it, a break which can subsequently cause strong price movement. Often the graphs CHF (in particular extent - quarter-on) can be observed horizontal lines arrayed above the SAR. Periodically price recorded on the data lines and with the passage of time is increased volatility. If a trade lined up at the break lines, you can make good money, because after the breakdown of the price goes at least 40-50 points.

I will share with you this strategy of mine to enter the market Forex by using jforex platform for Duka scopy .

Take profit : let your profit run ( or when new parabolic sar point appear in opposite direction), you can use trailing stop

Do this strategy to se how the price respect the point of the SAR (for long and short positions , respectively).

Hent: This strategy is so easy and profitable. 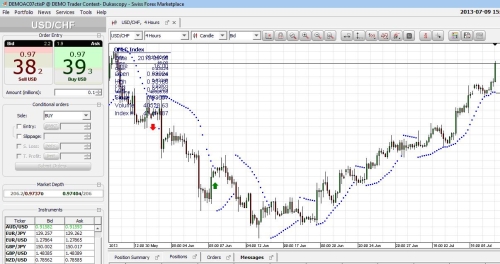 The arrows show an example of entry and exit point

Who knows, maybe in one or two hundred years, the laws of the forex market, traders worked out today on a whim to become the undisputed and proven axioms. I wish you all sorts of different and creative success!