Community
Article contest
The Curious Case of Gold
Let’s begin with a quiz.
While days of the gold standard are behind us, gold still plays a role in day-to-day life, be it as a currency or commodity. According to World Gold Council, the Turks amassed over 3,500 tons of gold “under-the-pillow” by 2014 and Russia and China are stocking up. Is gold truly an investment or are people busy stacking “rocks” which could be another tulip mania? 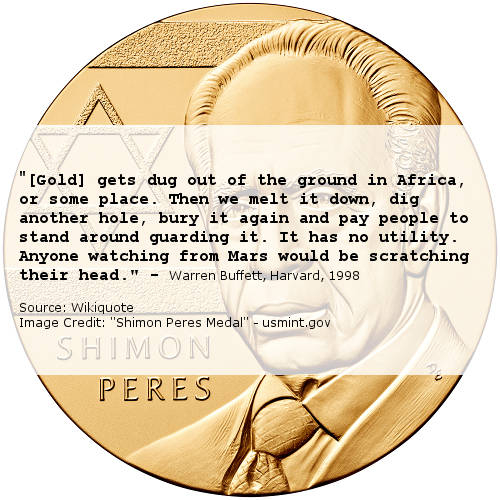 Gold Has Never Been Worth Zero

Gold investment advisers say when countries start stocking gold, it is not indicative of wealth but potential economic turmoil. They also say the accumulation of gold indicates what other nations and hedge funds think about the US dollar and the global economy. Others fall in the group of the British economist John Maynard Keynes and believe that “gold is a barbarous relic”.

The image below shows the rise of gold since 2001 and how gold reacts to economic events affecting the US dollar. 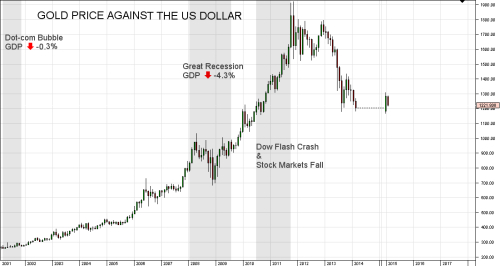 Many also claim that gold has never been worth zero, meaning when crisis strikes, gold is a hedge and will retain its value. These investors fail to answer two key questions:

When one says gold has never been worth zero, do they factor in the cost of producing an ounce of gold and current inflation? Since gold is quoted in fiat money, what would be its value if the US dollar went belly up?

The answer is zero since we would have no fiat currency to weigh it against. Gold would have to be weighed against other real commodities such as wheat and oil meaning, we would go back to commodity money. It’s important to note that the US holds 75% of its currency reserves in gold.

In Canada, the beaver pelt was established as the standard currency after fur trading companies learned that the First Nations were not interested in gold or silver but everyday commodities such as sugar and shoes.

In his book, Reading about the World Vol.2, Paul Brians tells of how Joannes Leo Africanus, author of Description of Africa (1550) while in Timbuktu witnessed salt being sold for 80 ducats (not Dukascopy's Dukats) since salt was in very short supply.

Both those who claim gold is a hedge, investment or it’s just a shiny metal could be right. It depends on the economic times. When the world’s economy is flat on its back or we are in full blown war, gold might not do you any good, not to mention the possibility of confiscation by governments such as Executive Order 6102 of 1933. To better understand this, let’s take a look at the inverse relationship between the dollar index and gold.

Correlation Between Gold and US Dollar – Is Gold a Currency?

While this theory has its critics, there is believe that, when the US dollar weakens, it directly affects gold price through encouraging gold purchase by other nations. This in turn creates demand raising its price since the price of gold is usually quoted against the dollar
.
That said, it is important to note that when the US dollar weakens, it not only weakens against gold but other major currencies as well. This means that there is no “special relationship” that exists only between the US dollar and gold. So, one can look at gold as another “currency” that trades against the US dollar, not a commodity such as oil, wheat or corn.

The chart below shows the correlation between Dollar Index and gold since 1974. Key events: 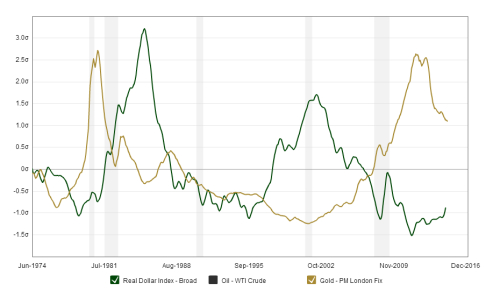 The chart above is indicative of negative correlation between the Dollar Index and gold. Next, we look at the gold price against 5 currencies. It’s seen to act as a currency as well, it rises and falls across all five currencies not just USD. 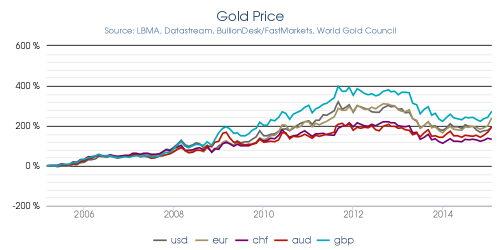 Cost reporting by gold miners has been shady over the years until 2012 when the World Gold Council and major gold companies came up with the AISC standard - all-in sustaining costs. It places costs for producing an ounce of gold at $1000 to $1200. Compared to the black gold (oil), the cost of production is way high.

According to the U.S Department of Energy, the costs of oil production are:-

It Costs Money to Print Money Making A Dollar 95.1 Cents

The table below shows how much it will cost to print dollars in 2015. 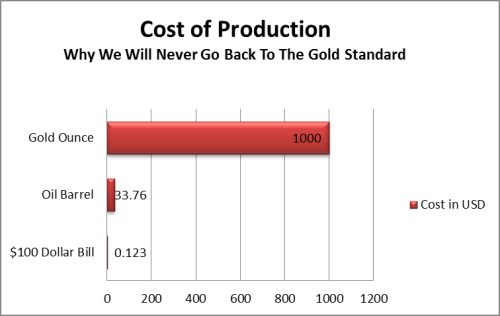 From the tables above, you can tell the cost of producing gold is quite high compared to oil and printing money. This explains why it's easier for central banks to print more money and inject into the economy as stimulus rather than back their currencies with gold. The table above also shows why oil producing countries in Middle East get more “bang for their buck” compared to top gold producing countries.

While production of money, oil and gold are all subject to inflation, the cost of producing gold does not seem sustainable if prices are to remain at the current levels.

Why Are Countries And People Stocking Up On Gold?

Past economic turmoil and the constant reminder that the market is due for another “correction” is driving people to buy gold. People also like to follow the crowd. When investors heard of John Paulson and George Soros increasing their gold stock in 2012, they followed suit – and the price came tumbling down. There is also the rumor that most mines will dry in the next 20 years.

After its peak in 1972, South Africa cut its gold production to less than 200 metric tons in 2013. While China produces 14% of the world’s gold, its miners are facing depleting reserves, and falling ore grades.

Gold is Too Expensive to Produce

With the cost of producing gold at over $1000 and current prices at $1200, most mines are breaking even or reporting losses. Reports indicate that, should gold trade at lower than $1000, 30% of mines would close. This hints as to why gold bugs are speculating $3000. However, if gold was to go that high, closed mines would reopen as well as create another gold rush. Higher supply than demand would then fuel a sell-off.

To Join the Big Boys' Club

Most emerging markets and hedge funds are looking to diversify their portfolios and gold is one of them. The image below shows gold accumulation in tons amongst Russia, China, India and Turkey in the last 10 years. 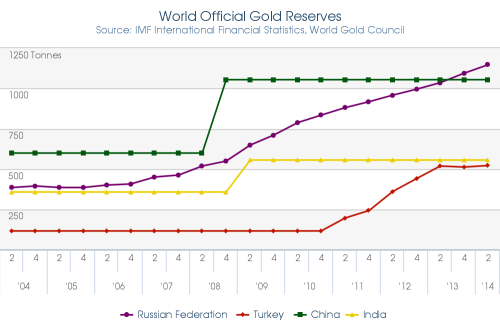 While the above chart looks “threatening”, look at the 4 countries compared to US, Germany, Italy, and France, gold represented as a percentage of total reserves. From the image below, it’s clear why China and Russia are stocking up on gold. They are not planning “total world domination” or "World War Z", they are leveling the playing field. 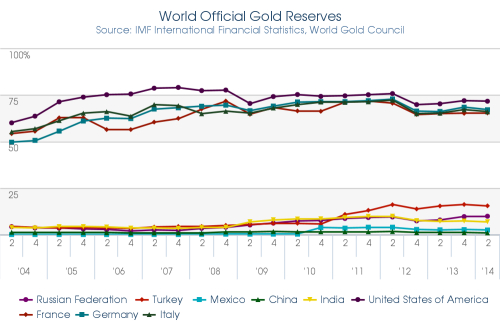 Negative interest rates plus pumping money into the economy has some investors worried. While this is done to stimulate growth, when current interest rates are lower than the consumer price index or inflationary rates, long-term investors turn to gold and other metals to reduce exposure. 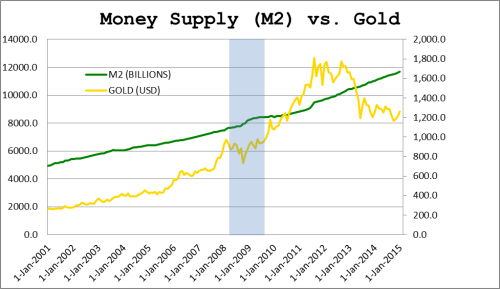