Community
Article contest
The Carry Trade
Introduction :
I've looked at the Carry trade in short bursts across previous articles, but I thought I should have a more detailed look at them this time around. Furthermore, I want to explore some other possibilities around the carry trade, such as the best way to bet against it and so on.

First of all though, we need to consider that carry is in fact a very powerful aspect, it really is. I will demonstrate this by first looking at the Argentine Peso. Now the ARS is no ordinary currency, sure. In fact it currently has a yield of around 32%! as shown by this chart.

We must remember that in late January this year, the ARS crashed 15% in one day. A huge move, something frankly unthinkable for a major currency such as the EUR or AUD. This huge volatility is why traders and investors demand such a high interest rate.

But even though the ARS had a devaluation event earlier this year, it is still positive YTD. That is, if you had bought the ARS on January the 1st, you would have made money.

This to me is an absolutely incredible reminder at how powerful carry is! As even after a currency crashes, the interest afforded to you still means you profit.

A longer time series shows the quite frankly huge returns the ARS has had over the past decade or so, yet if you were to load up a spot chart of the ARS over this time period, you would see the currency has fallen by over 50%!

Anyway, enough on the ARS... That was just to prove that in the long run, a currency doesn't have to rise for you to make significant profits. Onto more familiar carry trades, and in the G10 space that involves the NZD, AUD for example. And for EM, it may be ZAR, TRY or BRL

One critical factor when trading a carry basket, is that of implied volatility, this is because of "carry/vol" or the relationship between the expected interest you earn, and the expected volatility you are likely to experience.

The two factors are also strongly related, for example, if a currency is expected to be more volatile, investors will demand a higher interest rate, hence we see a relationship as shown below 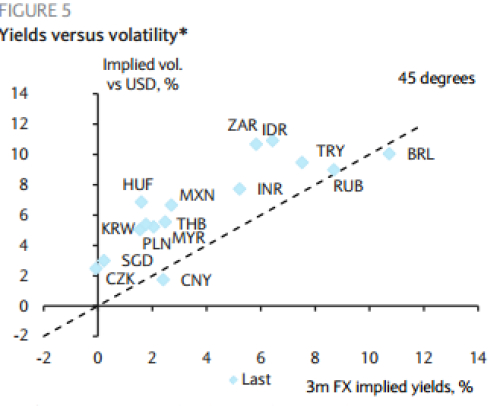 For something like the NZD, the implied carry has been rising over the past few months and quarters as the RBNZ has been raising rates. Now if volatility had also been rising, the NZD would not have risen, but as volatility has dropped significantly we have seen demand rise as carry/vol has increased hugely (as shown below)

Simply, as this line rises, the NZD becomes more attractive as a currency to buy, and when it falls vice versa.

Another way to illustrate the importance of implied volatility is by looking at this chart;

This chart shows levels of volatility in white (inverted) vs the NZD. Its clear to see the incredibly strong correlation, and so long as volatility is low, there is no way the NZD drops.

A popular strategy to employ for a carry trade is that of being long carry, and buying deep OTM puts, This means you pay a small premium to protect against any downside moves. For example, if you had bought OTM puts in 2008, the profit from those would counter out the loss from the NZD dropping hugely, hence you are protected. One tendency of carry trades is that they rise slowly, and drop like a stone. So timing protection is key, and if you get it wrong, then you lose a lot of money.

But looking at todays market, you can pay a small % of your monthly carry to protect against downside, hence it would make sense to do so.

From looking at volatility surfaces, it is clear that this has been the case as long term puts trade at a higher price than calls. 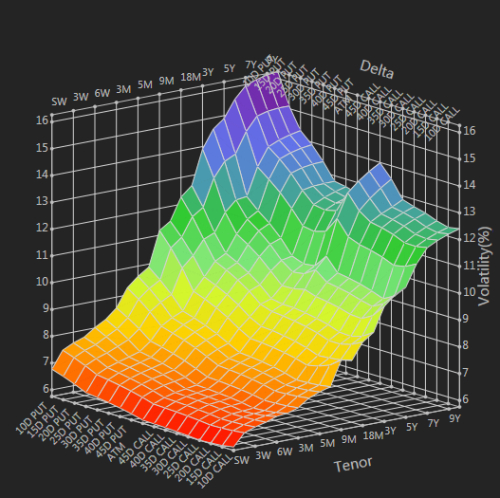 But however good being long carry is in the short term, as highlighted above, in the shorter term carry currencies can sell off hard. So what is the best way of playing this?

No matter which way we decide to trade it, we are going to have to pay a premium to be short, if we trade via the spot markets we pay overnight carry. If we trade via options we pay theta as the option price decays. However in today's market, with volatility so low, premium prices on options are low. And considering the chart earlier of implied volatility vs. the NZD, we could see that being long vega would be a good idea if implieds were to rise. Even though there is a premium to pay for the downside, it is at its lowest in years as seen below.

So with such little premium to pay, and implied vol so low, looking at the options markets to play downside is a "cheap" way to play any move lower.

Obviously I have only looked at the NZD here, and more likely a basket of currencies would be traded, but the idea is the same regardless given current market conditions. However, as the introductory point was making, carry is extremely powerful and I urge trades to not get stuck being short carry currencies, because it is often death by a thousand cuts.

Thank you for reading, if there are any specifc questions, feel free to ask.
Translate to English Show original Toggle Dropdown