Community
Article contest
Tapering of Quantitative Easing. What it Means to Traders.
Introduction

On the 13th of September 2012 the United States of America's Federal Reserve bank (Fed) announced a third round of quantitative easing (QE3). Under QE3 the Fed was to launch a USD 40 billion per month, open ended bond purchasing program of agency mortgage-backed securities. On December 12 2012, the Federal Open Market Committee (FOMC) announced an increase of USD 45 billion to the open ended purchases bringing the total to USD 85 billion worth of stimulus. The EURUSD had opened at 1.29 on the 13thof September 2013 and following the announcement a bullish trend was unleashed. Below is the hourly chart of the EURUSD during that period. 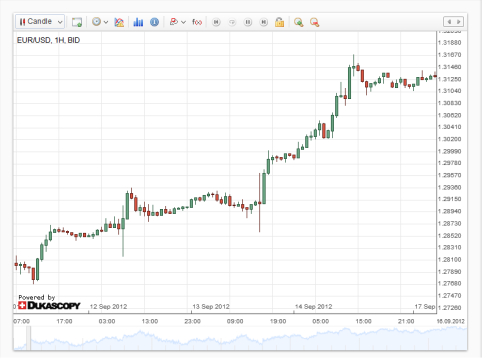 Having witnessed the signs of economic growth, the Federal Reserve announced its intention to taper the QE3 program contingent upon continued positive economic data on 19 June 2013. Tapering is a gradual winding down of central bank activities used to improve the conditions for economic growth, in this case QE3. Below is an comical illustration of tapering. 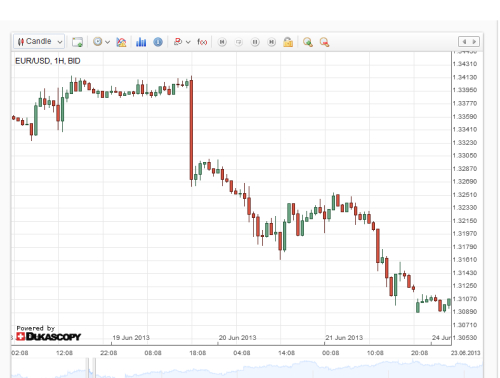 First of all investors should realise that tapering does not mean an end to the bond buying program, rather a reduction in the pace of the purchases. The supply of dollars will continue to increase though at a decreasing rate.

From the above graph it can be seen clearly that from September 2012 the money supply has been increasing at a fast pace as a result of QE3. So as the tapering begins to take effect the gradient of the line is expected to start to decrease though it will continue to rise. When the program ends then the line will be expected to more or less flatten.

QE3 was introduced to stimulate the US economic recovery. The signs of this recovery are now evident with the unemployment rate at 6.7%, PMI numbers are north of 50 and consumer confidence is high. Though recovery is fragile the growth that has been witnessed and the expectations are fairly sufficient to start reducing the stimulus program.

As supply of money increases so does inflation. The Federal Reserve has a 2% target on inflation and this target will be achieved with the current program. The economy continues to recover and grow steadily which will result in improved consumer demand which in itself is also inflationary.

The latest reading of inflation came at 1.1% and the expectation is that it will continue to gravitate towards the target of 2%. I'm of the opinion that the inflation rate will bounce back to the 1.5%-1.6% in March and the 2% target can be achieved by the year end of 2014.


Impact on the EURUSD

The improved economic conditions, reduction in the rate of increase of money supply, increasing inflation and prospect of an interest rate hike support the case for a stronger dollar. If the Federal Reserve tapers by another USD 10 billion in the upcoming FOMC meeting then selling the EURSD will the trading idea.

When liquidity is in excess and the supply of money continues to increase investors look to store value of their wealth away from
currencies and gold has been the major beneficiary of these funds. As expected when the QE3 program was announced there was a massive jump in the Gold price. With the tapering program underway the gold price is expected to soften as the USD strengthens and demand for the commodity weakens. So going short on gold will be the trade idea.

Monetary policy tools used by central government to influence economic growth should be carefully accessed so that their impact cannot negatively affect the performance of portfolios. So with the end of the QE3 program traders should sell gold and buy dollars.