It’s easy for beginners to get caught up in exciting new words and to explore the intricacies of Fibonacci Bollinger exponential moving parabolic resistance zones, but perhaps equally important is asking yourself the question: what actually makes the price go up and down?

Supply:
Supply is a term used to describe how much of something there is in existence, how many shares in a particular stock for example, how many government bonds have been issued, or how many units of currency there are in circulation. Supply is always finite. There is a limited number of shares in Apple. You can’t keep buying them infinitely, even if you had the money; eventually there won’t be any more to buy and you will own 100% of it! If you study economics, you’ll be familiar with a supply and demand diagram. In this case, the supply is fixed. It doesn’t matter how high or low the price is, the supply is always the same, as shown by the diagram. 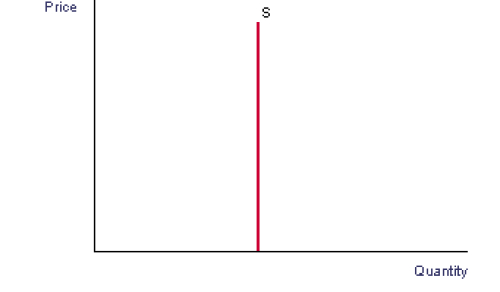 Demand:
Demand represents how much people want something. The demand for Apple stock is how many people there are trying to buy shares in Apple. This changes over time. If Apple releases a report that states that the company has tripled its profits in a week and are going to give out huge dividends, then the shares become more attractive. This means investors all want to buy shares in Apple, or the demand for them has increased. Equally, if it was reported that Apple had been hacked and every person who used Apple pay had their account drained, nobody would want to own that stock. Everybody would want to sell their shares, but nobody would want to buy it. This means that demand for shares, or currency can fluctuate a lot. The image below shows how a shift in demand causes a big increase in price. 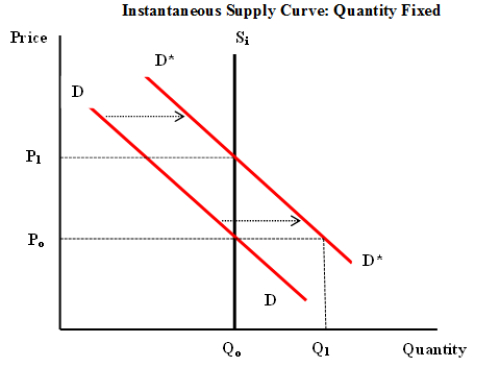 Example
It’s perhaps easier to think about it on a smaller scale. Imagine there are 4 men in a bar. One of them says that he wants to sell his car. He says that it is a 20-year old rust bucket that breaks down every 5 miles. Two of the other men look at him and say that his car sounds rubbish and they don’t want to buy it. The other one says that he needs a car, so he will buy it for 5 USD. The seller of the cars says that is very cheap, but because nobody else wants to buy the car, he has to accept the offer of $5.
Alternatively, if the man who is selling the car says that he has a brand new Ferrari outside, one man may say that he wants to buy it for 5 USD. The seller asks the other two men if they want to buy it, and one of them says “yes, I’ll pay 1000 USD for it” and the other man says, “I’ll pay 10,000 USD for it”. Now, because the seller has been made 3 different offers, the demand for his car is much higher. This means there are more buyers than sellers, so the buyers must compete with each other to make an offer high enough to buy the car. Of course, the seller will not sell his Ferrari for $5 because the other man offered $10,000 for it.
This style of bidding happens in the stock and Forex markets too. When there are more buyers for a stock than sellers, the buyers must compete with each other to buy it, each trying to offer more than the other, driving the price up. When there are more sellers however, the sellers will keep reducing the price until somebody will eventually buy it because the price is so low.


Concluding thoughts
Looking at the markets in this way can help you understand the theories of market movement more. For example, if there is a simple moving average crossover, many investors might see it and think of it as a good time to buy it. If all investors see that, they will all bid for a stock, driving the price up. It’s sometimes strange to think that the underlying thing that makes prices rise and fall is something as simple yet complicated as human nature.

Thank you for reading, I hope it was useful. ????
Translate to English Show original Toggle Dropdown