Community
Article contest
Strategy for Forex as a Part Time Job
In this Article I will discuss a strategy based on Bollinger band and price action that can not only used with any currency pair, but by anyone interested in forex as a part time job. The system is best for 4hr and daily time-frame but it’s too strong that it can be used on the lower time-frames i.e. 30min, and 1hour timeframe. But my sole focus will be with those that need to only take about 30mins a day looking at the Forex charts and by the end of this article, you can do a back test with any chart and see how trading Forex can be as easy as ABCD.

1. Setting up your Chart
Choose the currency pair you are interested in (if you are a beginner at the method I would recommend the major currency pairs i.e. AUDUSD, USDCHF, USDJPY, GBPUSD, EURUSD and the NZDUSD)
Choose the time-frame (I would recommend the 4hr or 1day)
Add Bollinger Bands from the Indicators
Finally, know your risk management (how much are you willing to lose if the trade goes south)

2. Trade entry
In order to make the best entries for the trades we need to wait for the formation of a strong candlestick pattern i.e. a pattern like the Bearish Engulfing, Piercing Line or Bullish engulfing at the upper or the lower Bollinger bands. And all entries are performed at the start of the new candle, when a candle stick pattern has been confirmed.


2.1 The Sell Signal
For the Sell signal we consider the formation of the Bearish Engulfing pattern at the upper Bollinger Band.

2.1.1 Features of the Bearish Engulfing pattern for sell entry
The Second Candle is bearish and completely engulfs the body of the first candle. 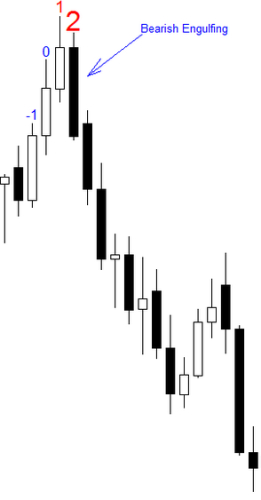 In instances of a small first candle, the second candle has to be big enough to engulf the previous two or more candles.

At least the first and second candlesticks involved in the formed Bearish Engulfing pattern should have broken out of the Bollinger Upper Band strongly. 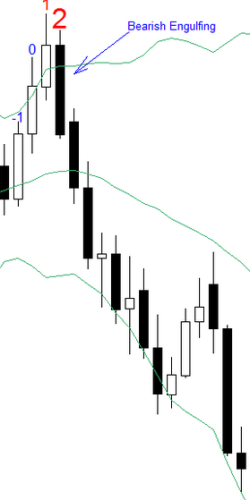 
2.2 The Buy Signal
For the buy signal we consider the formation Piecing Line or Bullish engulfing at the lower Bollinger Band

2.2.2 Features of the Piercing Line pattern for buy entry
The first candlestick is a big bearish candlestick

Both of the first and second candlesticks should have broken out of the Bollinger Lower Band strongly.

4.1 Conclusion
The strategy is not foolproof, sometimes it will fail but it will work for over 80% of the trades. In order to fully understand this method you need to;
Know the different patterns described i.e. the bullish and bearish engulfing pattern and the piercing candlestick
Do a back test to identify possible entries and exits. And once you start using the method only enter and the upper or lower band and you should be strict about it.
Start with low volatile currencies then advance to the high volatile currency pairs


Thanks all for bearing with me to the end. Please like and comment or criticize anything about the article. If you need more guidance please feel free to comment. I will always reply. Thanks so much and happy trading