Community
Article contest
Risk Analysis and Custom Indicator for Tdurai84's Winning Strategy
This article refers to tdurai84's article:
Review of Winning Strategy in Dukascopy Strategy Contest
Whenever I download the strategy of a contest winner, I ask myself: Would this strategy work in the long run, and which amount of risk/leverage would be optimal?
The answer to this question is what this article is about.
So I plugged the strategy into the tester, using 1min bars with cubic spline interpolation on EURUSD beginning 2009. Those settings would give me enough speed for the backtest but also enough precision to be confident with the results, since the strategy uses 10min bars only and no ticks:

So the strategy made 1.4 million out of 100k in three years. Not bad.
Note though what would have happened if we started three months ago:

We had a nice equity peak of about  $160000 but after that the account pretty much crashed and burned.
So the question would be: Which risk settings would yield acceptable results without killing my account, considering there may be times that the strategy does not work well?
Before we can answer let me clarify two common misconceptions about money management:
Fixed vs variable Lot sizes
What is better here depends very much on the consistency of the strategy or it its largest losses.
With fixed lot sizes the constant profit or loss percentage is added/subtracted to the account balance whereas with variable lot sizes every profit or loss percentage is multiplied to the account balance.
Hence if the strategy has potential big losers and is pretty inconsistent in its results fixed lot sizes would be the better choice, but if the largest loss is limited and the strategy consistent enough, variable lot sizes would be better since we can compound gains.
Since the markets operate at their own will and desire the answer will very much depend on the time chosen for testing. Very few strategies will operate in any market condition in any period of history.

Now let us compare two long term runs from the strategy beginning with 2009 until now.

In the first instance use fixed lots with a risk of 11% on the initial deposit. As we can see the graph looks rather steady without huge peaks and valleys: 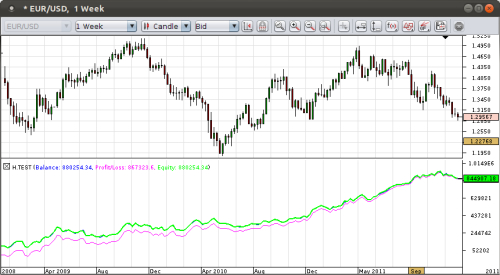 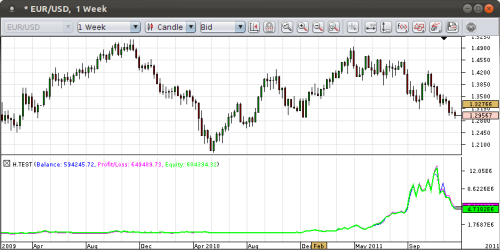 As you can see here, the peaks and valleys are much more dramatic, with equity going up to 12 million dollars (!) and then dropping down to 4.7 million. Needless to say, this would have made Dukascopy very happy, earning half a million dollars in commissions

To conclude, if your strategy is very reliable, you would want to use variable lot sizes to take advantage of compounding, but if there are larger strings of big losers, fixed lots might be a smoother ride.

While drawdown seems dramatic here, note that we still end up with more than five times as much money than with fixed lots. So if you could stand the adrenaline of the big swings in equity this would have been the favorable strategy, provided you started somewhere before November 2011.

Below we will compare the two money management schemes in the last three difficult months.

What is the optimal risk?
How much risk should we take in order to maximize profits?
More risk does not necessarily mean more profits. If there is a string of losers in the strategy more risk kills the account more quickly as we saw above. Interestingly in this case lowering the risk settings increases the profitability of the strategy.

Another limiting factor is the maximum drawdown you are willing to allow. The more drawdown you allow the more profit is possible, but you eventually have to know where your pain threshold is. For me this value is about 25% to 30%, since it would take gains of 33% percent or 50% respectively to pick up again to break even. The sweet spot here is probably at about 20% which means it only needs 25% to pick up again.
In order to answer those questions, I added variable lot size money management to the strategy and added a parameter that allowed me to switch between the two money management approaches. We will step up risk from the classic 2% rule up to the 20% risk used in the contest. Furthermore we test fixed and variable lots money management. We will allow a maximum drawdown of 30% to weed out all the settings which would decimate our account below our pain threshold:

For optimization we choose the last three months as the time period since the results have been very mixed there and with quite a bit of drawdown:

Notable also is the concentration of top ranked settings with variable lot size and risk in the lower teens. How good those settings are when the strategy runs well show the charts above.

Let us sort the optimization results according to the number of trades to see how the settings fared which made it through:

As we can see fixed lots clearly dominate the list, followed by variable lot sizes. So, again, in times when performance is inconsistent, fixed lot sizes tend to be better.

Using the Custom Indicator for discretionary trading
To further understand, how the system works, I coded a custom indicator which shows the entry and exit signals of the strategy on the chart: 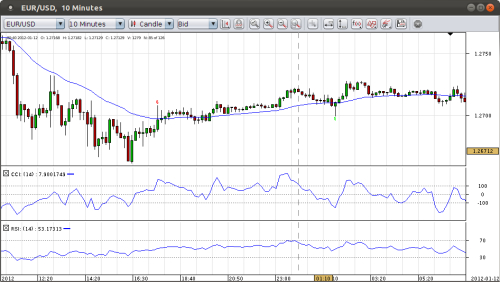 The indicator draws the signals and the EMA, but the CCI and RSI were added manually for visual verification. As it is visible here the system generates quick scalp trades. The first trade would have been a loser and it probably might be a good idea not to enter when the EMA is flat. So a possible system modification might add a filter which only enters on rising/falling EMA for LONG/SHORT trades respectively. This would lead us into system development which is beyond the scope of this article.

If combined with other discretionary trading tools like support/resistance, trend lines and weekly/monthly pivots it might be possible to filter out more implausible trades (trading against the trend, hitting resistance/support or pivot points on the way).

P.S.: If you appreciate this article and the indicator, don't hesitate to hit the like button!
Thanks!