Community
Article contest
Riding the Price Action (part1) Trends and Sentiments
In my previous article series “The Hunt for Liquidity” I argued why traditional technical analysis tools are useless and even more – doomed to fail because these are targeted by market movers in the liquidity hunt process. In this series I will explain some price action reading insights that will help to predetermine upcoming movements.

Market sentiment. Often technical sentiment and fundamental sentiment differs, as technical correction is exactly the case, when price moves against the fundamental sentiment. Market sentiment from technical stand point represents the formal trend and it is one of the main aspects to consider when reading price action (further in the article – PA). Make no mistake, sentiment of retail traders and their ongoing exposure produced by various retail brokers have little to do with the formal sentiment. Basically – when higher high (further in the article - HH) is made or long time consolidation is broken to the upper side – sentiment changes to bullish and vise versa. It’s important to understand sentiment (or the formal trend) correctly, because according to the ongoing sentiment – PA must be read differently and different patterns must be look for.

When the sentiment changes or about to change – that’s where all the hard analytical work starts. And it doesn’t mean that if HH was created it will proceed further up necessarily. One has to look for both scenarios – bullish one (within formal sentiment) and counter-trend – the bearish. Counter-trend movements often are more volatile and steeper by angle as participants who aren’t in the trend – waiting for retracement to reach attractive risk-to-reward (further in the article R:R) conditions to trade – they don’t stay in the way of correction. In addition – the movement is strengthened by top-pickers and earlier position covering (short + short). Tricky part is to determine the exact turning point (see “small and deep corrections” section in this article).

The most difficult and important part is to fallow the story… Did you ever was late in to the move theater for like 10-20 min and then you struggle for entire move to catch up? Similarly in markets – have to fallow the story since the very beginning – where the last impulse is and where is it lead to. Were profits taken or not? Zoom out to the maximum and look at historical range – where is it going, what’s the main direction. And the most importantly – look for trading opportunities against the sentiment, but within main direction.

Correct understanding of a trend can be quite a difficult task and current over-bearish sentiment regarding EUR/USD pair is a perfect example. Often corrections of the trend enter in to wide and choppy consolidation periods. These slow periods of the trend should be traded with counter-trend positions (See figures: 1.0, 1.1) as these are more volatile – it takes quicker for profit targets to be reached and often – it gives a chance to trade same range for a several times, giving as much or even more potential to make profits than holding positions within the trend.

Counter-trend movements are surely difficult to predict, but with patience and tight risk-to-reward situations – these positions are no-brainers.

Figure 1.0. Sometimes more than half of the trend’s duration is dominated by the opposite movements. Such situations appear either when fundamentals contradicts technical developments or when both sentiments go together and “the crowd” is on the right side of the trend – market movers push against these sentiments to the limit.

Figure 1.1. When trend reaches oversold/overbought conditions (often around 75% mark of its future range), aggressive profit taking can lead to deep and prolonged corrections – challenging the trend and scaring crowd out of the sentiment.

Figure 2.0. In this example – “2” wave is a perfect example of how frustrating reading trend (and filtering separate wave) can be. After three consecutive waves, trend often ends up with deep correction or even start of a new trend. Choosing the right time frame can be challenging as it could reverse wave counting and highs/lows sequence upside down, but common sense comes to help when filtering out intraday noise and knee-jerk reactions to the news releases.

Corrections in the trend are either very minor or very deep ones. It’s quite easy to catch some little part of the retracement but very difficult is try to identify where the retracement will end and trend will continue. And it’s especially tricky and dangerous if trader wants to enter after missed the confirmed breakout or if technical sentiment started to shift towards ongoing movement. 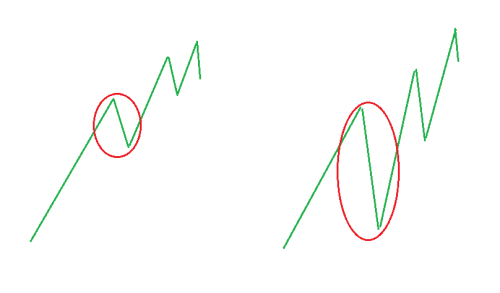 Small correction is more characteristic if breakout is happening after long time consolidation and it usually mean that targets are far away. Trading such correction is complicated unless one of the fallowing conditions met:
- target is far enough that R:R is still attractive even at the high of current range,
- there is a fresh impulse point nearby, below which is still possible to place tight Stop loss limit (20 pips or less). Often impulse points appear near or at lows/highs of the breakout session (most commonly - London or NY sessions). 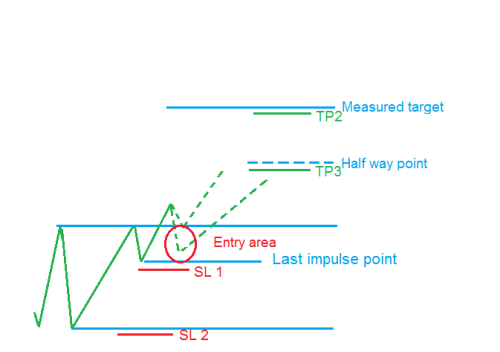 Deep correction is more common as after new high/low is created and new formal trend appeared – the correction is stronger when against the sentiment. Also, often it might be a sign that targets are close by – 150% of the range or closer.

Four different trends inside each other. Depending on the time frame one looks for – there is always a bigger trend which makes current trend a correction. Generally when starting from multi-year range and zooming down to a tick chart – one could identify almost infinitive amount of different trends inside each other. But it is possible to filter out the most essential developments using the rule of a four trends.

First trend is a general direction. The others technically are just one big correction of the second - corrective trend, but until outer boundaries of that correction are holding - these smaller trends inside are separate stories which could last for months and create a thousand-pip ranges. When these trends/corrections are filtered down to the third and forth ones (usually – weekly, daily or four hour time frame swings) – an acute observer may found out, that many errors start to occur in regards to respecting the highs/lows of the range or in other words – trend looses it’s consistency. So, the third and forth trends must be used to enter counter-trend position to target either - a continuation of the corrective (the second) trend or the very first one. See figures below: 5.1, 5.2, 5.3, 5.4.

Regarding this four trend counting rule – it’s important not to confuse the trend with a single wave/swing and with conventional wave counting approaches (like Elliot wave count, harmonic patterns and etc.), as every trend might contain a few or dozens of separate waves.

Figure 5.4. EUR/USD W1 time frame - four different trends inside huge correction. Currently it’s in the forth separate trend and it have plenty of room to go higher before meeting key levels.

Corrective ranges VS range of the trend. In trending or consolidating periods it is useful to fallow the ratio in between corrective ranges and total amount of the trend range. Often when distances traveled in counter-trend developments starts to overcome 50% mark of the total range – chances for continuation increases. On the other hand – in well trending environment, when trend significantly overshoots 50% of the amount of total retracements – probabilities for a correction to start - increases. Comparison of bull and bear ranges is especially helpful in prolonged consolidation periods, when it’s difficult to predetermine - is correction sufficient enough for trend to continue or not.

. Also, in the article “Picking Tops and Bottoms” I’m describing broader meaning of oversold/overbought conditions, which may help predetermine reversal points of the trend.

Ironically, thinking “outside of the box” and constant search for opposite scenarios to the most obvious ones – ends up with the true direction. Correct understand of the trend and the sentiment, with patience for tight risk opportunities - inevitably gives a shot for the ultimate trade.
Translate to English Show original Toggle Dropdown