If you have read some of my articles and/or comments, or watched the few webinars I've done, by now you probably know that I prefer a long term approach in my trading, and that I don't recommend day trading, especially to inexperienced traders.

It is a known fact that most retails traders use short time frames, and they have the opinion that long term trading is riskier, so they stick to their intraday charts believing that they are taking less risk. And this myth of the supposed safety of intraday trading is repeated ad infinitum until almost everyone believes in it. However, that's what it really is: a myth, nothing more than that.

No matter how long you hold your positions for, there is a fixed cost that is the same in all situations: the spread. And then there are commissions based in your trading volumes and capital deposited (using Dukascopy's fee structure).

Imagine that a currency pair has a total cost of 2 pips per order (spread + commissions). A day-trader will usually have small profit targets, lets say 20 pips. So he will pay 10% of his profits to the broker, and likewise his losses are also inflated by the spread. A medium/long term trader (keeping positions open from a few days to several weeks or more) may have a profit target of 200+ pips. The cost to trade is at the most 1% of his profits.

For the day-trader to make 200 pips he will need to pay 20 to the broker (and that's excluding slippage, which can make things very expensive!), and in the long run those costs will add up dramatically. In conclusion, all things being equal, an intraday trader will need to have a higher win rate compared to the long term trader, because the much higher trading costs will reduce the profit factor of his system.

Even though both lost 100 pips, in monetary terms the day-trader will lose much more, the position trader can trade smaller positions (while having the same profit potential) because the larger TP will compensate for the less leverage used. This should give you a good idea of just how risky intraday trading can be, one extreme price spike can ruin an account. 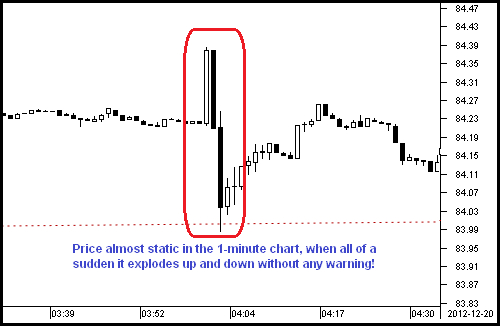 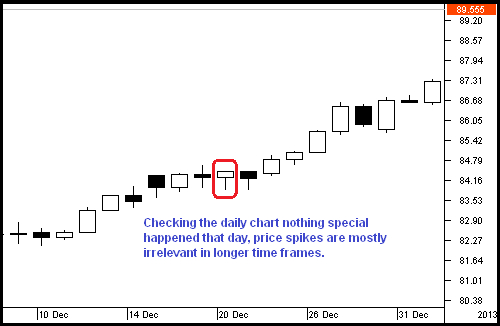 Even though both lost 100 pips, in monetary terms the day-trader will lose much more, the position trader can trade smaller positions (while having the same profit potential) because the larger TP will compensate for the less leverage used. This should give you a good idea of just how risky intraday trading can be, one extreme price spike can ruin an account.

This topic is the one that causes most confusion and leads many people to say that long term trading is riskier. Their logic goes like this: "an intraday trader risks 10 pips per trade, while the other one risks 100, so that is 10 times more money lost if the trade is negative!"

That's incorrect. If a trader uses larger stop-losses, he obviously has to adjust his position sizing to remain compatible with good money management practices, so he will trade smaller positions. The larger the SL the smaller the position should be, this is basic money management that all good position traders follow. This is also why keeping positions open overnight does not increase risk significantly (only on weekends) unlike most people think, the positions are small enough and have large SL to survive gaps and low liquidity. Price spikes during normal hours are far riskier to a day-trader.

But if the long-term trader uses less leverage will not that lower his profits? No, because one of the biggest advantages of using longer time frames is that you'll have more time to analyse and trade as many pairs as you wish, you don't have to be glued to the computer following all the ticks of a pair. So instead of having one big intraday position, you can have 10 small longer term positions, thus spreading the risk through 10 uncorrelated pairs, while keeping the profit potential intact. 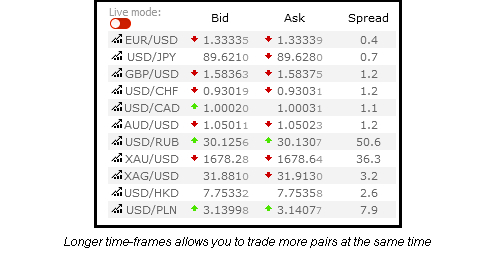 Almost all technical indicators, from the simple moving averages to the more complex Vortex Indicator (which I describe here), were developed taking daily charts into consideration. So by using them in smaller time frames you are not getting their full potential, due to reasons explained below.

The lower the time frame, the more random, wild and unpredictable the price action is, and this obviously makes trading much more difficult, because there's a big element of luck and uncertainty involved. For example, it just takes a major multinational company to be repatriating profits at a given time, for it to completely change the behavior of the market and create a temporary trend that will not have any sustainability. 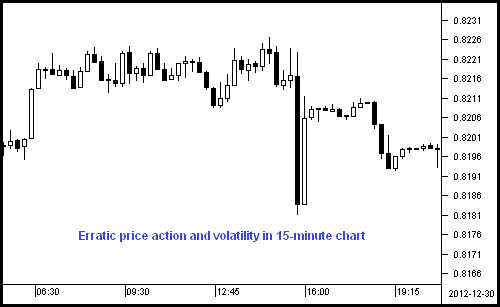 This trend will not be based on fundamentals or technicals, it will be a random and temporary event that could not have been predicted in any way. Such movements are mostly irrelevant in daily charts, where trends are cleaner, smoother and more logical. Compare a daily chart to a 5-minute chart of EUR/USD, the differences will be obvious in terms of different sizes of candles, spikes, gaps, and random "noise" in the shorter time frame. This is why technical indicators and support/resistance areas don't work as well.

Imagine that you're a day-trader following the markets, when all of a sudden your computer goes off and you can no longer know what's happening. A position trader would remain calm, because his trades last for several days/weeks, so he can afford to wait before opening a position or eventually close one if it is already in the market, the loss would not be significant. However, if you lose access to the market while day trading, it can have catastrophic consequences, it happened to me a few years ago when the electricity went off in a storm.

Emotionally speaking, day trading is very intense, extremely stressful, fast-paced and nerve wrecking. If your objective is to, one day, become a full-time trader imagine yourself after 10 years of this daily stressful routine, 10-12 hours a day. What may seem exciting and fun at first, will become torture as years go by and your nervous system gets damaged from all the ups and downs that intraday trading causes. You will eventually burn-out and become incapable of trading (assuming you're one of the few who can day-trade consistently for a long time). Don't overestimate your ability to sustain this routine for a long time. 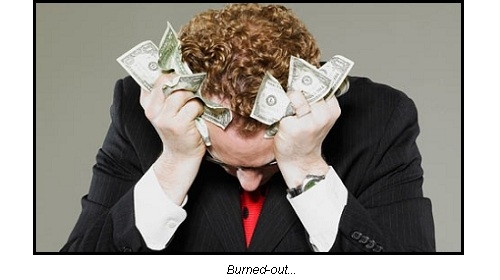 ► Do what the pros do

Excluding high frequency trading which is done by computers using arbitrage strategies not available to us mere mortals, due to technology restrictions, the vast majority of investment funds, hedge funds, CTAs (Commodity Trading Advisors) and professional independent traders do not use intraday time-frames. And we can safely assume that these institutions and traders know what they are doing and are profitable, otherwise they would be quickly out of business.

On the other hand, the vast majority of amateur retail traders prefer short-term trading (mostly because that's what the retail Forex industry "suggests" doing, ask yourself the reasons they may have to do this...) , and there have been studies done showing that 95% of retail traders lose money consistently, so they probably don't know what they are doing.

Who are you going to follow: the winning professionals or the losing amateurs?

Feel free to leave any comments you may have, whether you agree or disagree with the article.