Frequently released macro figures are good opportunity to show how you can take advantage of this kind of market events. Much is said about it, "do not play when the figures come", but why not take advantage of moves generated by them to open the next position or reconstruction of old? I am not talking about the entrance at the time of publication, but shortly after. Below I present it as a long position rebuilt, which was exited by my trailing stop (set slightly below the low of 7.30 GMT 06/03/11).

Case was happened 06/03/11. The default timeframe is M10. From about 12:00 polish time (10:00 GMT), we could see a clear phase of waiting for figures reading and only the necessary foreign exchange is being done. Well illustrated by the GMMA, which took in the period before the publication of a very compact and flat arrangement. I found that market is general uptrend (based on H1 and D1), quite clearly and in accordance with that, I manage opened positions and open only long positions in daytrading. At 14:30 (12:30 GMT), NFP, the unemployment rate and average hourly earnings has been published. All data were clearly negative for the dollar, which caused the initial shot in the top, of which I was happy. Then market dropped down and triggered my stop order placed so as not to give too much of a movement that "caught" before. Then there was a strong move up, when most people see only a "chaff" in the chart. 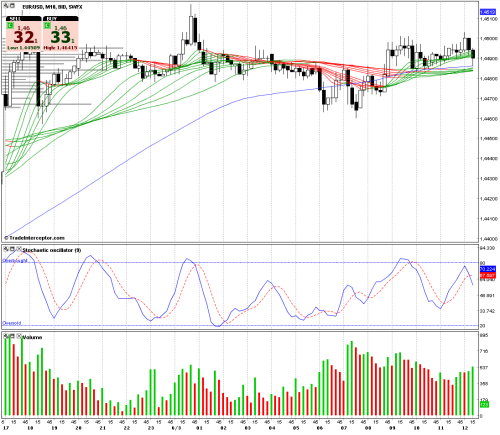 Chart 1, Picture of the market prior the figures, GMMA is flat, trend sideways, awaiting. 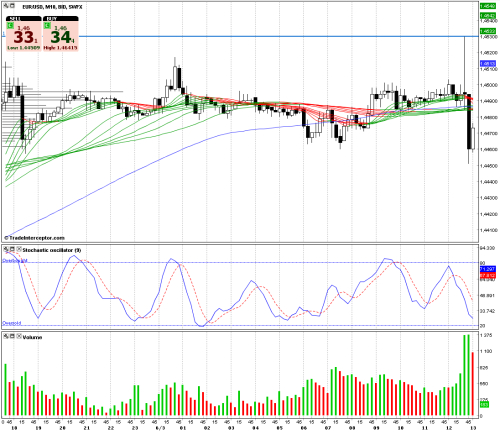 Such a operations I call market purge. Dealers, usually form large banks or hedge funds, generate movement in direction they wish open their positions to check the reaction of market. Then there is an attempt to move the exchange rate as low as you can, to ensure a favorable price as input in a proper motion. Sometimes this action is double, to confuse other players. Many of stop orders is hit and it encourages other traders to temporarily refrain from actions. Rightly, because this game is not worth its price unless you are a market maker (the real, not a broker MM). 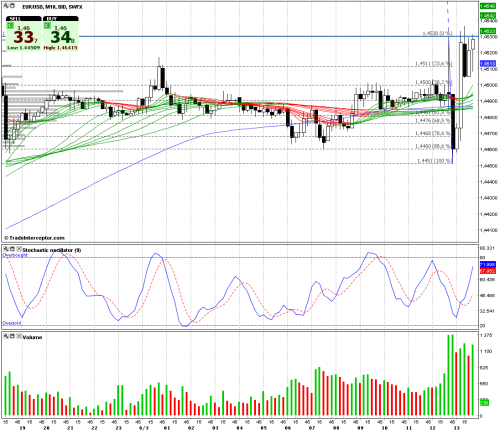 I have in my assumptions about the state of the EURUSD, a strong background view, which is flowing from both technical and behavioral analysis, that trend will be maintained in short run. Therefore, expecting a continuation of growth I decided to "renew" a long position, opening it again after breaking the high of the candle about 12:40 GMT. Input signal could be false, due to its sensitivity, but the direction was consistent with my expectations, so I was ready to take on this. The only question is where to set stop-loss at the beginning? At the local bottom? It's almost 80 pips, too much for me. One of my tricks to improve the price of stop orders is to use 78.6% retracement of last swing. So entry @ 45305, stop @ 4469 (a total of 61.5 pips), which is still a considerable amount. Why 78.6%? For now, must be sufficient so that it works better than 61.8%.

After price went above the 4550, stop-loss had been moved below the pullback low after the test of price 4530, i.e. at the level of 4503. Trend continued, we know what happened, price went only to 4690. My analysis has shown that a good time to exit the position, might have been slightly upper than achived levels. 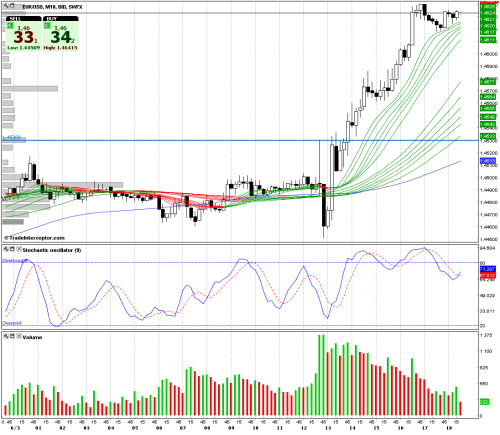 Why I write about all this? I believe that this is a pretty good example to show that after hitting the stop-loss of existing and earning position, during the publication of figures, does not necessarily mean that either the broader set stop orders, or just observation the movement. You can use it pretty well, although my re-entry was far from ideal. Besides, it is some useful trader talk.