Post Inauguration of President Donald Trump :
After watching President Trump’s inauguration, his speech, then first visit to the CIA headquarters as the 45th President of the United States of America and his speech there while massive protest (estimated at some 1.5m mostly American women across the nation and many more in other parts of the world) were going on, I have lots of questions as to how, what, and where President Trump will take America. 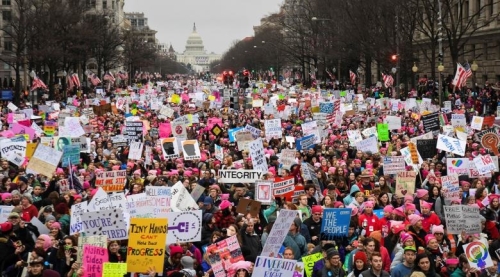 Let’s jump to the mass protest and fiery speeches by some Democrat Politicians to the crowd. All I can say to these Democrats is:

Who was running the United States of America before Republican President Donald Trump took office? All these many problems (both in the U.S & the world) and social ills highlighted by them didn’t happen overnight and which should have been addressed and, perhaps, rectified while the Democratic Presidents were in power. To me, their anti-Trump speeches sound very hypocritical and downright ridiculous.

For those “Woman power” protestors, well, where were you voters during the election? If you all had turned out to vote, Hillary Clinton would have been the 45th President of the U.S.A.
Equal pay and working conditions for women has been an issue for donkey-years. Why stage a nationwide protest & demands when the new President was sworn into office barely 24 hours? The American women should have held mass protest and demands for more “rights” when Obama was still in office because he obviously failed the women in American and did not deliver very much on his “Yes, we can” election pledges.

One of the news commentators on TV network had said that “Trump probably would like to ask to meet a dozen of these women protesters and ask them exactly what they want. But, as President, he can’t do that anymore”. And I said to myself: “If I am Trump, I would ask “Why can’t I not do that? I am the President of the U.S.A and the commander in chief of the most powerful nation on Earth. So why can’t I not ask to meet the women protesters?”. I would ask the numbers to be narrowed down to 6 women representatives to have one-on-one with me, ask for a list of their demands, and then reassured them that I, as the American people’s President, will draft and propose bills & amendments to the Senate & Congress. I will also assure them that I will name any Politicians (Democrat or Republican) who would not support these bills & amendments so that the women’s groups can make sure these politicians do not get re-elected into office. That way, the women’s groups will become my public army against any politicians in the Senate & Congress who are against my policies.

For those proclaiming that Trump is not their President, well, whether the American people like it or not, President Trump was duly elected into office in accordance to the U.S.A constitution and democratic process and, as such, is and will be the President of the U.S.A for the next four years.

What’s the direction of the United States of American under President Donald Trump? 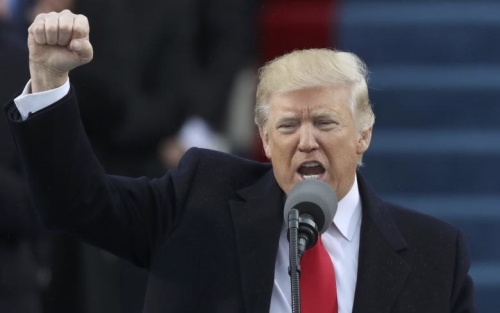 We will make America great again!

But just how is President Trump plan to go about doing that?

Will that be through trade protectionism and starting a trade war with China & other nations by imposing higher tariffs on imports, deport illegal immigrants and close America to Hispanic & Muslim immigrants, withdraw from trade agreements (notably the North American Free Trade Agreement or NAFTA, and the 12-nation Trans-Pacific Partnership (TPP) trade pact), play a lesser role in NATO, , build a long wall between Mexico & the U.S borders, etc, etc.

By doing all that and more, will that make America great again?

Whatever the outcome of these actions if some or all of them are followed through, for me that is reminiscence of China closing her doors to the world back during the Ming dynasty which will be very, very bad, not only for the U.S, but for the world’s economy.
As the President of China Xi Jinping had stated recently in DAVOS, nobody will win in a trade war and President Trump should take note of that.

Whatever and wherever direction the 45th President of the U.S.A will take the country and the world, it will either be a most fantastic & fabulous OR a most terrifying & dangerous four years of his Presidency.
However, personally, I think the unconventional President Trump might turn out to be a great, if not the greatest President that the U.S.A and the world have seen.
His first 100 days in office will show us just what type of person he is made of and the president he will become.

For the Forex Market, the question would obviously be:
How will the USD hold up against other currencies?

Since nobody know exactly what President Trump will do next, the answer will come in the first 100 days of President Trump’s presidency and how much he will and can deliver on his election promises to the American people.

WHAT WENT THROUGH MY MIND WHILE WATCHING THE INAUGURATION

These are made up by me while watching the inauguration process : 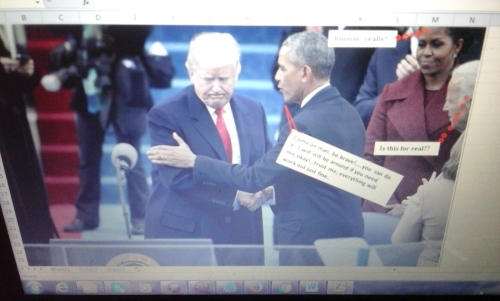 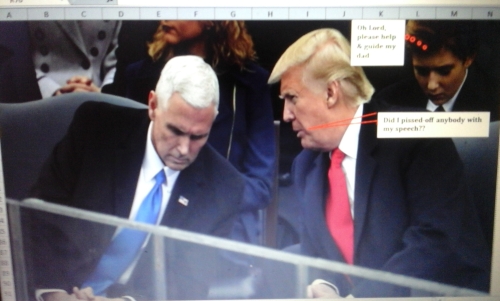 God bless & help America because we will need all the help that we can get!
Translate to English Show original Toggle Dropdown