Community
Article contest
Picking Tops and Bottoms
While surfing through various educational material on the internet, I noticed that many urges to avoid picking tops and bottoms as it seems to them to be a very risky thing to do. However, I often do quite the opposite and many experienced traders that I know of do the same.
So what could possibly be wrong with the concept of “Buy low and sell high“? Probably the biggest problem is that you may not know how high or how low it still can go and because of that it is difficult to determine possible risk limitations.
But here is the thing; those investors/participants, who entered at the very beginning of the move or at the break of the last support/resistance must take profits somewhere. These technical levels, where they are planning to take their profits, will be a turning point. If not for a reversal then at least for a relief movement (rally/retracement). That should be a significant enough move for a chance at a decent trade.
So how does one determine where they plan to take their profits?
First of all don’t forget that neither the top/bottom picker nor the one that is already in the trade is ever absolutely sure where the next possible turn is and as one of them is eager to enter, another is eager to exit at the best possible point.
Let’s look at these general categories that principles of picking tops and bottoms can be placed in:
Oversold/Overbought conditions, Risk and Money management.
It’s good to start from the universal rule of markets: middles are always met. This is derived from the assumption that the middle is the equilibrium between supply and demand. All that said, it is logical to assume that range of the present is only 50% percent of future range, or future range will be only 50% of the present range.
Overbought/Oversold
Basically these extremes (where both participants are eager to trade) can be called overbought/oversold conditions. And here comes the most wrong assumption of the latest FX preaching, that overbought/oversold situation is determined by indicators which shows a green or red line to indicate the overbought or oversold level. Of course deviations from dynamic TA averages can give clues about the statistical degree of overbought and oversold conditions, but in my view this term includes much more than that.
To define overbought/oversold conditions comprehensively let’s put it in three general categories. It can be one of them, a few or altogether: simple math, price action (PA) patterns and psychology (both from individual‘s perspective and perspective of the masses).
Simple math: Because of universal law of supply / demand and equilibrium in the middle, every swing/range that has broken the previous one is targeting 200 % extension of the previous one.
The very same principle plays a part in person's psychology too. Do you consider selling your property at double the price you paid, or receiving a 50% promo discount on your favorite goods or services a good deal? Probably yes.
Overbought/Oversold situation from a psychological perspective is the top where no one wants to buy anymore or the bottom at which no body is willing to sell anymore. It is highly subjective of course, but it doesn’t require any accuracy.
This perspective must be viewed as an extreme condition. A trader must assume that his view/expectation of extreme, or the place where he is surely not willing to buy/sell anymore, is just the middle of the real extreme! It’s a sneaky way of finding himself in the statistics. Never expect to be the one at the very top or very bottom of a 100% range. (Remember that 95% of FX newcomers end up losing their initial capital). Presumably, the ones with most extreme expectations are participants who trade the larger time frames. For example, if trader analyses a daily or weekly chart, than he should try to imagine where these extremes are from perspective of an investor who just moves his assets one or two times a year.
Of course, all time highs always act strongly psychologically and (again) if these highs are twice as high as historic range, or one from a significant period (last year, etc.), it is in overbought/oversold condition and potential for further movement is limited.
Because of the psychology of masses, levels that are visible for everyone are never the strongest ones because around visible levels (tops, bottoms), limit orders are starting to accumulate and decrease the imbalance of supply and demand. That’s why it is very important to take partial profits very early after the first touch. After price reacts to the level, a new wave of participants jump in and trade it.
Due to psychological factors, price always reacts to round numbers one way or another. Such round numbers include the static numbers such as 1.5000, 1.4500 and the dynamic round numbers in which length of the range/swing is measured, like 100 pip range, or 200 pip, 1000, etc.
From a price action perspective, the steeper the run is, the bigger the relief will be. In order to gather momentum, price needs liquidity that fallows it. So in other words, for every bull candle or a few, it needs to get some bear candles too. Generally, from PA perspective, oversold/overbought conditions start to appear when the angle of price movement increases above 70-75 degrees or/and becomes a parabolic (exponentially increasing) shape.
Look at small changes in momentum in PA. It’s impossible to tell directly from the PA. Was it a massive closing of existing positions, or new wave of orders coming in? Context helps to determine this. It’s important where these momentum changes happen, such as at the extreme highs. Were the ultimate targets reached? 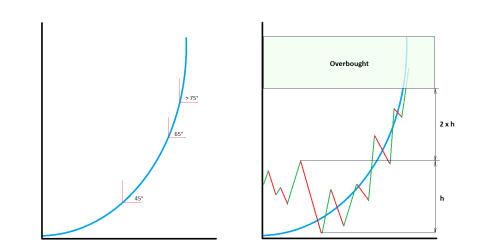 When the angle of price movement starts to rise above 70-75 degrees, movement becomes unsustainable and doesn’t last long. Preferably, steepness of the movement should be measured from a formation of at least 4-5 candles. Formations should not include consolidation ranges inside them.

Daily chart of USD/JPY pair. Bull swing that broke important resistance, produced its targets above yearly highs. Considering that the movement happened without notable retracements, reached 200 % extension of breakout swing and broke yearly highs and most notable trend channel, it is good point for bulls to take some of the profits.

Other key mistakes that traders make while picking tops and bottoms is that they try to enter/settle full sized position trades at the very first touch of the technical level (or even worse – after price has already reversed direction) and wait for their longer term profit targets to be reached.

The point is that price often comes back to retest these levels as previous participants rarely close all their positions at the same level and because after reaction to a technical level, new participants jump in. Furthermore, every retest may lead to trigger stop limit entries at break-even point or even lead to a breakout of the technical level.

The best approach in this situation (in my view) is to partially scalp first touch and leaving the rest for later. I never overdo with tightness of stop loss limits because it’s really healthy to leave a few pips above the very top for second retest; which may happen inevitably.

In cases where price starts to creep above the recent high (and my entry point) I prefer to wait for a H1, H4 or session close. Only if PA of the new period breaks the highs of the previous period (third or fourth attempt to move higher),I would close my trade for a small loss. That’s why I don’t use SL limits at my entry point (at least at very beginning of the trade), because further PA intentions are not yet known. If stopped out, at least you should know that you were wrong about this technical level and your loss is the price of knowing it. With that knowledge you either can trade immediately in the opposite direction or wait for the next (further) level to trade, which should give even better chances in your favor.

I noticed that often newcomers wrongly assume that they must position themselves as either only longer term position/swing traders or short term/intraday scalpers. That is a big problem which leads to a failure to be able to adopt your strategy depending on the situation in the markets.

When asked about their trading style, many experienced traders will tell that they just take from the market what they can, and there’s nothing wrong to sometimes be a little bit of both; long term and scalper. This is especially true when trying to pick tops and bottoms, where early profit taking is just a necessary tool to reduce your risk exposure.