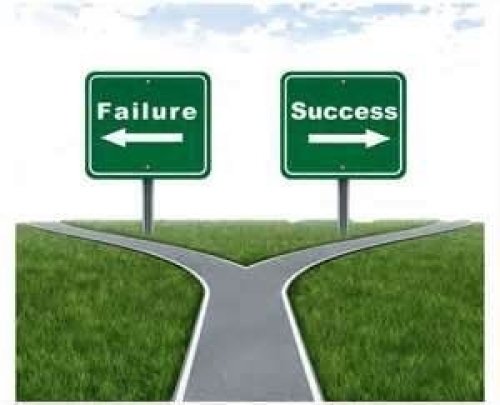 "The path to success is to take massive, determined action"

Every day hundreds of new traders are attracted to forex market and embark on their journey to fulfill their dream of financial independence. Their goal is to become consistent profitable traders, but very few are able to accomplish it. There are many reasons that leads to their failure, but the most common ones are lack of patience & discipline, fear of failure, being too greedy, poor risk / trade management etc.
There are three reasons to write this article, number one is of course to win some prize money.
The second one is to summarize my trading experience and share thoughts that helped me immensely in my transformation from being a losing trader to a winning trader. Although, I am not yet in the league of consistent profitable trader, but I am satisfied with my progress. I firmly believe that trading is a journey of self measure and self improvement and a personal battle to do what we know is right versus what we want to.
The third and most important reason is to help fellow retail traders understand some important aspects of trading, which they think is not that important because their focus is so much on finding a holy grail system with highest win rate or highest risk to reward ratio etc. and as such they tend to ignore these basic things, which could lead them to consistent profit and enhance their trading and take it to next level. So let's get started:
1. Patience & Discipline:
"It's not the mathematical skill that's critical to winning, it's the patience & discipline of being able to stick to the system"

In my opinion, the number one reason a novice retail trader fail to become consistently profitable is due to lack of discipline to follow a trade plan. It often happens, when the market is not behaving according to their expectation, they become impatient and take trades out of frustration and deviate from their trade plan.

Perhaps this lack of patience & discipline arises from the fact that they get carried away with volatile price movements and when they see other traders posting their winning trades on trading forums, it hurts their ego and they think that they missed the boat and jump in the water without a thought, which only leads to failure.

Moreover, some traders also become impatient and over trade because they don't have sufficient capital to start with, as such they get itchy and often take mediocre trade setups when there is no proper trading signal according to their trade plan in fear that they might miss a move.
The most important thing a trader has to learn is when not to trade. It is not only when the markets are overly quiet or nasty whipsaws, but when they are having mental whipsaws. In other words, when they are taking irrational and illogical trades contrary to their trade plan. When they are trading to be right and win every trade to satisfy their ego, instead of trading to be profitable. If their mind is not in subjection to their reason, mistakes will be made. Sometimes, I fail to understand why traders find it so hard to do what is in their own best interest.


2. Thinking in Probabilities:
"When you really believe that trading is simply a probability game, concepts like right and wrong or win or lose no longer have the same significance"

Forex trading forums are common place where retail forex traders post their price chart with technical analysis and justification for their trades. Out of these trades some trades end up in profit and some in losses. When these traders experience a losing trade then they somewhat doubt their analysis and often post charts with a query "Why my trade failed" as if they are expecting every trade to be profitable.

One of the major obstacle a novice retail trader face is they give too much importance to an individual trade and get upset or excited after couple of winners or losers and doubt their ability and change their trade plan too often.
They fail to understand that trading is game of probabilities. Even the best traders have losing trades, but they know their edge and understand, if they follow their trade plan and if same scenario is repeated numerous time it will give them a positive outcome over a longer period.

So instead of asking someone else opinion, a trader need to ask himself/herself the ultimate question viz. If I take this trade 50 or 100 times will it give me a positive outcome in the long run. Once you start thinking in probabilities, it will change your perspective and eventually you will see positive progress in your trading.

3. Illogical Stop Loss Placement:
"Trading is not a business of predicting, it is a business that involves hypothesizing and risk management"

It is common practice among novice retail traders to use needlessly wide stop loss due to fear of taking a loss and preserving their win/loss ratio. This fear is commonly caused by lack of knowledge and due to insufficient research and back testing. They don't understand that losses happen and they are part of this business and that there is no place for fear, if you want to be a successful trader.

Professional traders understand this aspect and doesn't use arbitrary stop loss such as 30, 50 or 100 pips. Instead they place their stop loss at a price level which, if reached determines that a setup is invalidated and the price is very likely to continue to move against their analysis. Usually these price levels are established support/resistance or supply/demand zones closer to entry price because these are the zones where banks, hedge funds and smart money place their stop loss. Once a trader starts thinking in terms of long term profit expectancy and not thinking about win rate he/she will realize the difference.
Let me explain, what I meant by long term profit expectancy, since very few novice retail traders understand the importance of long term profit expectancy (PE) = (probability of winning trade * average size of winner) - (probability of losing trade * average size of loss).
For example out of 100 trades taken your win rate is 60% and average winner is 1.2R (in terms of risk to reward ratio) and your loss rate is 40% and average loser is 0.9R, so your long term profit expectancy is 0.36R per trade. 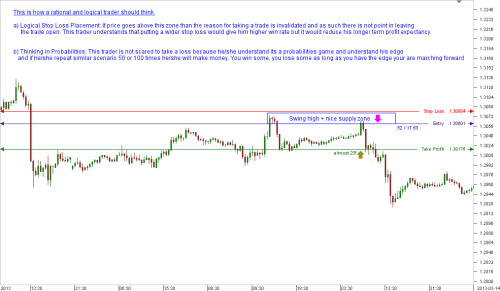 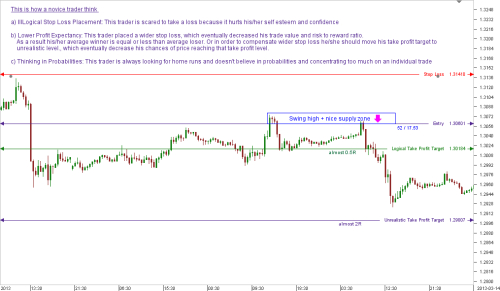 4. Understanding Price Chart:
"Trading is not about markets; it's about thinking"
Majority of novice retail traders do technical analysis and use price and time chart to execute their trades. Each trader have their own interpretation of price movements they see on price chart and use different tools or indicators such as moving averages, fibonacci, trend line, gann, support/resistance, supply/demand etc. to execute their trades.
There is one very important aspect of technical analysis which retail traders lack, why and how price move ? A candlestick, bar or line we see on price chart represent orders that are already filled and market will move up or down in direction of unfilled orders, where more stack of orders are piled up. That is why we see market movements in waves a lot viz. an impulsive move then a corrective move. Price often retrace back or take a breather because in order to move in the impulsive direction it needs more orders, as such it retrace at a level where there are unfilled orders left initially plus new buy/sell orders coming in at that price level.
Ever wonder how many times we enter a trade after noticing a substantial move expecting price to go further in our direction, but instead it retraces back and hit our stop loss and eventually continue in the original direction and we hope that if only we would have our stop loss a little above or below that level. The reason it happens often because there are not enough orders at that level for market to move further in the initial direction and as such it retraces back to a level where smart money viz. major market participants such as hedge funds, institutional traders, banks and experienced retail traders are waiting to buy/sell at discounted price (wholesale price) and make profit.
A retail trader need to understand that it's the big boys that moves price and our job is to identify where they are likely to take their position and trade accordingly. We may not be always right, but if we are swimming with the tides we will survive longer than if we are swimming against the tide. One of the way to identify where the big boys were active in past is by way of looking at Supply/Demand and Support/Resistance level. 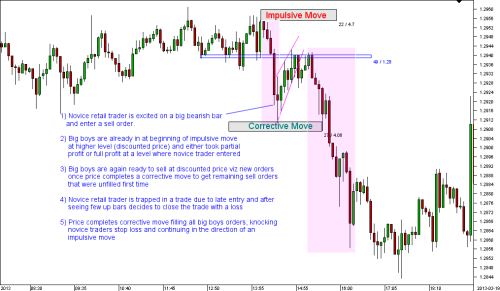 Due to text limitation, I will explain remaining points in my next article.
"What's important isn't what you know, but what you do with what you know"