Community
Article contest
Options as a Sentiment Indicator
Many indicators gauge market and investor sentiment; but few are as robust as they possibly could be. Most of the indicators look at the balance of trades on order books, and some look at put-call ratios in the options market; but, most of them gauge a ratio or number without any context as to the actual intention of the trader. The indicator tested for this research has sought to more accurately explain the ratio of buys and sells in the options market of the underlying index. This indicator has proven to show tendencies for price activity of the Euro to go above or below key price levels, depending on up or down consensus measured in the options market.

One major indicator, the traditional put-call ratio, simply sums up and calculates all of the puts and all of the calls as a ratio. This has been criticized for being too crude of a method for gauging market sentiment, since the summation of the open interest is assumed to be long only. Assuming all the options are bought to open—a lot of them could be sold to open—results in a different sentiment entirely. A put-call ratio of 0.75 means the options market is bullish on the underlying stock, but this isn’t necessarily true. If, for example, there were three puts for every four call options traded. If all of the puts were bought outright (i.e. purchased as portfolio insurance), but only one of the four call options were bought outright, while the rest were sold to open—in other words, the trader wrote the call options instead of buying them (i.e. buy-write for portfolio income)—then the true put-call ratio would actually be four. This implies bearish sentiment, not bullish. So, not only is the numerical value false, it is giving the completely wrong signal!

Understanding this simple dilemma makes it easy to see the shortcomings of the traditional put-call ratio. One of the biggest progressions from this has been calculating a long-only put-call ratio, which has been established and made available by the International Securities Exchange. This put-call ratio—better known as the ISEE sentiment indicator includes long-only options in the ratio, alleviating the stated dilemma.

In the example we had a put-call ratio go from 0.75 to 2.33—a wildly different result—just by considering the long only options. Three of the call options were left out of the equation due to their being call writes, and not outright buys. This gives all of the say to 57% of the total volume, which means, the long only ratio can only explain 57% of the data. This is yet another shortcoming.

A proprietary trading strategy implementing the options sentiment indicator seeks to explain all of the open interest of the trading volume, whether the options are buy or write. This way, 100% of the data can potentially be explained when measuring market sentiment as a binary. When analyzing the data, factored by each component—for instance, buy to open, or sell to open—the statistical tests have previously shown that each component provided more value to the overall ratio computed. In other words, the long only put-call ratio explains less of the overall market sentiment, and the traditional put-call ratio explains even less.

Note also, there still may be a loss of context for the trade data gathered, despite there being potential for a 100% explanation of the options data, not all of it has a simple rationale. For example, a wirehouse firm may place a large put order in the options market, underlying a greater intention to buy in the spot market. In other words, their options trade feigns a negative sentiment; when actually they are bullish.

Here is a chart showing two years of profit and losses when backtesting the sentiment indicator for the Euro: 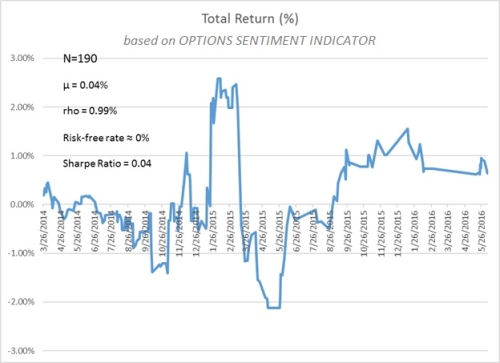 If you notice, the portfolio statistics are listed on the graph as well, out of a sample size of 190 trades since '14, the trading strategy produced an average return of 0.04% and a Sharpe ratio of 0.04, assuming a risk-free rate of 0%. The graph speaks for itself, the results produce an above-average return given the hit rate (winning percentage) of all the trades were a little above 50%, still producing a raw equity graph. These results do not have any stop losses or profit taking, simply open-close daily natural log returns.

And here is an equity graph for the trading strategy since May 2016: 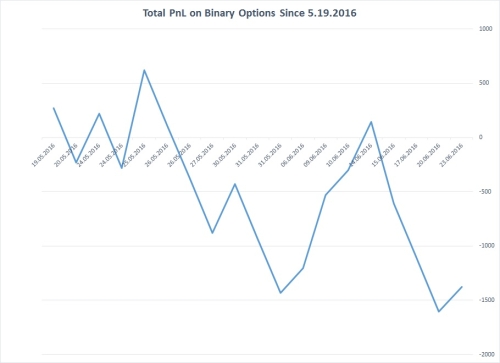 Note, the graph depicts a total of all the trades produced by the sentiment indicator since 5.19.2016, all trades focus on the EUR/USD. Out of 19 trades, it managed to win 9 of them; so a hit rate of 47%, so far. Obviously, it's performing below average, which invariably means I expect to perform above average, all else remaining equal. The question would be how well will the equity graph look when it's going above average in the plus 55-65% winning percentage range. A lot of these trades are wagered on confidence, so out of the $1,000 daily margin provided by Dukascopy, a single trade may be $250-500 in risk capital, if the overall outlook is reinforcing the indicator bias, then maybe $500-1000 in risk capital. The idea, of course, is to be confident when there is a greater likelihood of winning, and less confident when the underlying news and analysis is proving that the bias generated by the sentiment indicator is unsubstantiated.
Translate to English Show original Toggle Dropdown