A negative interest rate policy is an unconventional monetary policy tool employed by Central Banks where the nominal interest rate is below zero hence the term negative. It is unconventional because instead of the depositors earning money for their deposits in Banks, the depositors are charged for their deposits in the banks. Negative interest rate do not directly impact small investors but can indirectly have effect from the spillover of banks having deposits at other big banks/central banks.

The policy of negative interest rate is employed when the central bank observes in its economy of the following :
Central Bank’s policy aim is to make people and businesses to spend and invest money instead of keeping money at the bank and to stop prices from falling, increase real production and output, and decrease of unemployment. Such loose and expansionary monetary policy is employed usually to deal with such stagnation in the economy.

When a Central Bank has set a negative interest rate, it means depositor will be charged for keeping their money at central Bank or possibly at private Banks. Central Bank’s intention is to encourage Banks to lend more freely to businesses and individuals to invest, spend and lend money rather than hoard or keep money at Banks as safekeeping.

Swiss National Bank currently charges -0.75% for keeping money at its banks to counter currency appreciation to the many investors from around the world fleeing from their own countries banks.

In 2014, the European Central Bank (ECB) instituted a negative interest rate that are applied to bank deposits to prevent Eurozone from falling to deflation. ECB’s Interest Rate is currently -0.30%.

There is speculation that USA’s FED also might employ negative interest rate policy in the near future following other major economies viz, Eurozone and Japan.

European Central Bank became the first major economy to use negative interest rate policy 1 ½ years ago. It now charges 0.3% to their cash overnight. ECB started the negative interest policy in conjunction with Quantitative Easing with bond buying program. The effect of these ECB’s actions has been in weakening of Euro. Against US dollar, EURUSD pair has weaken from around 1.4 around the start of these ECB actions to present 1.1. The pair could test parity around the end of 2016. 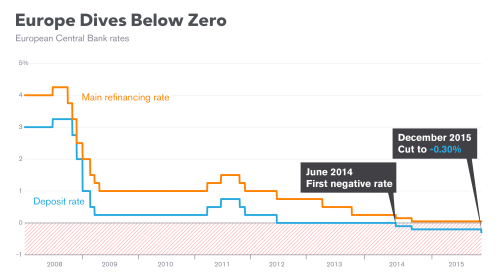 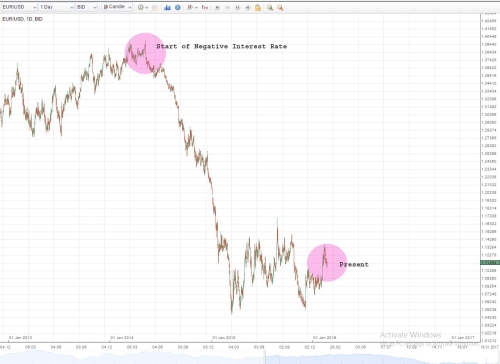 Bank of Japan surprised the market on Jan 29,2016 when it cut Interest rate to -0.10% to start its own negative interest rate policy after a prolong near zero interest rate. The immediate effect was weakening of JPY. USDJPY went from around 117 to 121 within hours. But because of current risk-off and volatile economic climate, JPY is taken as safe haven and JPY recovered. USDJPY currently trades at around 113. 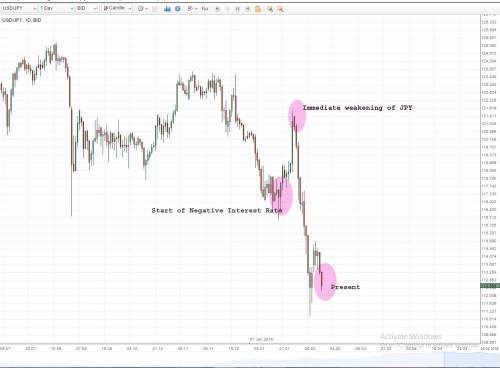