As we know the mother of all fundamentals is the NFP or Non-Farm
Payroll is an influential statistic and economic indicator released monthly by the United
States Department of Labor as part of a
comprehensive report on the state of the labor
market. The figure released is the change in nonfarm payrolls (NFP),
compared to the previous month, The NFP figures represents the number of jobs
added or lost in the United states over the last month, except the jobs relating
to the farming industry.

Importance and Interpretation for the Financial Markets

While the overall number of jobs added or lost
in the economy is obviously an important current indicator of what the economic
situation is, the report also includes several other pieces of data that can
move financial markets:


1. Unemployment rate in the economy as a
percentage of the overall workforce.
This is an important part of the report as the no. of people
out of work is a good indication of the overall health of the economy and this
is a number that is watched by the Federal Bank. When unemployment becomes low,
inflation is expected to start to increase as businesses have to pay high to
hire good workers and increase prices as a result. This rise in prices may leads
to workers demanding higher wages especially when the economy reaches full employment which leads to further
inflation

2. Sectors with increase or decrease in jobs: This can give traders an opportunity on which sectors of the
economy may be primed for growth as companies in those sectors add jobs and may
use those sectors for investment purpose.

3. Average hourly earnings. This is an important component because if the same number of
people are employed but are earning more or less money for that work, this has
basically the same effect as if people had been added or subtracted from the
labor force.

4. Revisions of previous nonfarm payrolls
releases. An important component
of the report which can move markets as traders re-price growth expectations
based on the revision to the previous number. 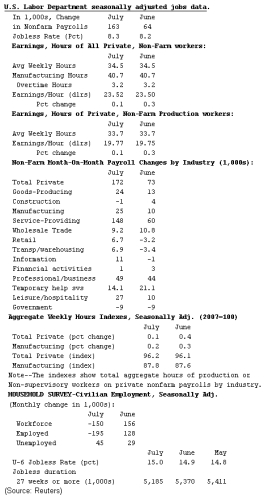 The NFP report for
July said that 163,000 jobs were created, which is way above the street expectation of 100,000. The unemployment rate
came in worse than expected at 8.3%, the expectations were for no change of the
8.2% number.  while the number of new non-farm payroll jobs for June was lowered from 80,000 to 64,000, casting doubts on the health of the economy. But private payrolls which exclude government jobs rose by a
whooping 172k, lot better then the expected 110k. Bernanke has previous said
that a monthly payroll growth of about 100k is needed to keep the jobless rate
stable, while growth of roughly 150k to 200k is needed to lower unemployment.

The initial reaction
to the report was very muted, with EUR/USD corrected for some time on the news but started gaining after the US stock markets opened, but Japanese Yen lost to USD. Analysts expected the dollar to strengthen on haven demand if payroll figures were much lower than expected. But the currency was tipped to rise if the figures were much higher, as signs of a stronger economy would lessen the case for more Fed monetary easing.

Let’s try to understand the trend in major pairs for the
coming days. 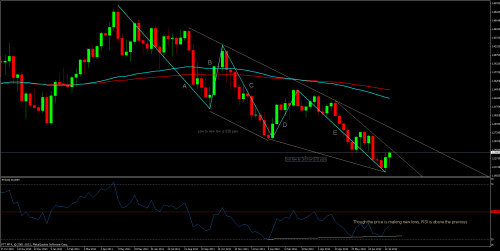 On a weekly chart I am turning out to be a little bullish because
of the reasons, 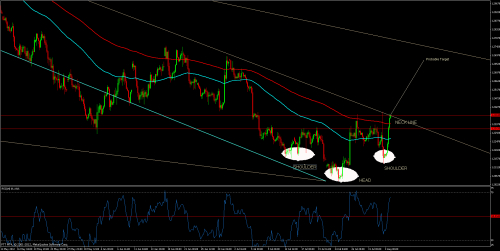 4 hour chart indicates that there is an Inverse Head and
Shoulder pattern and it’s closed at the the neck level. A strong break above
the recent high or 1.24 will take the pair to the next previous high of 1.2660
ranges which is also the 260 pips movement on the way from neck to head zone. 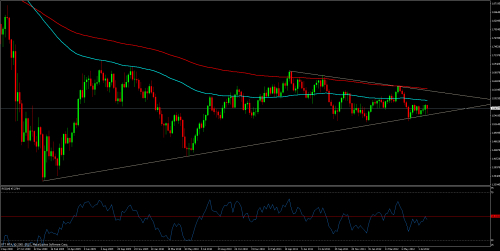 Pound is still respecting the
higher low trend line with 200 EMA acting as a strong resistance on a weekly
chart.  It is currently stuck in a
symmetric triangle with 1.5350 zone acting as strong support and 200 EMA and
the lower high trend line zone as resistance.

RSI is in a no trade zone with
previous week’s high acting as mid zone resistance. 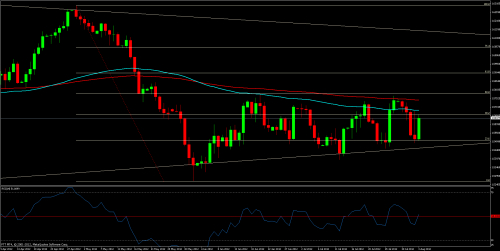 On a daily chart again pound is
facing stiff resistance at 200 as well as 100 EMA.

Fibonacci retracement of 50%
zone is very vital resistance and with 23.6% as support.

For the past 2 month’s it’s in
such a side ways that, with proper leverage a trader can simply buy or sell the
pair with out any analysis yet can end up booking profit. While a lot of
scalpers get big gains in this type of market, it will really test those who
prefer swing trades.

In my opinion, unless there is
a strong fundamental reason for the pair, we will continue to witness the
sideways movement for some more time with 1.5450 zone as support. 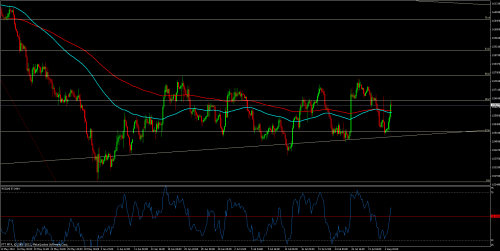 The 4 hour chart is a text book
move for RSI with RSI oversold zone as support and over bought zone as
resistance. Well, I prefer not to analyse this pair on a 4 hour chart.

The trading levels advised for
the week beginning Sunday, August 05, 2012 the previous week’s close of 1.5630
should be watched very carefully to open any positions. As long as the pound
trades above that we may witness 1.575, 1.5875 and 1.5999 and we advise the
bears will be stronger till 1.55 and 1.5373 if pounds starts trading below the
weekly close.

Does your analysis give you different projections? If yes, please share it with me as it will help me too. Please share your opinion.