The hardest part of trading is waiting for the right setup. Sometimes it might take days to get the right conditions that make you comfortable in taking a trade. That’s what happened to me during the last trading week of July 2013 with the GBPJPY pair.

My plan for the week (22nd – 26th) was to get a trade with the lowest risk possible and highest reward potential. I am drawn to the Japanese yen pairs because of their high volatility. It was either the GBPJPY or the EURJPY, I chose the GBPJPY because it is more volatile than the EURJPY.

The first thing I noticed about the GBPJPY was the fact that the pair was caught in a range, with resistance around 153.3 and support around 152.4 as you can see from the chart below. My best bet would be to trade a break out from that range.

The four-hour chart at the time was not very helpful either, the conclusion was the same, the pair was ranging.

On the 24th of July, price broke out of that range and I prepared to launch my long trade. The break out occurred before the U.S session, so I waited for the U.S session to take my trade.

Before the U.S markets opened, the pair had dropped back down towards the resistance area and then gradually made its way up. The momentum was not impressive, so I decided to wait and go long if it made new highs. 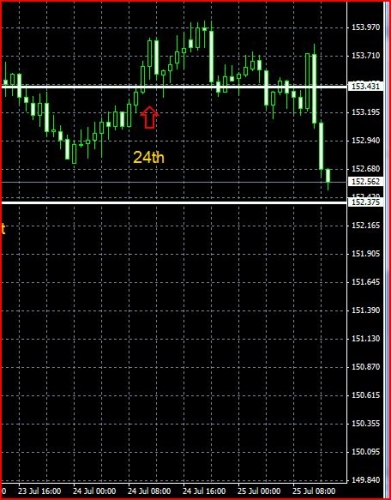 After a rejection from that high, my first instinct was to short the pair. But I could not be sure that it would not bounce from the resistance and head higher, so I kept my finger off the trigger.

My entry signal came off the M15 chart, when price broke the supporting trend line.

It was not a straight drop, there was a test of the trendline; then it happened…….Price will always respect support and resistance levels, and its subsequent reaction around these areas can give a strong indication of the "next" possible direction.

My first target was the previous support; I never stayed on that long. At 152.68, price stalled briefly, and I jumped ship.

My point is rather simple, I made about 68pips from that trade, could have made more. Support and resistance areas are crucial to note. Good trades are the ones you have to wait for; the more planning and discipline you invest in a trade, the better the outcome.