Community
Article contest
My Profitable Trade Strategy.
Introduction
In my loss making days I experiment with different trading strategies to bring me back in profit and this approach has helped me develop some trading styles which are quite reliable to bring decent profit while keeping the risk low. In this article I'll share one of such trading strategy which takes only 2 % risk of capital allocated for any individual trade and still manages to bring in return of more than 20 % (annualized). Also you don't have to worry about a string of continuous losses wiping account clean with 2% at a time as on average it does fewer than three trades in a month.

Idea in Nutshell
So I hope you would eager to get into details of it without any further delay. It's developed using the combination involving EMA of 10 candle period and EMA of 20 twenty candle period. It basically tries to identify the direction of trend of underlying instrument and then gauge the relative strength of that trend. It has been designed such that it is supposed to avoid taking trades in days of narrow sideways movement and trade only when there is a strong price action on a particular side caused by any fundamental or technical factors. So let's look into the design aspect of it. 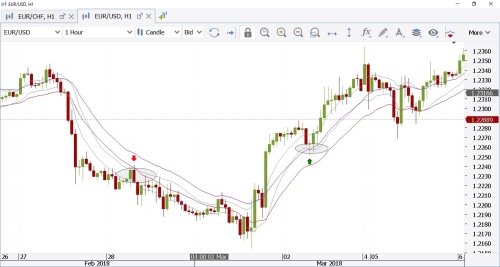 All of us know how important it is to get the entry and the risk : reward ratio of trading strategy right or else we may end up in loss even if the idea behind the trade setup is fabulous. Keeping this in mind I tried to optimize the entry level and then made the risk : reward ratio of 1 : 2. Every trade will have a Target of 40 pips while Stop loss of 20 pips. It will help us break-even with even below 50 % of our trades closing in profit.

Trade Algorithm's Setup
Now we will look into the details of trade set up. 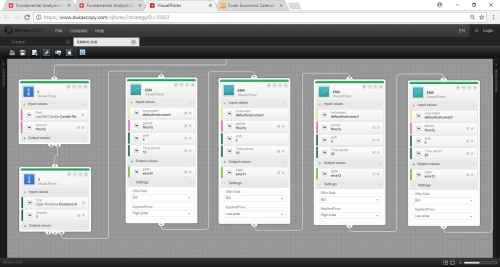 I have based the start of algorithm on candle and candle period has been defined to one hour. A trade will open only when there is no existing trade position open. I have taken four 'EMA' blocks, two of EMA 10 each and two of EMA 20 each. First is of EMA 10 (High), second of EMA 10 (Low), third of EMA 20 (High) while fourth is of EMA 20 (Low). 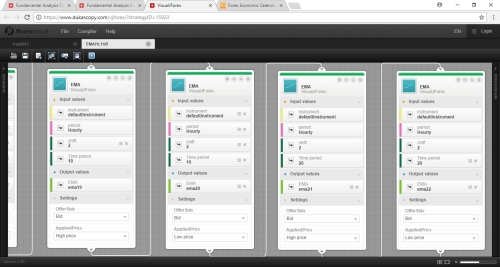 To refine the entry point I have added four more blocks of same EMA combination with shift set at 2 so that entry trading conditions can be restricted to only fallowing two hours after the our EMA formation (as explained in earlier paragraphs) is in place. 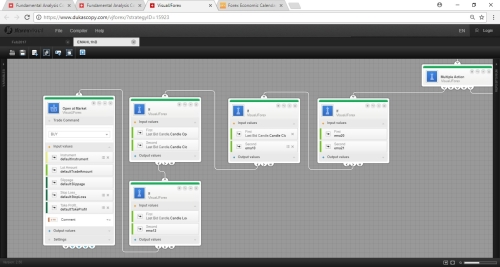 I have used four 'IF' blocks to design the logic behind the entry. If EMA 10 (Low) is greater than EMA 20 (High) then it will check if latest hourly candle has closed below the EMA 10 (High). Further requirement is that the candle's low should be below EMA 20 (High) and it should come back to close higher than it's open price. The logic behind it is that the price should be in minor correction phase and then it is getting support of buyers in the market which is pushing the underlying instruments price back in upward direction. 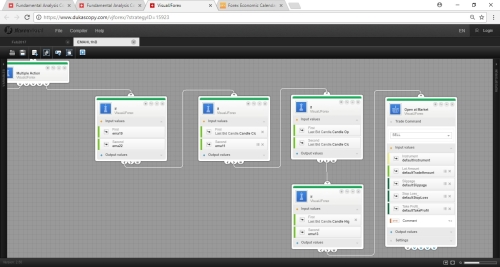 Similarly, for defining a entry point for a sell trade I have used four 'IF' blocks to design the logic behind the entry. If EMA 10 (High) is lower than EMA 20 (Low) then it will check if latest hourly candle has closed above the EMA 10 (Low). Further requirement is that the candle's high should be above EMA 20 (Low) and it should come back to close lower than it's open price. The logic behind it is that the price should be in minor correction phase and then it is finding resistance of sellers in the market which is pushing the underlying instruments price back in downward direction.

Back Test to check efficiency
Here I have included the results of the strategy algorithms of last six months keeping in mind the space constraints. I feel it is long enough time to check the performance of algorithm in varied conditions. 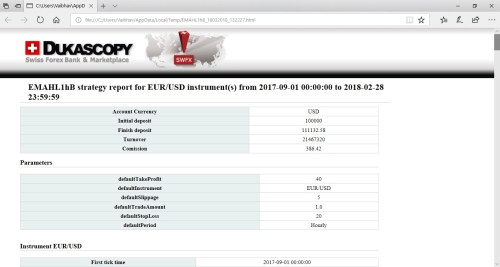 Trade amount is chosen at USD 1 million as the loss if incurred will be limited to 2 % of our initial capital of USD 100k. We won't feel much constrains to take further trades even if last two three consecutive trades have ended in loss.

Now if we look at the nine trades executed over last six months we see four trades have closed in loss while five in profit thus keeping our win : loss ratio barely above 50 %. Still we have managed to make impressive returns compared to small risk we undertook.

I hope all of you find my humble efforts worthwhile and give me your suggestion to any possible improvement which can increase our returns while keeping the risk to minimum.
Translate to English Show original Toggle Dropdown