This new idea of a market (or bazaar, or exchange, or any other name it might go by) seems great to everyone. Everybody leaves the meeting and spends the rest of the week preparing for the big Saturday ahead of them. The sun rises Saturday morning and the town square is full of excited participants and the air is filled with the buzz of buying and selling. Many of these people will be doing plenty of both since they need to sell their items for florps and then buy the things they need with those florps. (I know, I know. Just stick with me here)

Aaron Applegrower is eager as his first customer approaches and sees his basket full of apples. Of course, the first question is, “How much do you charge for an apple?” Again, remember that there’s no magical force dictating price: The power of pricing is in the hands of the two parties who are trying to exchange something. Up until this day, Aaron has always traded with Frank at the rate of 2 florps for 1 apple. That still seems reasonable enough and so that’s the price he quotes to this new customer, who is happy to pay that price. He only needs 1 apple for now, so he hands over 2 florps and gets his 1 apple. Aaron is the seller, this new man is the buyer. 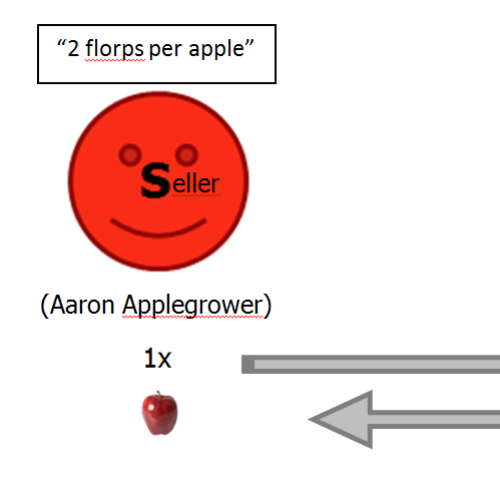 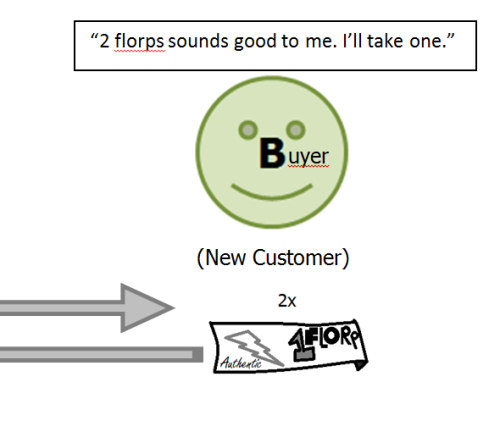 [NOTE: Some of the pictures are split in the middle; this is due to the formatting that this website allows. If this causes any confusion, let me know in the comments and I'll help clarify]

And so this went. As customers approached Aaron, he would quote them 2 florps per apple and if they agreed, a transaction would be made. If they disagreed, they would suggest a different price and Aaron now had the chance to either accept or re-quote yet again. Both sides would continue this process until a price was agreed on or they chose to not do business with each other. This happened for all the other types of items, too. From axes to blankets, the townspeople would quote each other their prices, agree on a price, and make an exchange.

Then something unexpected happens. The market concept was so thrilling that, during the week prior, word spread quickly and plenty of other neighboring towns all decided they should show up and participate. The crowd now begins to grow quite large and it doesn’t take long for these people to realize that they now have to compete with each other. Looking back to Aaron Applegrower, he has now become just another faceless apple merchant among many others.

Fortunately, the large flow of people into this market increases not only the sellers, but also the buyers. While the apple dealers all have to compete with each other, there is also a larger customer base to work with.

But before long, confusion starts to break out. Apple sellers from different towns are all quoting different prices based on the prices they’re used to selling in their own home towns. Potential buyers overhear different prices from each seller and begin to complain. To solve this, the sellers all post their price per apple on a sign for everyone to see. 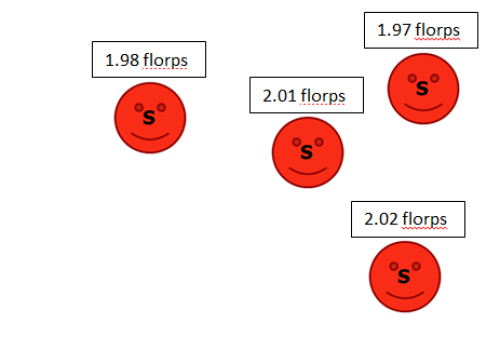 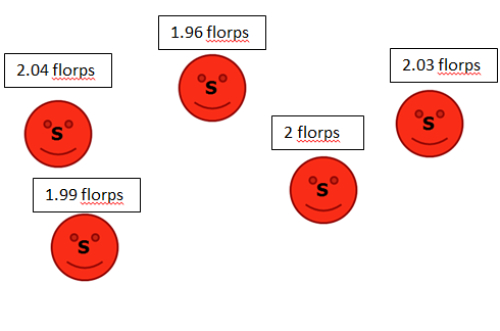 Despite each seller being able to see the price of the other, these people are quite stubborn and keep their prices the same. The buyers are happier, but have one final request: They ask the sellers to line up in the order of their prices to make things easier, which the sellers agree to. 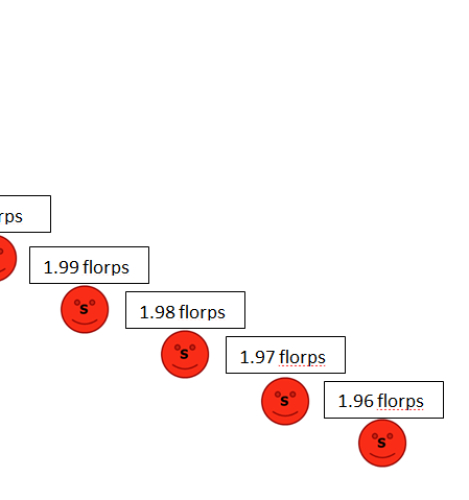 Even though the sellers are accommodative, the buyers had their sassy pants on and thought that all the prices they saw were too high. Since they felt the sellers were asking for too much, they decided to make their own signs showing the most they would each be willing to pay. 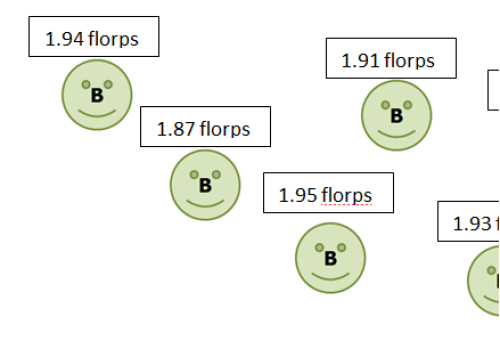 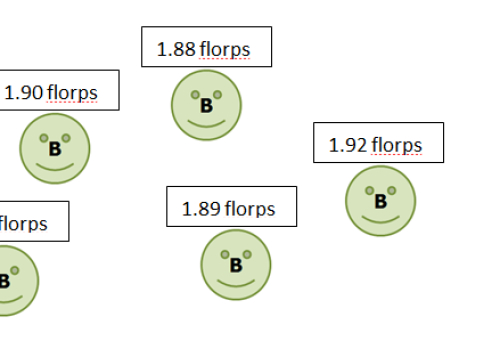 At this point, the sellers are now the confused ones (and maybe a little irritated), so they ask the same of the buyers. “Could you also get into an orderly line to make things easier?” Stubborn yet compliant, the buyers all kept their prices the same and lined up accordingly. 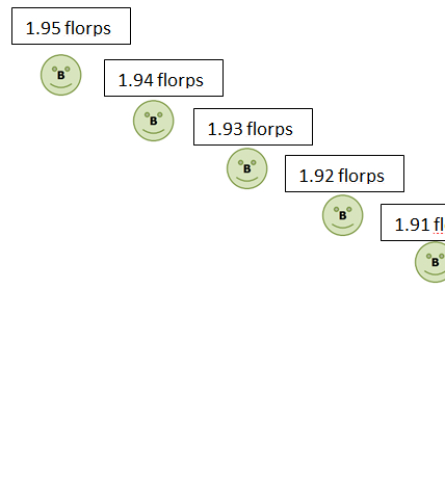 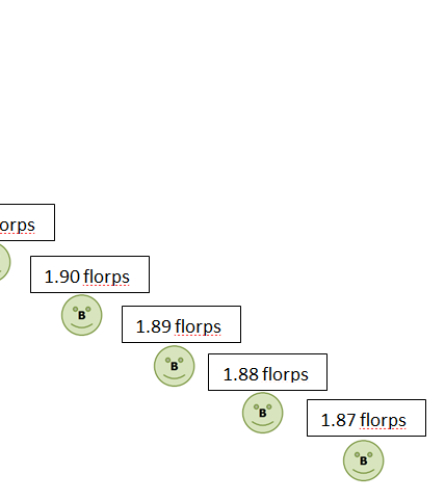 I hope you can imagine what this would look like. It isn’t even noon yet on a Saturday and here we have two rows of stubborn people in the middle of the town square, all holding signs with numbers on them just looking at each other. Well, the day continued and as more people flocked in to check out this “market” thing they heard about, they saw this exact sight. 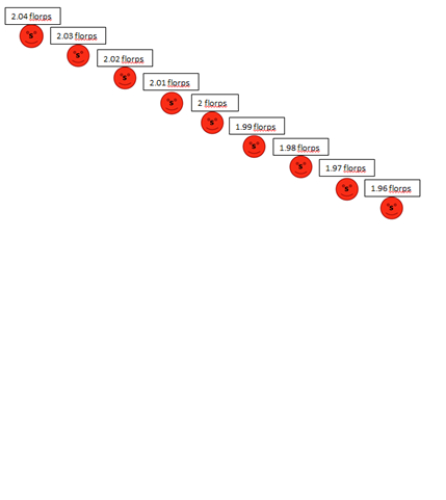 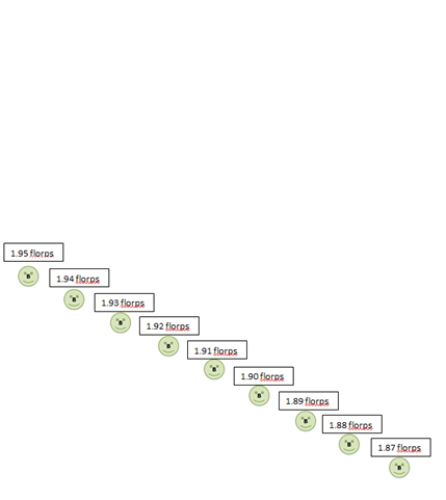 As the explanation clears things up and the initial shock goes away, the newcomers set their minds to do what they came here to do: buy and sell. This is where things really start to get interesting.