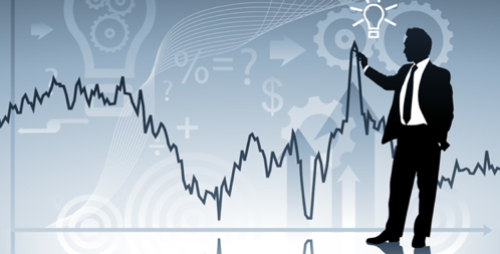 This article is the second part of my last article titled June Chronicles I . These articles are essentially an analysis of market behavior purely from a technical analyst’s point of view. For the analysis, we are focusing on 3Ts: Technical Analysis, Trend and Timing.

The technical analysis method is the use of trend lines on four hourly charts to confirm the market direction. To determine the trend, we use a Simple moving average with a value of 100, and the periods for best entries will be filtered using the Average Directional Index (ADX) indicator.

The last five trading days have been very eventful; if there is anything I am learning from this month’s trading activity; it is that even though technical analysis will show you the way, fundamental information is the spark that lights up the trend.

Going into the month of June, the first sign that the trend was changing on the Eurusd occurred around 07:00 on the 2nd of June, when the market closed above our 100SMA. 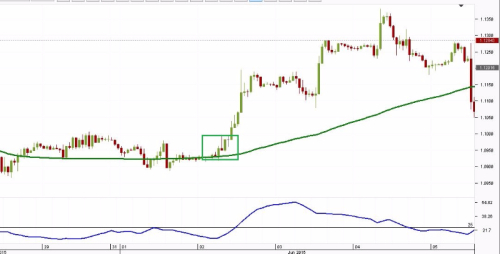 A few hours later, market volatility was confirmed when the ADX indicator went above 25; signifying a strong trend back by volatility and momentum. 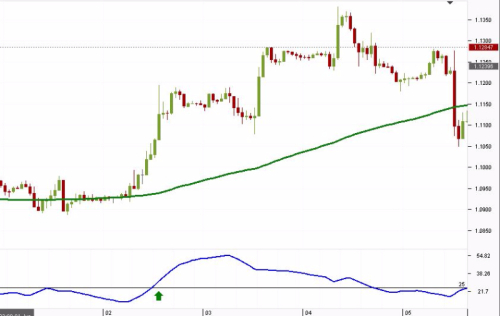 The final confirmation was when the market closed above the trend line.

All these happened within the space of three hours. An appropriate place to place a stop loss for such a trade would have been below the recent low of 1.0888.

As a technical analyst, I am purely interested in the market charts. But once in a while, it is important to find out the economic reason behind some changes in the market trend.

Most traders are aware that the European Central Bank (ECB) unveiled its quantitative easing program on the 22nd of January 2015, and the subsequent effect of this program was a sharp decline in the value of the euro.

Quantitative easing simply put means a process by which a central bank floods the market with excessive cash. The aim of this is to stimulate economy growth by providing liquidity and tackle deflation.

It has been over five months since the ECB unveiled its QE program; then the ECB President Mario Draghi came out on the 3rd of June 2015 to hail the success of the program. The ECB then reviewed its inflation forecast upwards; basically they were saying the program was working and the economy was getting better. As soon as word got out, the euro began to gain. As it gained, trend lines were broken and long signals were generated.

Another economic event worthy of note was the Non-Farm report, which was released on the 5th of June. This data reports the number of employed people in the United States during the previous month. The data does not factor in those employed in the farming industry. The report showed employment gains and triggered a big sell-off on the Eurusd, with the United States dollar gaining across the markets.

First, we had a sharp close of the market below the moving average,

then the trend line gave way to a sharp decline in price. 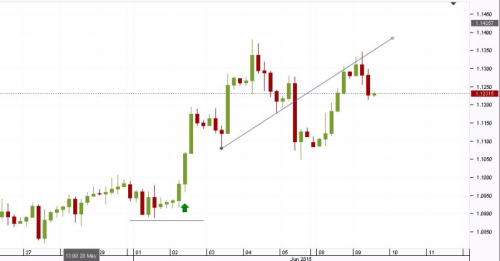 We later see how the market made its way back above the moving average.

The reason for this is pretty simple, the Euro is fundamentally strong. The reaction to the Non-farm report was a temporary decline in reaction to fundamental information.

I have also been keeping an eye on the Gbpjpy. Some hours ago, the market closed below the 100SMA, supported by the ADX indicator showing that the downward trend has momentum. 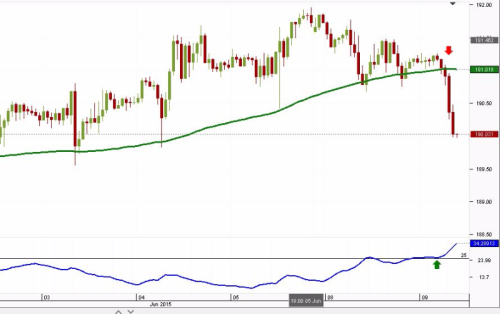 A quick look at the four-hourly trend line shows a break.

At this point it is safe to say the trend is down, and we should only be considering short transactions.

What to expect from the Eurusd

The Eurusd has an upward trend, and the idea is to find only long transactions. Before we can confirm a trend change, the four-hourly trend line at 1.12000 would have to be broken.

I have marked the area with a blue rectangle.

Instead of breaking the trend line, we could see a reaction upwards. So monitoring the moving average on the hourly chart is necessary.
I hope you all have enjoyed the article, and I wish you all safe and profitable trades.
Translate to English Show original Toggle Dropdown