Community
Article contest
Is Ichimoku Strategy Still Profitable on Fx?
The name Ichimoku Kinko Hyo, which translates to "Equilibrium chart at a glance" aptly, describes the system.
Ichimoku Kinko Hyo has been used extensively in Asian trading rooms since Hosoda published his book and has been used successfully to trade currencies, commodities, futures, and stocks. Even with such wild popularity in Asia, Ichimoku did not make its appearance in the West until the 1990s and then, due to the utter lack of information in English on how to use it, it was mostly relegated to the category of another "exotic" indicator by the general trading public. Only now, in the early 21st century, are western traders really beginning to understand the power of this charting system. How it is to be used, as described below:
The Ichimoku chart is composed of five (5) separate indicator lines. These lines work together to form the complete "Ichimoku picture". A summary of how each line is calculated is outlined below:

The senkou span A and B deserve special mention here as they, together, form the Ichimoku
"KUMO" or cloud. 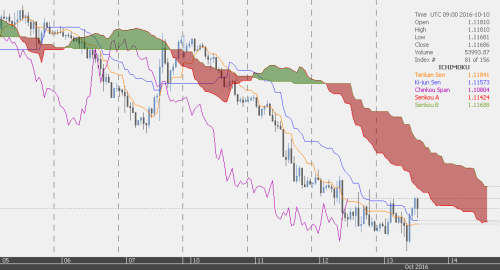 Let's check how it works in automated backtests.

For backtests purposes EURUSD- the most liquid pair on 1Hour period chart is used.

Entry
The entry for the Tenkan Sen/Kijun Sen cross is very straightforward - an order is placed in the direction of the cross once the cross has been solidified by a close (of previous candle). The lot/position amount is calculated on max risked capital and depends on strenght of the signal:
Stop-Loss Placement
The strategy stop-loss is determined and managed by the Kijun Sen itself. When entering a trade upon a Kijun Sen cross, the strategy checks the current value of the Kijun Sen and places stop-loss 5 to 10 pips on the opposite side of the Kijun Sen that entry is placed on (this manually input variable might be optimized in Strategy Tester for each instrument for the best results). When looking to enter Short, the strategy will look to place their stop-loss just above the current Kijun Sen and when looking to enter Long, the robot will place stop-loss just below the current Kijun Sen. Once the trade is underway, the strategy moves stop-loss up/down with the movement of the Kijun Sen, always maintaining the 5 to 10 pip "buffer" (input variable). This way, the Kijun Sen itself acts as a "trailing stop-loss" and enables the strategy to keep a tight hold on risk management while maximizing profits.

Exit
Exit signal is a Tenkan Sen/Kijun Sen cross in the opposite direction of open position.

Test results
As trend following strategy it needs trend to be profitable. While choppy and sideways market it can constantly lose money. But together with range and breakout systems it can superbly diversify your portfolio.

Conclusion
Classic trend following strategy still can be profitable in trending market conditions. The profitability depends on instruments and some say that Ichimoku works better on indices and equities markets. If you wish to calculate PF, sharpe ratio, drawdowns my Ichimoku strategy is now free for demo and live trading. There are some additional features that let's you maximize profits, sharpe ratio etc.