We've all been there, you put on a trade and it shows you
some profit, then all of a sudden the spread widens considerably and your
stop-loss is hit, causing you to lose money. A few seconds later the spread
goes back to normal and the price quickly resumes its previous (profitable)
trend, but you no longer have a trade on.

Or you've placed a buy stop order to open a new position if
the price reaches x, it is triggered when the spread widens, but as soon as the volatility subsides the price returns to where it was before the chaos
started, ie. much lower than x, so you now have a losing trade on your hands. 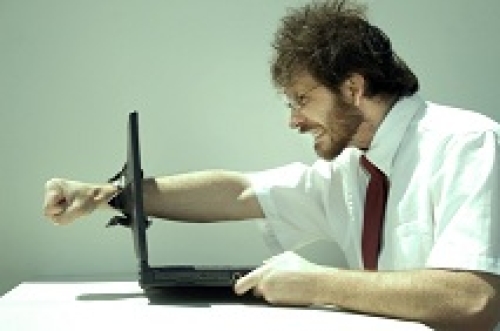 This trader lost a lot of money due to widening spreads...

This article will show you how to avoid having
an opening or closing order prematurely filled, due to the spread widening
during important news or off market hours, using the different order types
provided by Dukascopy.

In a well-functioning financial market, where prices are
dictated by various market participants (and not by a single entity/market
maker), instruments do not have fixed bid/ask spreads. Usually, the higher the
liquidity, the lower the volatility, and therefore the tighter the spread. So
highly liquid currency majors such as EUR/USD and USD/JPY have tighter spreads
than exotic pairs such as USD/RUB or USD/ZAR.

However, even major pairs can experience wider
than normal spreads during volatile periods, such as interest rates
announcements, GDP reports, unemployment figures, to name a few examples. There
will also be wider spreads during off market hours,  when there is only a fraction of the participants in the market,
so the liquidity is lower. This can be seen when the markets open for the Asian
session, at 21:00GMT Sunday, for example.

► What happens when spreads
widen?

Imagine that EUR/CHF is trading at 1.20104/1.20125
at the end of the Asian session, a spread of 2.1 pips, and that in a few
minutes time the Swiss National Bank (SNB)
will announce something important regarding the CHF peg with the Euro. The
market sentiment is divided, some traders think the CHF will strengthen
dramatically, others have the opposite opinion. The liquidity in the pair dries
up seconds before the announcement and the volatility is extreme. This is
reflected in the spread, which widens to 32.1 pips.

When the spread increases the ask price goes up
x pips, and the bid price goes down usually the same x pips (more or less), in
our example 15 pips. So, even if the "middle price" remains static,
you can have way lower/higher bid/ask prices respectively: 1.19954/1.20275.
The SNB speech is not as important as the market assumed so the prices quickly
return to normal, back to 1.20104/1.20125. Note that the
"middle price" is always the same in this example.

The vast majority of Forex brokers offer only a few order
types: market, limit and basic stop orders. These basic stop orders to buy
(either to open a position or as a stop-loss) are triggered when the market's
ask price hits or breaches the price level specified (buy
"ASK ≥ Stop"), and stop orders to sell are filled when the bid price hits or
drops below the price level specified (sell "BID ≤
Stop").

Fortunately, Dukascopy gives us the possibility
of indicating either bid or ask prices when we place stop orders, so we can
have buy "BID ≥ Stop" and sell "ASK ≤ Stop" orders,
and, as I will explain, this is a "must-have" feature when
choosing a broker, as important as comparing spreads and commissions.

► How to correctly open a
position

For the sake of simplify, this article assumes that you use
bid prices as the default on your charts and trading strategies.

Using the previous EUR/CHF example, imagine that you wanted
to open a short position if the price dropped below 1.20000, so you had
placed a sell stop order at 1.19999. If your broker offered only the
normal stop orders which are triggered by the bid price, your order would have
been filled at 1.19954 because the bid price did get below 1.19999.
However, that was not a normal market price, so your trade is now showing a
significant loss when things got back to normal.

To avoid this situation using Dukascopy's platform, you would add the normal market spread (let's say 2 pips just to keep things simple, it is lower than that during the London and NY sessions) to the bid price you want (1.19999), and place a sell "ASK ≤ Stop" order of that sum: 1.20019. 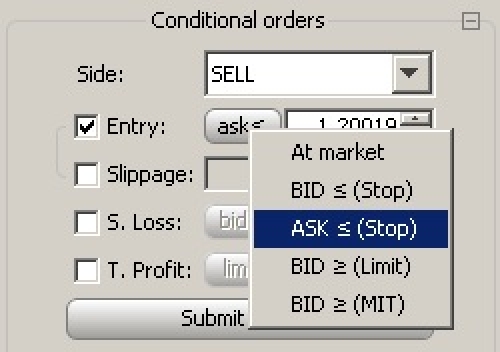 So only if the ask price dropped
to or below 1.20019 the order would have been triggered. This didn't
happen because the ask price rose to 1.20275 during the volatile period,
so you were no way near of having your order filled. 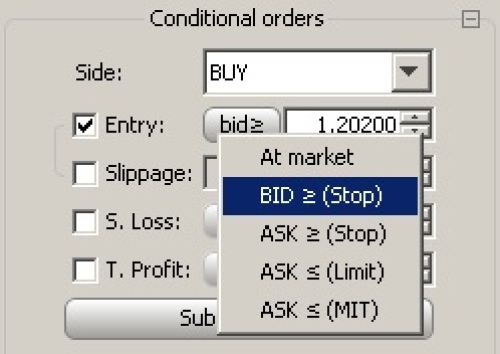 As you can see it also would not have
been triggered during the high volatility period. Note that long positions are
always filled at the ask, irregardless of the order type you use.

► How to correctly place
stop-loss orders

You are long EUR/CHF and want to close the position if the
price drops below 1.20000, so you placed a normal stop-loss order at 1.19999.
The market goes wild for a few seconds, the bid price reaches 1.19954
and you are stopped-out. Again, using the proper order type would have avoided
this situation. To correctly place a stop-loss on a long position, you need to
do exactly the same as if you wanted to open a new short position. Add the
normal market spread  to the bid price
you want (1.19999), and place a sell "ASK ≤ Stop" order of that sum: 1.20019. You would not have been
stopped-out. 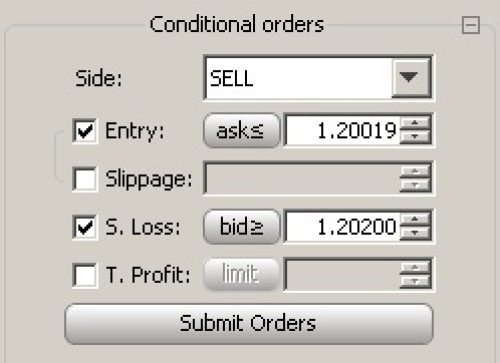 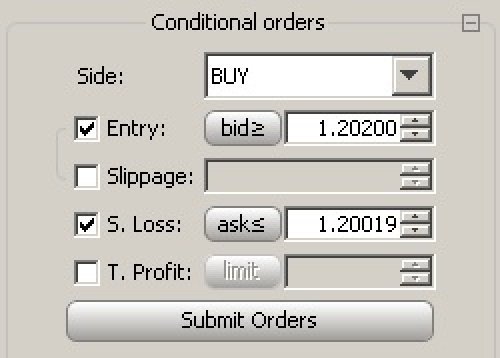 Don't mix up the two and never use "BID ≤ Stop" or
"ASK ≥ Stop" orders,
or brokers which only offer those stop orders. There are only a handful of
Forex brokers out there that offer the order types a serious trader needs.

Feel free to leave a
comment or any questions you may have.