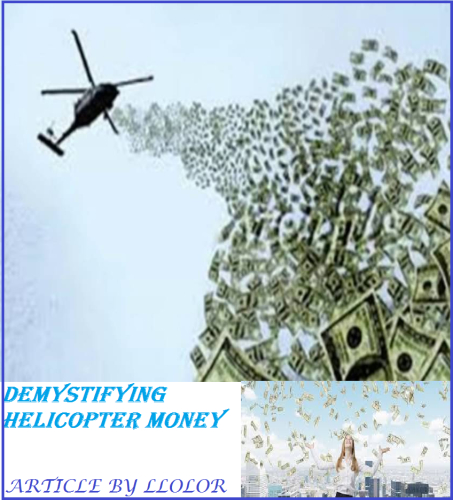 The global economy is in turmoil and central banks from the breath and width of the globe are struggling to spur economic growth in 2016. They have deployed most the weapons in their arsenal in a desperate attempt to spark economic growth, including negative interest rates and massive stimulus packages but the much need growth remains elusive. Consequently, central banks are looking for new ways to spark economic growth, and the use of unconventional means such as "helicopter money," have become topical issues.

This article seeks to demystify the concept of helicopter money, making it clearer and easier to understand to the ordinary person.


What is Helicopter Money?

Helicopter money is a reference to an idea made popular by the American economist Milton Friedman in 1969 in his paper “The Optimum Quantity of Money.”

The basic principle is that if a central bank wants to raise inflation and output in an economy that is running substantially below potential or targeted levels, one of the most effective tools would be simply to give everyone direct money transfers. In theory, people would see this as a permanent one-off expansion of the amount of money in circulation and would then start to spend more freely, increasing broader economic activity and pushing inflation back up to the central bank’s target.

A variant of the helicopter money will be a broad-based tax cut. If the fiscal tax cut is accompanied by a programme of open-market purchases to alleviate any tendency for interest rates increases, this would effectively stimulate consumption and hence to prices. Even if households decided not to increase consumption but instead rebalanced their portfolios by using their extra cash to acquire real and financial assets, the resulting increase in asset values would lower the cost of capital and improve the balance sheet positions of potential borrowers.


What they said about helicopter money.

Below are some of the famous quotes about the concept of helicopter money. 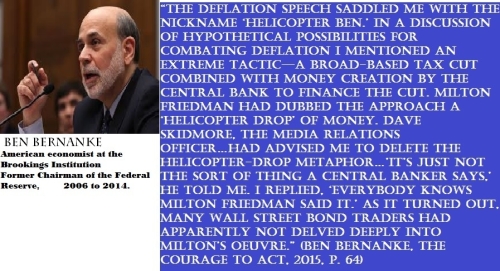 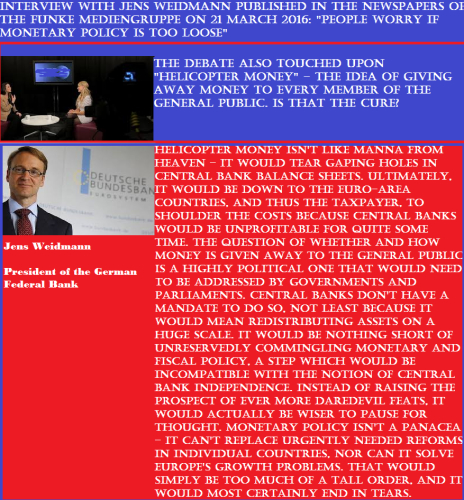 By definition helicopter money describes a situation where central banks distribute cash directly to individuals or households. Under this strict definition, the “helicopter” drops are simply transfers from the central bank to the individual, households or the private sector financed with base money.

However the definition has been expanded in modern times to other possibilities, such as granting a universal tax rebate to all households, financed by the central bank. This is for example what Australia did in 2009. The use of tax rebates explain why some consider helicopter money as a fiscal stimulus as opposed to a monetary policy tool.

If successfully implemented helicopter money will result is an increase in the money supply, thereby targeting higher inflation. It also increase aggregate demand in the economy when conventional monetary policy has failed (for example negative interest rate policy and quantitative easing.)

Quantitative easing provides capital to financial institutions, which theoretically promotes increased liquidity and lending to the public and private sector, since the cost of borrowing is reduced because of the increased money supply. Quantitative easing aims to encourage banks to give out more loans to consumers at a lower rate, which is supposed to stimulate the economy and increase consumer spending. The use of the newly printed money to purchase securities theoretically increases the size of the bank reserves by the quantity of assets that were purchased. The effects of QE could be reversed by the sale of securities.

On the other hand helicopter money puts the money directly in the individuals’ pocket thereby generating demand, which comes from the ability to increase spending without the worry of how the money would be funded or used. Although households can decide to put the money in their savings accounts rather than spend it, consumer consumption will eventually increases if the policy remains in place over a long period of time. The effect of helicopter money is theoretically permanent and irreversible because money is given out to consumers, and central banks cannot retract the money if consumers decide to place the money into a savings account.

One of the biggest obstacles to helicopter money is the legality aspect. It can be argued that helicopter money would be outside of the mandate of central banks, because it is in effect a fiscal policy tool and not a monetary one. Depending on how it is implemented the legality may be a major stumbling block.

Pros and cons of Helicopter Money

The impact of helicopter money on various asset classes is based on its objective to stimulate demand and create a positive inflation.

If Helicopters Create Positive Inflation then the fear of currency debasement and inflation will tend to create demand for alternative stores of value. Investors will turn their attention to inflation-friendly assets, such as gold, silver and oil thereby increasing their prices.

The impact of helicopter money is less cleat on bonds, though there will be an increase in the demand for inflation linked bonds. The conventional bonds will most likely underperform the other asset classes if the inflation experience is above that which was assumed when the bond was issued.

Helicopter money is still a concept in its infancy in the present day macroeconomic setting. However with most central bankers turning to the unconventional means to stimulate the economy, helicopter money could be a possibility in future.
Translate to English Show original Toggle Dropdown