Back in May and June the euro weakened substantially versus the us dollar and by all appearances it looked like it would be revisiting the June 2010 low of 1.1875. In addition, the euro's weak yearly high of 1.3486 gave some indication that it would even fall below that level.The Greek debt crisis and credit downgrades of several European countries put severe downward pressure on the euro. 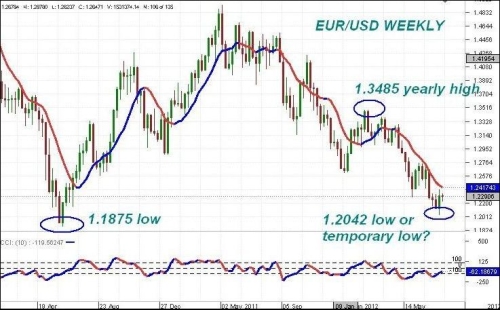 Looking at the daily chart, what we have seen however is the euro forming a (temporary?) low of 1.2042 on July 22nd and that is where it started to gather market support on the following days. On the daily chart we can see the 2 candles preceding the July 24th candle reaching higher lows as did the 2 candles that followed The July 26th candle . In fact the 2nd candle that followed the July 26th candle made it above the sma10 and the cci(10) broke above 0. This kind of formation gives a strong indication that a low has formed at that level (see my artcle http://www.dukascopy.com/fxcomm/fx-article-contest/?Picking-Tops-And-Bottoms&action=read&id=906#read-article). 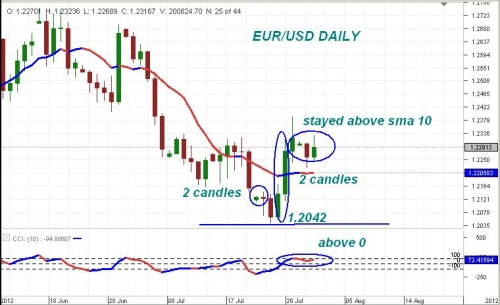 Looking at the daily chart again we see that on the following days the candles stayed above the sma10 and cci(10) 0. A case could be made that a high has formed on July 27th when the euro reached 1.2389 on account of the candle formation. The 2 candles on the left and right of the July 27th did reach lower highs. However the 2 candles that followed to the right of the July 27th high did not sink below the sma10 and cci (10) 0. Thus in all likelihood that July 27th hgh is a temporary high and the euro can be expected to start trending higher in the coming months. 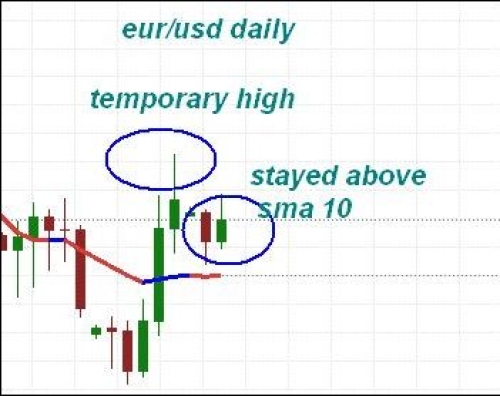 HOW WILL ALL OF THIS PLAY OUT?

We need first to take a look at what needs to happen to confirm that the euro will start trending higher. Looking at the weekly chart The candle for the week of July 22nd did form the low of 1.2042 but it is also a rather strong bullish candle as it also made it to a high of 1.2389.The 2 preceding candles reached higher lows, and the following 2 candles would need to form higher lows with the (preferably) second candle going above the sma10 . It would need to break above 1.2411 for the euro to start trending higher.Ideally this is what would need to happen. However there most likely will be some consolidation and all and all as long as the 1.2042 support holds it is very likelly that the euro will be trending higher in the coming months. 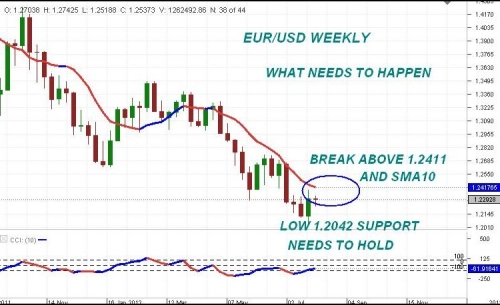 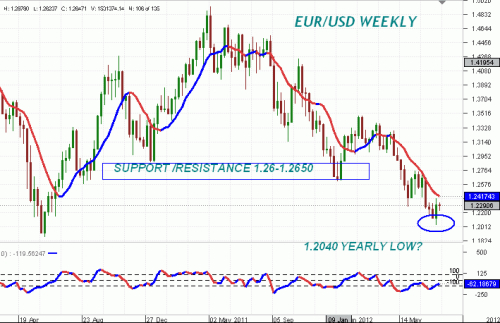 Now if the euro does not fail at the 1.26-1.2650 level but rather gathers support then there can be no doubt that the market has reversed and the euro will be on an upward trend for the remainder of 2012. Of course we can expect periods of (Greek) drama and some europhoria and the attendant choppy trading, but all in all we will see the euro in an uptrend.