Community
Article contest
Has Macd Always Been a Reliable Indicator in Fx Trading?

The Moving average convergence divergence (MACD) indicator, which was fist created by Gerald Appel in 1960s (DailyForex,2012), has been classified as a momentum indicator and is a valuable and popular implement for Forex traders.

There are four general methods used to interpret the MACD as following:

Signal line crossovers are the most general MACD signals. The signal line, which is a 9-day EMA of the MACD Line, trails the MACD and facilitate to spot MACD turns.

As shown in the (figure- I), When the MACD cross beneath the signal line (from up to down); it represents a bearish signal for a currency pair. This gives an indication for traders to sell the currency pair or short it. On the contrary, if the MACD moves above the signal line (from down to up), then the market is supposed to be in an upward movement, representing a bullish trend which many traders may go for long positions. 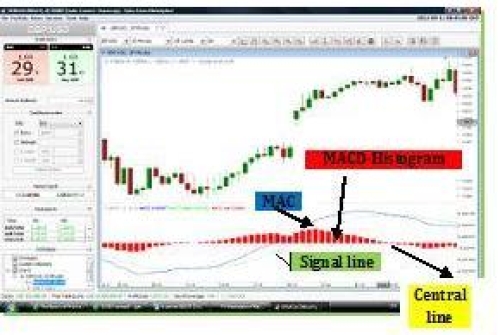 When the price of a currency pair deviates from the MACD, It signals the end of the current trend. Such a thing mostly happens when the price moves in one direction and MACD in another direction.

To trade in the MACD Divergence, as presented in the (figure- II), when MACD line cross signal line, we have a point (top or bottom) to evaluate. Refers to most recent MACD line tops or bottoms, corresponding tops/bottoms must be found. Then MACD of tops/bottoms must be drawn in the form of a trend line and connected as same as chart tops/bottoms, to assess them. It has been suggested to find two most recent swings high or low on the chart and draw a trend line through them. When MACD divergence emerges and MACD line crosses over its central point, it is a good signal to enter to the market or place an entry order on the break out of that trend line.

MACD divergence trading method used not only to predict trend turning points, but also for trend confirmation. A current trend has high potentials to carry on unchanged in the case no divergences between MACD and price have been established after most recent tops/bottoms evaluation. 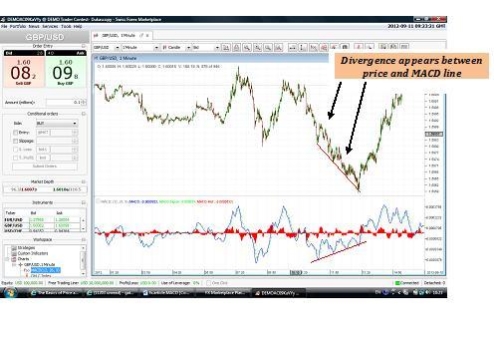 When the MACD rises dramatically, the shorter moving average pulls away from the longer-term moving average. This is a signal that the currency is overbought and will soon return to normal levels. In other word, as presented in the (Figure- III), when the MACD deviate from the signal line significantly, it suggests that the specific currency is in an overbought condition. This means that traders are likely to sell and go short for the currency. This situation could happen in the opposite direction, which will create an oversold condition.

ü One of the main advantages of MACD indicator is that it can be used mutually as a momentum and as a tendency indicator.

ü MACD could be a effective way to quickly evaluate the market momentum and trend.

ü The MACD indicator is not the most reliable indicator when the forex market is very volatile and choppy as it gives false signals.

ü Another serious drawback of the MACD is that it tends to be more expressive than analytical; therefore, it is more appropriate for understanding the market trends rather than forecasting it.

ü MACD is sometimes very tricky to be interpreted/implemented effectively

ü When the Forex market is very volatile, the possibility of giving fake signals is too high. Even though, many traders wait for a confirmed cross of MACD above the signal line before entering into a position to avoid getting "faked out" or entering into a position too early, is not enough. Thus, When the Forex market is very volatile, MACD is required to be used in the corporation of other appropriate indicators, For Example, the FX Market Sentiment Index evaluate effective provisional interest in currency pairs and currencies, and therefore could be used as a supplementary indicator. The FX Market Sentiment Index (such as SWFX Sentiment Index in the Dukascopy) can be an important instrument for FX trading. The Index is based on transaction stream information and is intended to demonstrate long and short ratio in the most popular currencies and currency pairs combined by liquidity consumers and providers in the FX marketplace (Dukaspopy,2012) The FX Sentiment index can become an additional substantiation filter and consequently support or reject of trading signals from MACD divergence. If MACD indicator gives a Bullish signal on a specific currency and the sentiment indicators for that currency is overbought, it is better to stay away from entering into position. If the MACD strategy gives a Bearish signal and the sentiment indicator are overbought or at least neutral for that currency, the prospect of a successful trade is enlarged.

The MACD indicator is a very accepted and popular used in the Forex technical analysis. It provides traders the ability to recognise short- term Forex market trends and momentum promptly. On the other hand, it has several drawbacks, which show that it is not always the most reliable, and realistic indicator for predicting market movements, especially when the market is very volatile. Thus, it should be used in combination with other appropriate indicators.